Home » Fashion » If Melania wants a focus on what she does, she should do something

"I wish people would focus on what I do, not what I wear."

So said Melania Trump to media gathered in front of the Sphinx for a photo op with the first lady on her African tour which could have quite easily have been mistaken as the press launch of a new Indiana Jones movie. 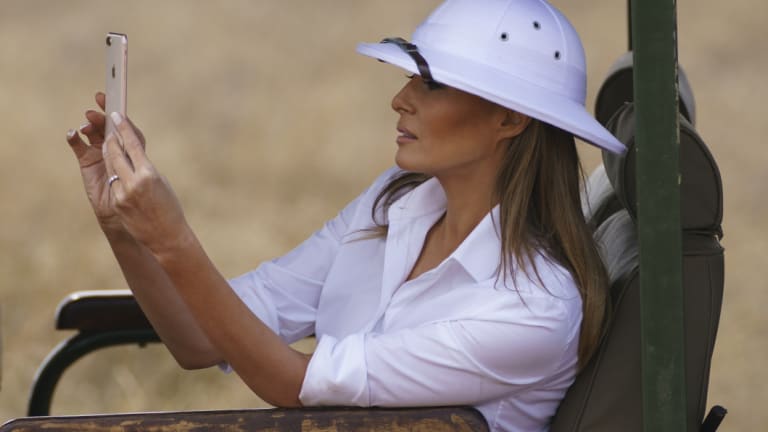 Trump came under fire last week for wearing a pith helmet, an item of clothing associated with European colonial officers, while on safari in Nairobi National Park. The social media reactions were swift.

Of course, it wasn't just the hat. On her four-country tour of Africa (which wrapped up in Egypt on the weekend) Trump's wardrobe had a bizarre "safari chic" vibe, starting from when she stepped onto her jet in Maryland wearing a pair of leopard print Manolo Blahniks.

She proceeded to dress almost exclusively in tailored whites and tans (from a mix of mainly European luxury fashion brands), an aesthetic that really did make her look a bit like Jane Porter before she met that Tarzan chap.

But Melania Trump doesn't want us to talk about that.

This is a line she's used before, of course, uttered by a White House spokesperson in response to a now infamous Zara anorak jacket bearing the slogan “I don’t really care, do u?” she wore while visiting children held in immigration detention in the US earlier this year. 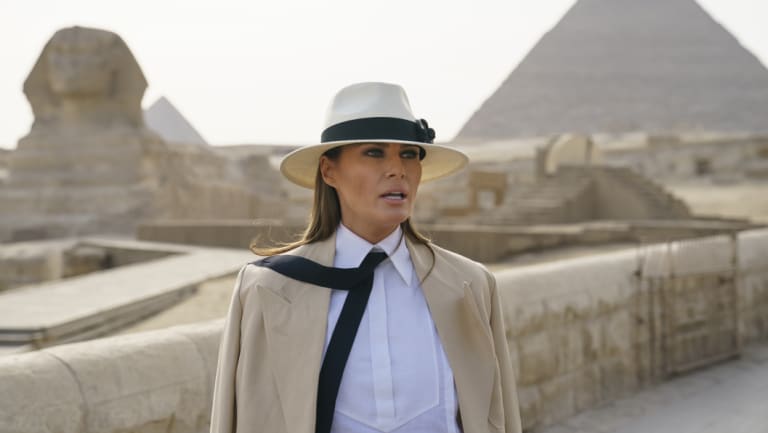 The clothes Melania Trump wore on her African tour were very Jane pre-Tarzan.Credit:AP

It is not a left-wing conspiracy that Melania Trump's clothes are a topic of analysis. Michelle Obama's gowns were subject to thousands of column inches. If Melania wants people to talk about what she does, she should remember that this is part of it.

The first lady of the US – a strange, technically unelected, position which really seems to exist only to free the manly president's mind from silly girly things like children's health and the arts – wears clothes.

And those clothes have power. That's why it is someone's job to select them.

French-US designer Hervé Pierre, who also designed her inauguration gown, is the first lady's stylist. Speaking to the New York Times last year, he explained why he took the job.

"What interests me in this relationship is not just finding pretty clothes – a lot of people can do that," he told the Times. "It’s more about the legacy of this woman. Everybody has a different reaction to what she’s wearing."

On Wednesday, arriving in Nairobi, Melania Trump wore a bright shirt dress with a parrot print. The same aesthetic could have been provided by a number of designers from Kenya's growing fashion scene.

But, alas, it was Erdem.

Of course, what the first lady wears is not her entire job. Nowhere near it.

Melania Trump has her "Be Best" initiative for children's wellbeing. This recent trip to Africa was supposedly to promote it.

Let's be honest, it's no "Let's Move" (Michelle Obama's initiative during her husband's time in office, tied to his national taskforce into childhood obesity). Be Best has been criticised for lacking vision and action, simply a statement that children should be happy. Is it national or international? An anti-bullying campaign from someone whose husband has retained a personal Twitter account seemingly exactly for the purpose? She's hardly dancing on Ellen about it. In fact, she's really not doing much for it at all.

So, Melania Trump, if you want us to talk about what you are doing, please, do something.

Until then, accept that what you are doing is wearing clothes. And ridiculous, offensive ones at that.