Home » Fashion » I've stopped shaving – I love the feeling of air through my leg hair & my husband think it's sexy, too

Research has found that more than half of us have felt less pressure to be groomed since the start of the pandemic.

Natasha Collins-Daniel, 37, a yoga teacher and PR for an environment charity, lives in Bristol with husband James, 38, a graphic designer, and their daughter, seven, and son, four. 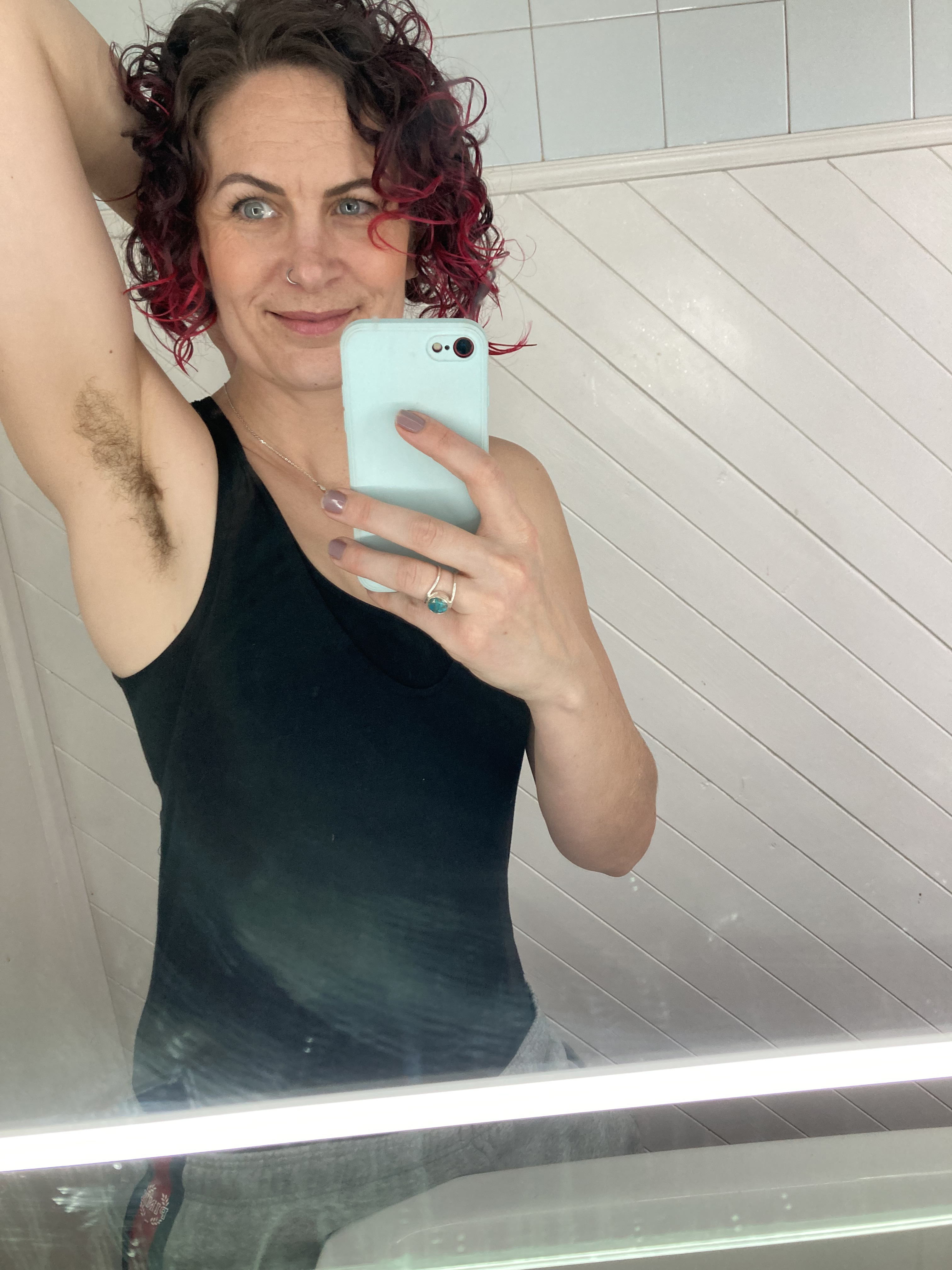 “I remember it vividly – Julia Roberts in that red sequin dress, waving to the crowds at the Notting Hill film premiere.

It was 1999, I was 14, and I had never seen underarm hair on a woman before. Judging by the fevered headlines across the world, I wasn’t alone.

Twenty-two years later, my own armpit hair is even darker than Julia’s, but it feels good to be finally following her example.

My earliest memory of hair removal was when I was 13. I wasn’t particularly hairy, but decided to shave my legs and forearms, just like my friends were doing.

Shaving felt like a rite of passage, a grown-up, womanly thing to do. While I stopped shaving my arms after a few goes, I kept up the leg shaving.

The horrified response in the media to Julia Roberts’ armpit hair really stuck with me. It was obvious that everyone thought it was controversial to see women and girls with body hair.

So throughout my teenage years, I removed the hair on my legs and underarms, and around the age of 18, I began using hair removal cream – and occasionally salon waxing for my bikini line.

I didn’t ever really think about it, as everyone did it and it just became a part of my routine.

I met James in 2006, when I was 21 and we were both travelling around Vietnam. We had mutual friends and hit it off right away.

When we returned to the UK three months later, we moved in together in Bristol, before getting married in 2010.

Through it all I reached for the razor, for my legs, underarms and bikini line, even though the regrowth was often itchy and uncomfortable.

I also knew that James actually thought body hair was womanly and attractive – though he never asked me to stop shaving, and would never dream of commenting on what I should do to my body.

I did try other hair removal methods, but the few bikini waxes I had in my 20s were painful, and the epilator I tried in 2012 wasn’t any better, so I went back to shaving.

It was in 2017 that I finally decided to make a change. By then I was a busy working mum of two kids under five.

I still cared about my appearance – I dyed my hair different colours, wore make-up and painted my nails. Was a bit of body hair really such a big deal?

I kept thinking about my best friend Ruth, who I met in 2011. She had unshaved armpits and was fabulous. 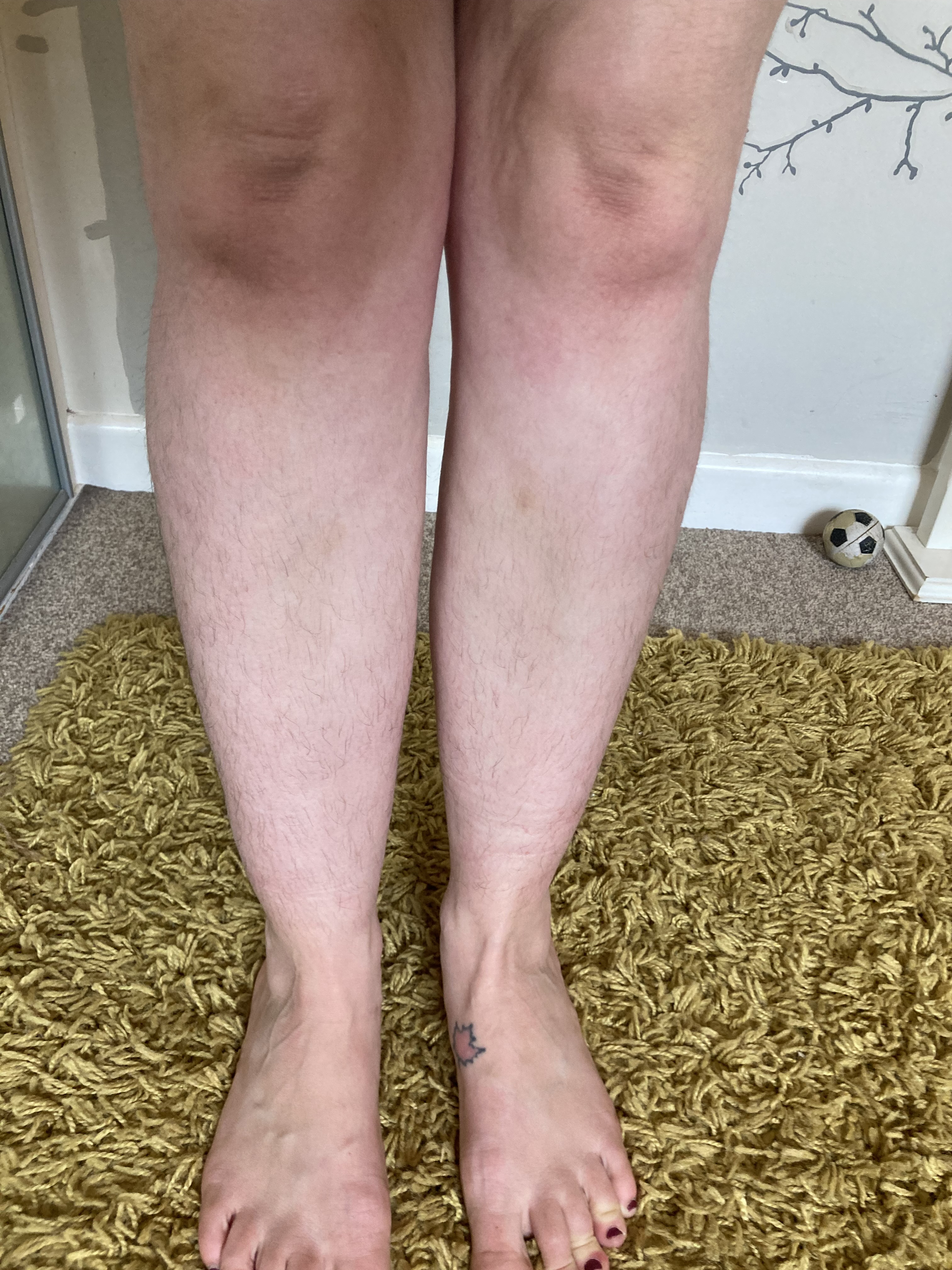 Suddenly, while rushing to jump in the shower one morning, removing body hair seemed like a huge waste of time. So I chucked my razor in the bin.

It felt great right away. I still trimmed my pubic hair a bit, but stopped shaving, and as the hair on my underarms and legs grew, James was happy, too.

Although I didn’t do it for him, knowing that he thought it was sexy made me feel good.

I quickly realised that having armpit hair doesn’t make you any smellier – in fact, I found  it less sweaty. Having hair on my legs felt really great, too.

I’d moisturise to make the hair even softer, and I loved the feeling of the fresh air blowing through it when I walked outside in dresses or shorts.

Even where I live, in Bristol, which has a pretty alternative vibe, seeing female body hair is rare and still a bit taboo. But I found I enjoyed creating a bit of a stir when I reached for something in the office and everyone could see my armpits.

I’ve not had any negative remarks. The only friend who commented simply said: ‘Oh, you’re going French.’

Now, I trim my bikini line and tidy up my eyebrows. But apart from that, I leave my body hair alone. I feel liberated and confident – and ready for any red carpet!”

Caoilfhionn Hanton, 23, is a student and lives in Waterford, Ireland. 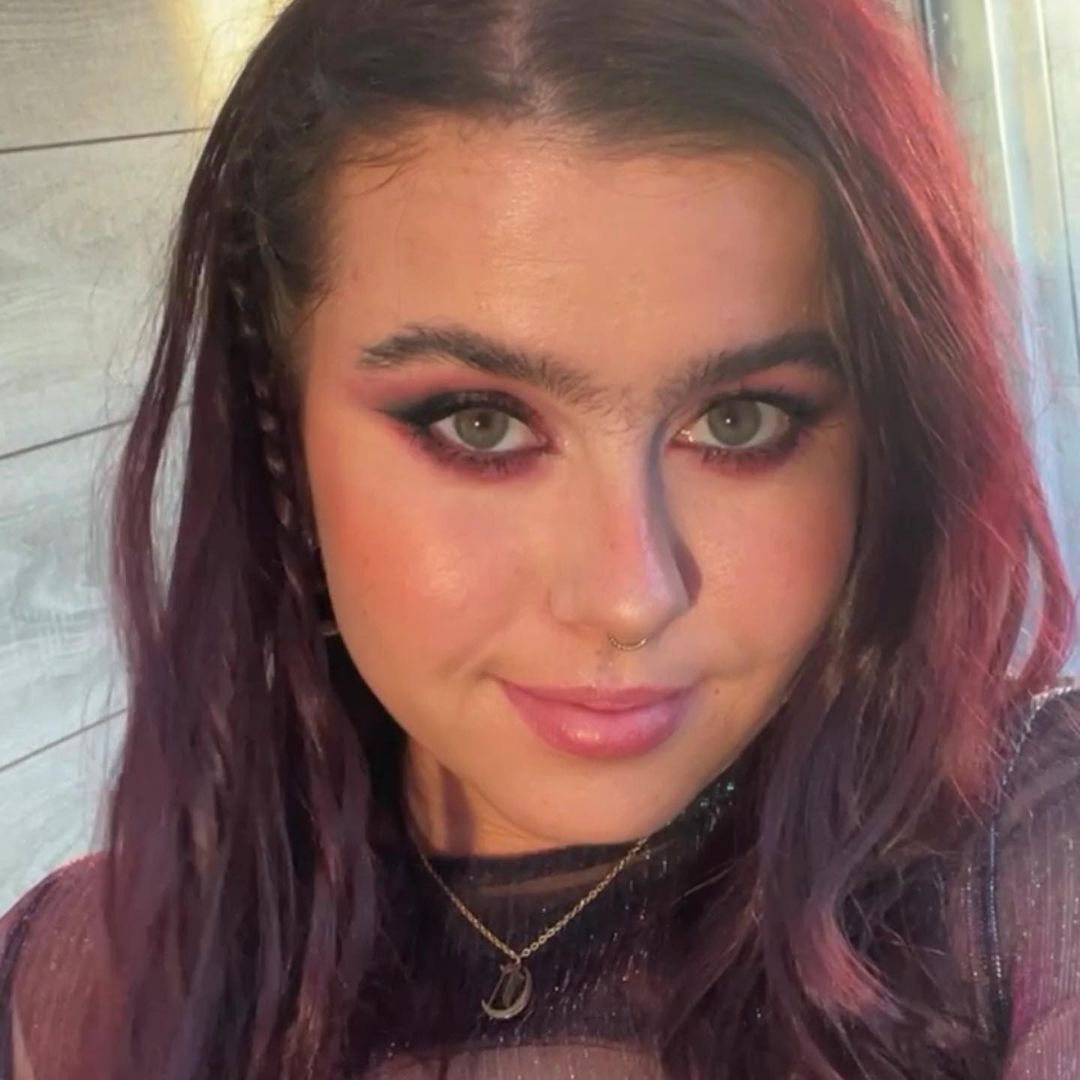 “Sitting in my bathroom, I was ready to use my hair dye. I mixed the solution tablet with some water, and then combed on the gel.

But this concoction wasn’t going on my head – it was for my unibrow. A few minutes later, I rinsed it and then stared at my gorgeous dark brow in all its glory.

I was 11 when I first noticed that my eyebrows were different from everyone else’s. My friends all had two, whereas mine met in the middle and went halfway down my nose.

My mum was a beautician, so I was used to seeing grooming kits around the house. A few months later, I picked up some tweezers and pulled out the hairs. Suddenly I had two brows instead of one – and I liked what I saw in the mirror.

Throughout my teenage years, I plucked my brows after a shower. Sometimes, when I couldn’t find the tweezers, I’d shave them instead.

I never talked about it with my friends, and Mum never mentioned it either.

But in 2019, when I was 21 and in my first year at university studying visual arts, pictures of the Greek-Cypriot-American model Sophia Hadjipanteli started appearing everywhere online. She looked so different with her thick, jet-black unibrow, and I felt inspired.

I began letting the inside edges of my brows grow a bit, and even used eyebrow mascara to make them bushier. But I still removed the hair from the middle.

Then in November 2020, when I was 22, I decided to really go for it. As men grew their moustaches for Movember, I asked friends and family to donate money for me to grow out my unibrow. 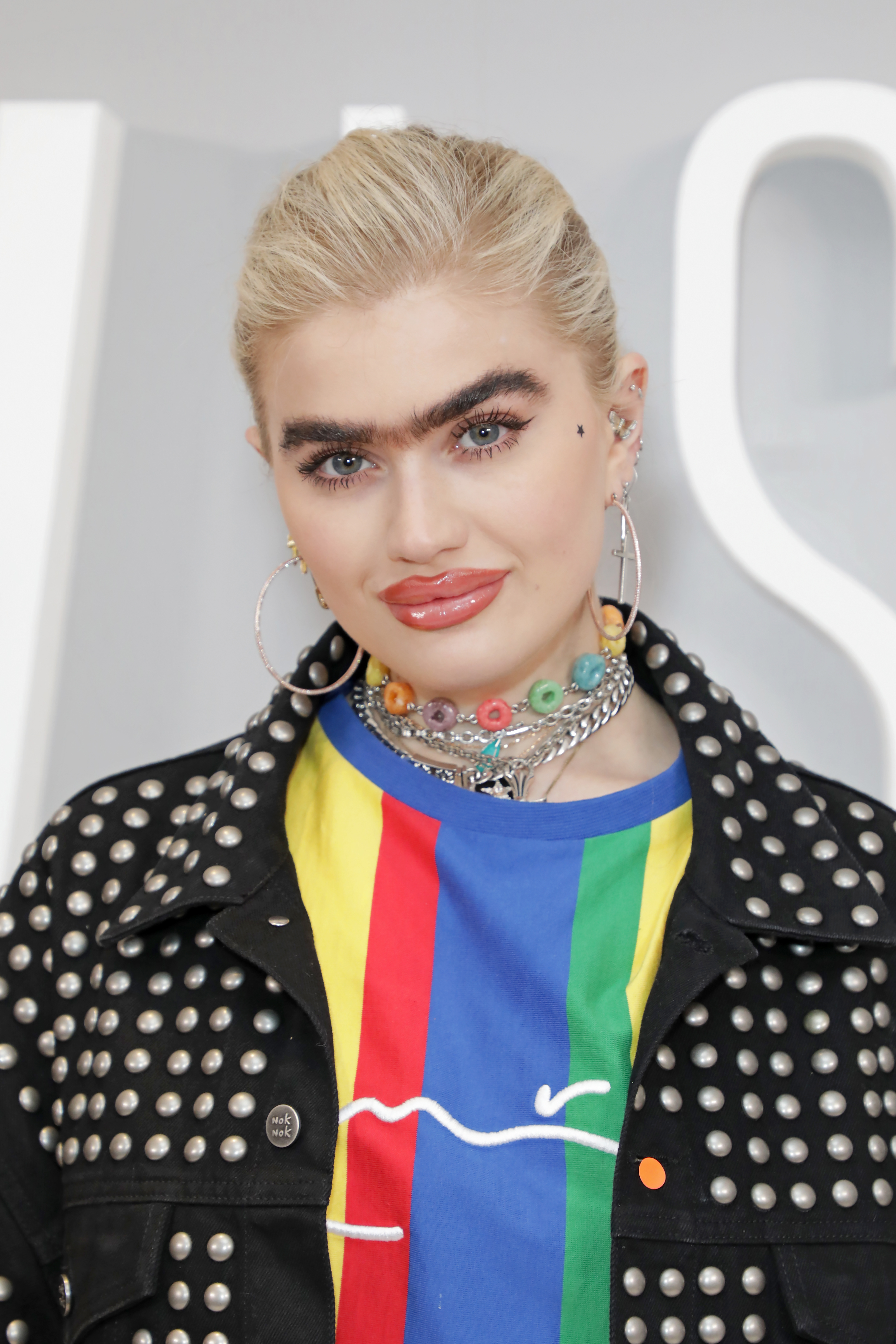 The hairs appeared across the bridge of my nose and down the sides. I used to think it would be insane to leave them unplucked, but I actually really liked it.

Friends and family did too, commenting that I looked European and sophisticated.

By the end of Movember, having raised £260 and received so many positive comments from people, I decided that I wasn’t going to reach for the tweezers again. In fact, I wanted to make my unibrow as prominent as I could.

I dug out some eyebrow dye that I’d bought in lockdown but never used. Seeing my brows emerge a few shades darker was amazing.

It made me feel like an individual in a way that make-up never did.

In December 2020 I wrote on my various dating profiles that ‘my unibrow is not my only personality trait.’ It was a joke but was also a great way of screening out people.

I had no interest in dating someone who had a problem with what grew out of my face. However, apart from one guy who messaged me saying: ‘Ha ha, Frida Kahlo,’ I experienced no negativity on the apps.

I personally find hairy people really attractive. The person I’ve been dating for the past month also has a really luscious brow. The bigger, the better as far as I’m concerned.

I can’t see myself ever going back to removing the hair. If anyone is thinking about ditching the tweezers, I say: ‘Go for it!’”

Vanessa Fairfax-Woods, 40, is a photographer and lives in Shrewsbury. 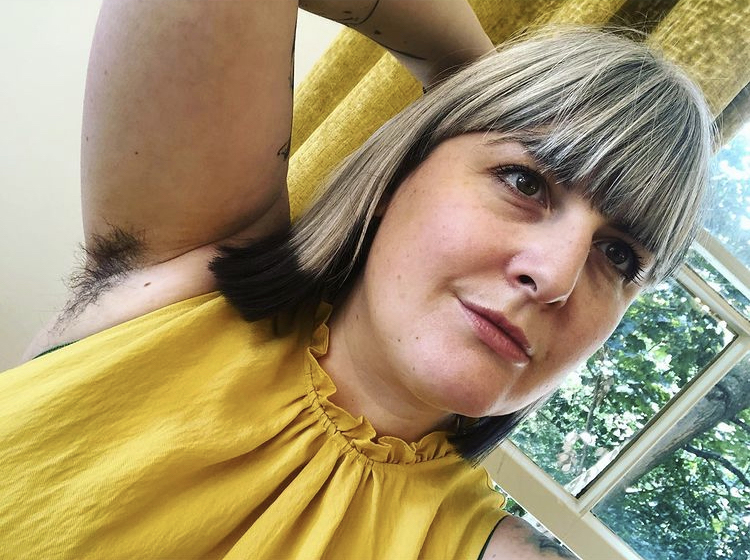 “I remember the self-consciousness hitting me as the talk among my schoolmates turned once again to who was shaving and who wasn’t.

I was all too aware of the dark hairs on my legs standing out against my pale skin.

It was 1991 and I was just 10, but that playground chat put me on a hair-removal treadmill that would last for over 25 years.

At first, my mum Jilly, now 64, stopped me. As an old-school feminist who let her own body hair grow, she was adamant that I wasn’t allowed to shave.

But by 11, I’d had enough. Borrowing her boyfriend’s razor, I tried to shave my legs, with no idea what I was doing.

Noticing that the razor was dulled a few weeks later, Mum asked me if I’d been shaving. I tried denying it before confessing all, making it clear that I was going to do it whether she liked it or not.

In some ways, shaving felt good, as it seemed grown-up to reach for the razor, and by 19, I was shaving my underarms and bikini line, too.

But it was like being on a hamster wheel. I always got an awful rash, and my hair grew back really quickly. I hated having even the tiniest bit of stubble, so I had to be on top of it all the time. It was relentless.

No guy ever told me directly that he found body hair disgusting, but I could see from the lads’ mags they read that a natural bikini line was an absolute no-no.

Then, in 2018, I started a degree in photography at Falmouth University. Exploring the work of female artists capturing other women – many of whom had natural body hair and were gorgeous – really changed how I viewed the narrow beauty ideals that women are held to.

I questioned why I was putting myself under all that pressure to be hairless but it was during the first lockdown in March 2020 that things really changed.

Like many women, I couldn’t be bothered to maintain my usual beauty regime when there was nowhere to go and no one to see. By that May, I realised that I hadn’t shaved for a while – and that the world hadn’t fallen in. 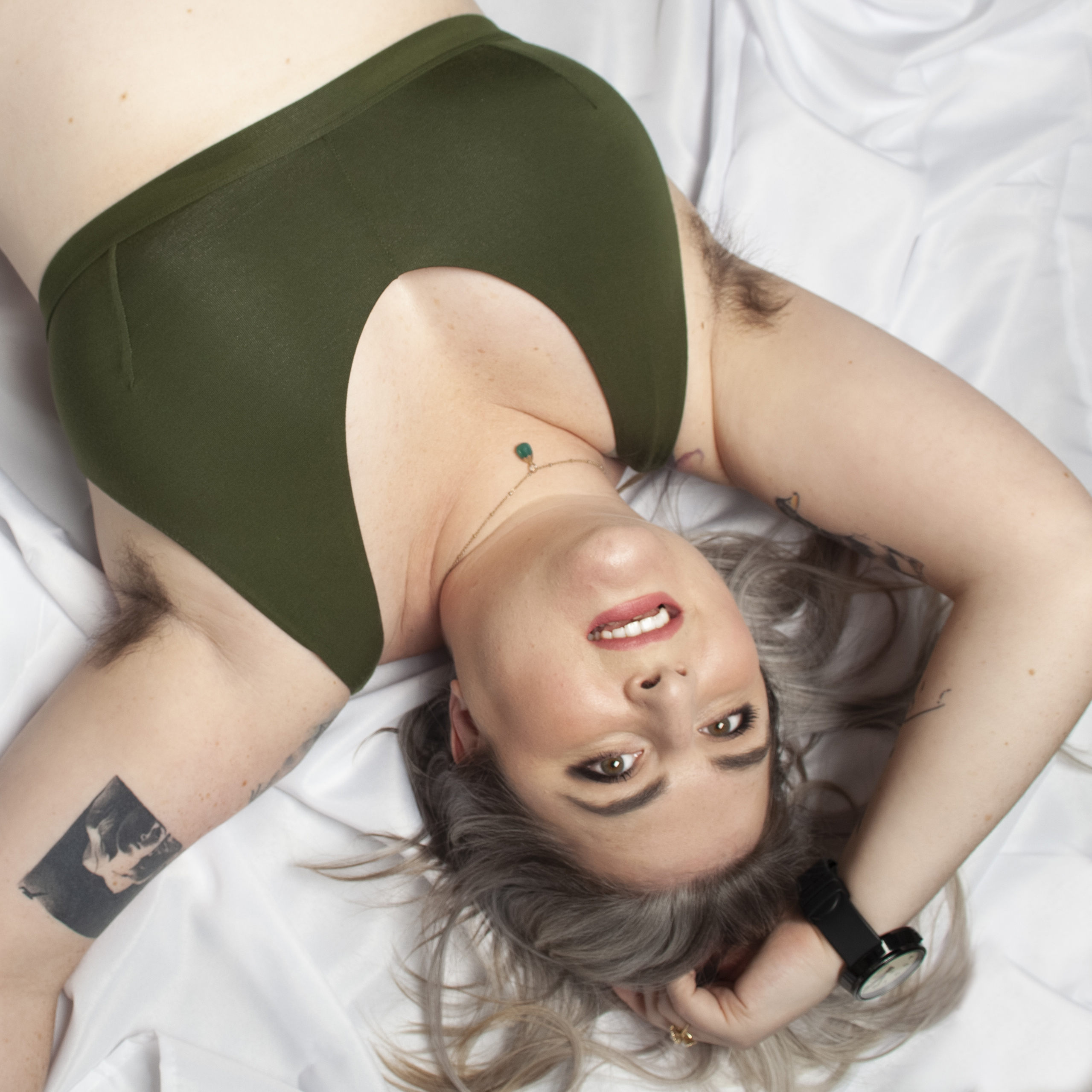 As my hair grew, I was surprised at how rebellious it felt. I was acting against all the messages saying I wasn’t allowed to be hairy, and it was exciting.

But it also felt scary. In the heat of June and July, I’d go out in a summer dress and notice strangers looking at my legs and underarms. There would be double takes and stares.

While my mum never mentioned it, I did have awkward moments with friends. They’d talk about their own insecurities about body hair, lamenting their hairy legs, before realising who they were talking to and quickly apologise.

That summer I felt really conflicted, wanting to be totally comfortable with my body hair but not being quite there yet.

So in August, I decided to post a picture of my hairy underarms and legs on Instagram, writing about my journey and sharing the mixed feelings I had.

The responses were great, with many women opening up about their own conflicted views on body hair.

It helped me realise that, while I loved my armpits, I didn’t like the hair on my legs. I gave myself a year of living with it before, in March this year, I decided to invest in a good epilator and used that on my legs.

I still love my fluffy armpits, and it’s a huge relief not to shave my bikini line, so I feel like I’ve found a happy balance that works for me.

Whether you choose to keep or remove your body hair, I’m glad there’s more representation of beauty out there. I guess I’m helping that conversation continue, one armpit at a time!”

Silicon Valley Came to Kansas Schools. That Started a Rebellion.