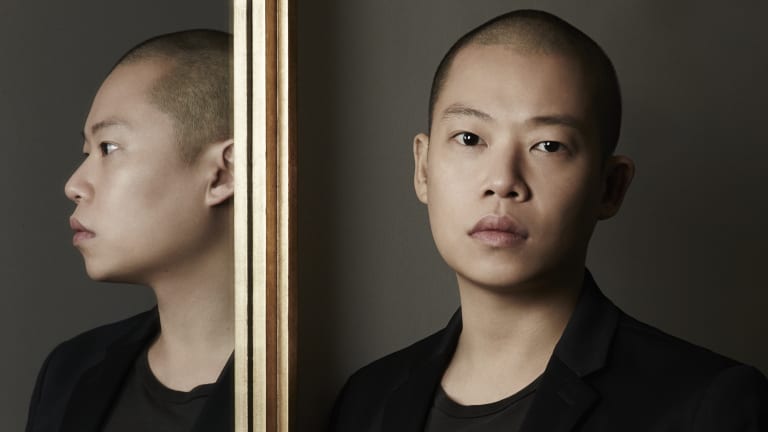 As a child, I remember my maternal grandmother [Chen Wen-Yin] making me Barbie doll costumes to keep me amused. I loved playing with dolls and wasn't a typical grandson. She was an amazing seamstress who taught me to sew and the one who inspired me to design.

I really missed her once we left Taiwan and migrated to Vancouver, Canada, with my mom and brother, Kevin. I was nine. I would go back and see my grandmother during the school holidays, but it wasn't quite the same. She died last year.

My mom, Chen Mei-Yun, felt Taiwan wasn't suitable for her sons. Kevin had started high school and was struggling with the pressure – the education system there is really full-on. I guess she could see I was never going to survive as I was creative and not academic. My dad, Wu Kun-Min, worked in agriculture and it wasn't so easy for him to move his business. He remained home and we relocated – he would come to see us.

I'm quite similar to my mom and still very close to her. She was a restaurateur. While she never worked in the fashion industry, she is a creative person with an eye for style and wore Yves Saint Laurent. She would take me shopping and I loved watching her get ready in the morning. I was not the typical boy who wanted to play with Transformers and she was the first to recognise that.

Seeing Mom learn to drive in the Canadian snow was something else as it never snows in Taiwan. Being away from her culture and family and finding herself in different circumstances was really hard on her, but she never gave up adapting.

I had a teacher, Muriel Kaufmann, who would come to our house three times a week to teach English. She became my mom's confidante and somebody I looked up to. Muriel taught me so much more than just language; she made me read books. Then she gave me fashion magazines and we started reading the articles in old issues of Vogue and Harper's Bazaar. She could see that fashion was something I was interested in and applied it to my learning.

I never had a girlfriend as a teenager, but I did date boys. I don't have memories of a first kiss – that's so long ago! But I always found it easy to be around girls.

My mom has never missed a fashion show of mine. She's kept me grounded. In my 20s, she'd always remind me to calm down, remain humble and never stop being a student. That's the best advice – because when you're young you aren't so busy behaving that way. She also made sure I never let the hype go to my head.

Mom is my biggest critic, too. She never shies away from telling me she doesn't like the way a certain dress fits a model. She once gave me back a dress I'd gifted her because there were some threads hanging. She told me I needed to check my quality. I was a bit annoyed but she was right.

I'd never have believed that the First Lady Michelle Obama would wear my clothes when I attended Parsons School of Design in New York in the early 2000s.

That Michelle liked my clothes came as a complete surprise to me. When we first met, in 2008, she came over to me and said to give her a big hug. She gave me the most memorable moment of my career by wearing my gowns to all those important presidential events. She is exactly the person she comes across as – down to earth and authentic.

My celebrity crushes were on American models such as Amber Valletta and Stephanie Seymour. I remember seeing them in fashion magazines and thinking, "Wow!" I got Stephanie to do a campaign for me in 2013. She is amazing, someone I have admired for many years and a natural beauty.

My female cousin in Taiwan inspired my new fragrance. We would pick jasmine from our neighbour's wall as kids and when it came to working on this scent, I wanted to conjure that memory. I always wanted a big sister and this perfume reminds me of that cherished time together.

I met my husband, Gustavo Rangel, 15 years ago at a party held at a mutual friend's house in New York. When our relationship got serious, we decided he could also help with the finances of my company. His role [as chief financial officer] happened organically and we have a personal and professional relationship that works.

I never thought about getting married but it was important to Gustavo to make that commitment. It was a great excuse to have a party in Mexico and celebrate with friends.

Barbara Windsor is ‘doing well’ in her battle with Alzheimer's disease and is going back to work this week, reveals EastEnders’ Pam St Clement

iPhone 12 event to be confirmed this week, insiders claim

What Is Cassie Doing After ‘The Bachelor’? Here’s What We Know About Her Life