The torn parent took to Mumsnet after the father of her child said the youngster should wait until she was “much older” before getting it done. 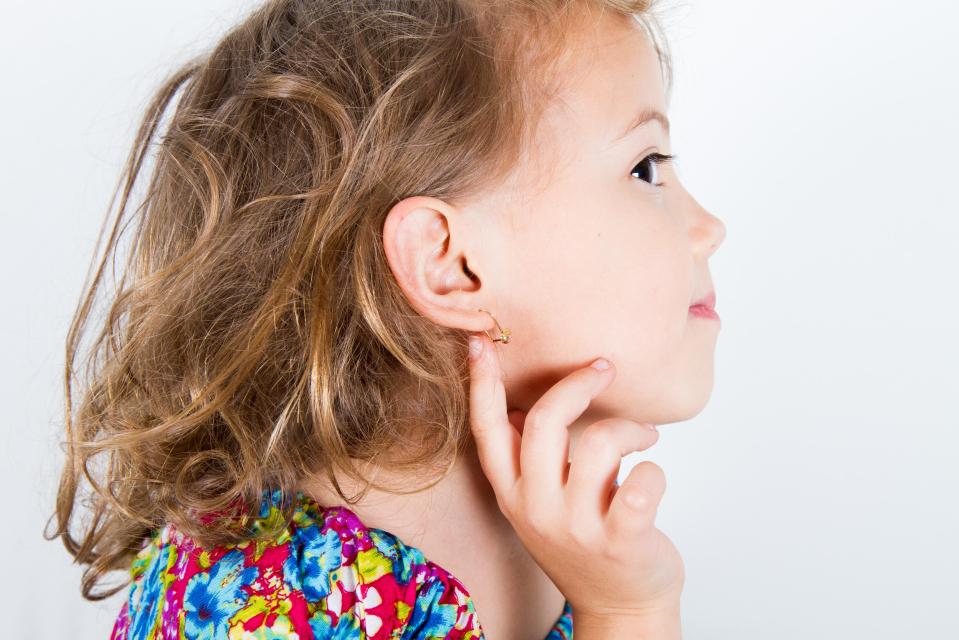 The anonymous mum-of-four said on the forum: “My DD4 (darling daughter) wants her ears pierced, because DD3 has them done and so do I.

“DD4 is 4 years old and pretty articulate for her age so knows it will hurt, she has clip ons but wants real ones.

“Her dad is saying no not until she is much older, he sees her once a fortnight and school holidays but is involved.”

She argued that her ex-partner was fine with her other three kids getting their ears pierced at the same age, but she can’t understand why he has a problem when it comes to his own daughter’s age. 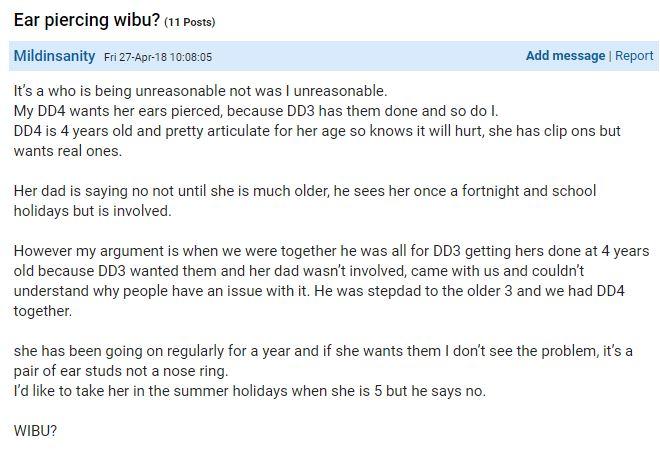 Other mums were split over the age debate, with some slamming her for even entertaining the idea.

One said: “I think doing that to such small children is horrible, so I agree with him that you shouldn't. But then he's being pretty hypocritical isn't he.”

Meanwhile one person added: “Personally I think pierced ears on a child that young looks common.”

But some said it was disrespectful to make a decision like that without the dad’s permission.

And another Mumsnet user wrote: “I won’t get them done without his agreement but I think it’s unfair he was all ok with DD3 getting them done at 4 years old but won’t allow DD4 at 5 years old because it’s his own flesh and blood.” 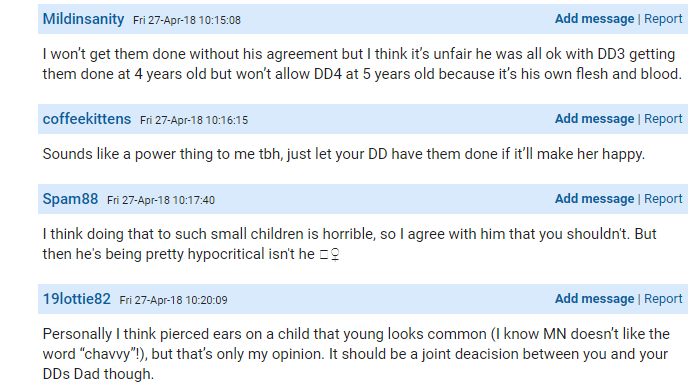 However, others on the forum couldn’t see the issue and said she should get her daughter’s ears pierced if that’s what the girl wants.

One thread commenter said: “Sounds like a power thing to me tbh, just let your DD have them done if it’ll make her happy.”

Some piercing salons impose their own age restrictions for body piercings, but there is currently no legal age restriction for any kind of piercing in England and Wales.

This is different in Scotland, where people under 16 are required to have a parent’s permission before having ears and other body parts pierced.

So whose side are you on? Is four too young for ear piercing or is it just harmless?

Previously a mum was accused of ‘child abuse’ after video of baby having her ears pierced sparks outrage on Facebook.

And a mum previously alleged that her 18-year-old daughter was turned away from EIGHT ear piercing studios because she has Down’s Syndrome.