In the revolt against fast fashion, younger people are adopting the errand of their grandparents and making a trip to their local tailor.

Molly Barrington, 29, has been working as a tailor in Melbourne since 2017, recently moving her shop from the CBD to St Kilda. She thinks people in her demographic are "definitely becoming more aware" of tailors, probably wanting to be less wasteful with their wardrobes. 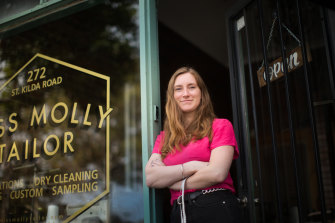 "When they discover it, they keep going back," she says of her millennial customers. "If you are someone who buys things online or at an op shop and they aren't quite what you need, it is financially viable."

The bulk of her work is simple repairs and resizing but Barrington, who studied fashion design in her native New Zealand, also occasionally makes items from scratch. Although she originally envisaged starting her own label, she finds "having someone who really wants something, as opposed to designing for off-the-rack" to be "really rewarding".

On Sydney's King Street, tailor Mario Conte has been in business since 1965. The 85-year-old says although most of his customers are older, he has some younger people coming to him with clothes they've purchased from the area's op shops.

"They buy it for $5 or $10 and then they take it to me," he says. His business has shifted over the decades from largely making custom clothes to focusing instead on alterations.

"Before it was the dry-cleaner who was dealing with that, but now not many people know how to sew. People come here just for me to put a button on."

For fashion designer turned recycled fashion blogger Ana Fernanda Covarrubias, 35, altering and repairing clothes is a must-have skill for those wanting to reduce the carbon footprint of their wardrobe.

The self-described "eco-fashion stylist" runs workshops on how to make smart purchases from charity shops in Geelong, and says although tailors are becoming more popular, more people want to learn how to make changes to second-hand clothes themselves.

"I do my own reparations because I know how to sew," she says. "And I also want to help people know how to do their own fixes, so they are more open to buying something that doesn't necessarily fit properly."

Covarrubias, who started her blog, The Second Runway, after moving from Mexico to Australia four years ago, recommends pants and skirts as the easiest second-hand items to alter ("either shortened or lengthened; just be sure to check the length of the hem before you buy"), while cropping a shirt or its sleeves can also be a quick way to transform a purchase.

"I wouldn't say it's a 'trend', buying second-hand," she says. "Climate change is happening now and I guess younger generations are more aware of the situation. It's something we need to do and this is a fun way to do it."

Channel Kendall Jenner's Bright Workout Look With This Under-$30 Set