The model of the moment considers fashion’s future. 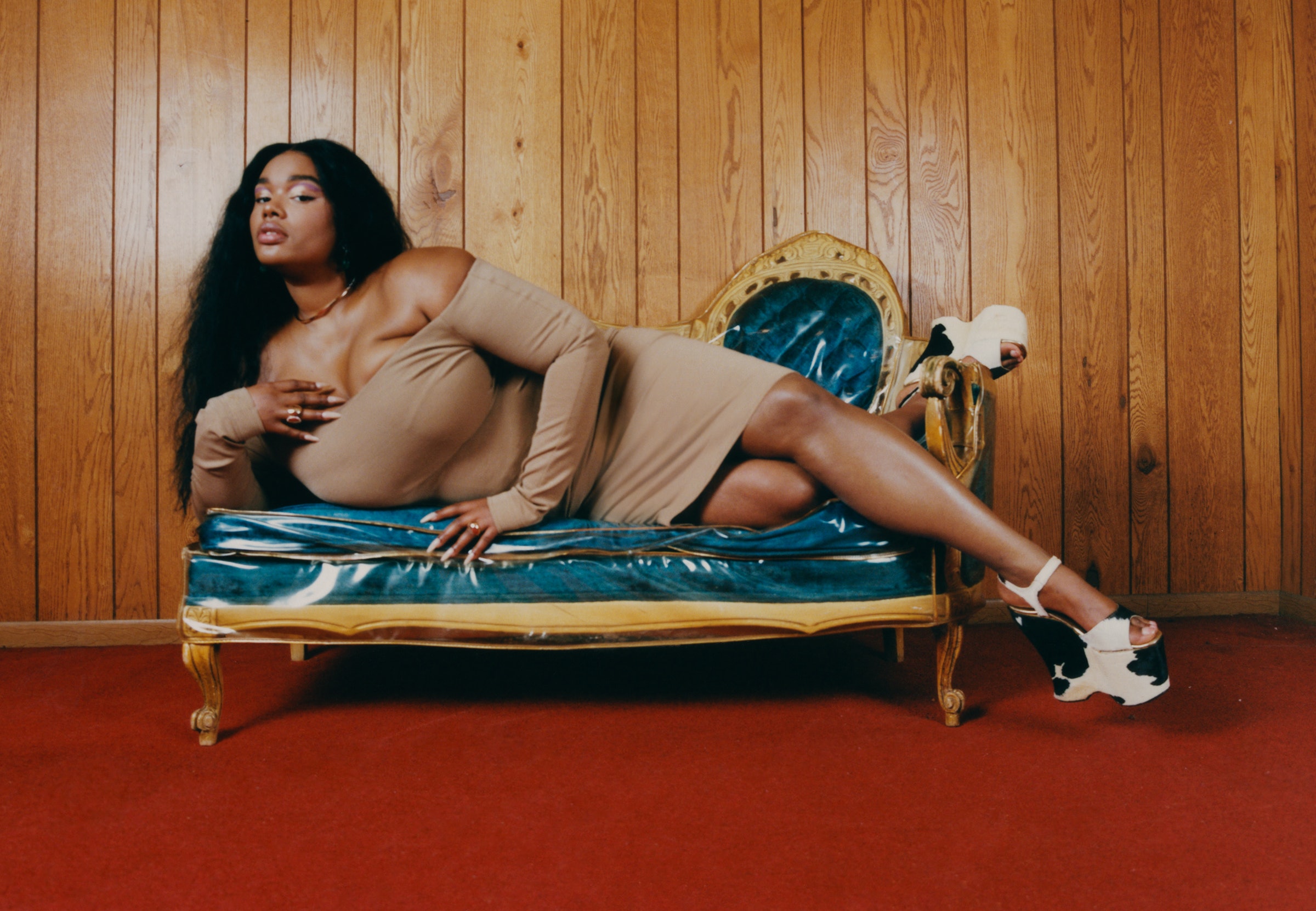 The word “trailblazer” is one that many have used to describe the breakout supermodel Precious Lee, and considering the milestones she’s achieved since she appeared at Milan Fashion Week in September 2020, it’s easy to see why. Just this past year, Lee became one of the first curve models to walk the Versace runway, was the only curve model in the label’s spring 2021 campaign, and graced the covers of Vogue, British Vogue, and Harper’s Bazaar. At the most recent New York Fashion Week—the first full-fledged, in-person extravaganza since the start of the Covid-19 pandemic—she appeared in seven shows. That was all before the model arrived at the Met Gala in a sparkling silver tailored Area gown that borrowed motifs from the braided ponytails and protective hairstyles she saw and wore growing up, in her father’s hair salons in her hometown of Atlanta. Inspired by the very few curve models who came before her (and the even fewer Black curve models), Lee has moved the needle on what people think a model is “supposed” to look like. It is an important triumph that she clearly relishes.

Six years before you walked in your first fashion show, at Christian Siriano in February 2017, you were a student at Clark Atlanta University, on track to becoming an attorney. Did you develop an interest in fashion while you were there?

I’ve always loved fashion and photography, and I was in Clark’s homecoming fashion show. I loved being around that energy of kids who love fashion—putting on their own production, making the designs. Even then, it was progressive to have a curve girl in the show. Then I ended up going to an open call for an agency with my friend, and I was offered a contract. At the time, I was more concerned about getting back to campus for my next class.

What made you decide that modeling was the space in the fashion industry that you wanted to occupy?

The reaction of people seeing me in certain spaces, like at that fashion show—I started to feel an inspirational energy around who I was. In high school, I was the homecoming queen. I’ve always been a leader, but modeling felt different, because it wasn’t just about scholastics; it was more about making people feel better by seeing me already feeling good. I really didn’t tap into how massive that dynamic could be until I started to model and saw the reaction from people who would see me in a store window. I did a lot of commercial work when I was in college, and women would come up to me and say, “Oh my gosh, I bought this dress,” or “I bought this workout outfit.” African-American women were acknowledging me.

Which models did you look up to when you were younger?

I love Toccara Jones. She shot with Steven Meisel. She had big boobs, and I have big boobs, and she was Brown—there were so many different things that started to attach me to the advocacy portion of being a model. Things are obviously changing, but the initial idea someone has when they think of a model is someone really tall and thin. Seeing Crystal Renn, seeing Toccara, seeing these curve women really break through—it just made me challenge myself to see how far I could take it.

What does originality mean to you?

Being true to your own initiatives, your inner counsel. Using and trusting your power—living that, speaking that, and embracing that. Not having to think about how something may be perceived more than how true it is to you. When you’re allowing yourself to explore the things that you want, everything you do becomes original.

Whom do you consider to be an original?

When I think of Black women, “originality” is the word. It is something that is in our DNA. The contributions to society that Black women have made are invaluable. I have a shirt that says “Protect Black Women,” and it’s a whole movement now. And I’m really grateful to see that people are recognizing that, and understanding the power of Black women—our resilience, our versatility, our creativity. I’m incredibly grateful to be a Black woman.

My parents. Anytime we go anywhere, you’re guaranteed to hear people come up to them to tell them how amazing they look. My dad walks around, and people are like, “Whoa! Love that hat, those boots, that belt.” With my mom, it’s, “Oh my gosh, you’re so beautiful. Where did you get that?” When I was a kid, I cried when my mom wore animal print or red lipstick. I cried when my dad would wear his Versace button-down open, with his gold chains and his chest hair. I would climb up and try to button his shirt, like, No, I hate it! Now, you cannot find me without cleavage, not in a red lip, animal print, and Versace. It’s hilarious.

Do they give you style advice?

When I get dressed for a big event, I’ll call. “Dad, what do you think of this?” Or I’ll call my mom. We’re so collaborative. I trust their opinions, because they never want to look like anyone else in the world, and I don’t, either.

What was your first major fashion splurge?

When I was in college, I bought this Balenciaga jacket. That was when I started to buy seasonally. I called them “stunt pieces.” That is how I started to shop, and that is my method to this day. That Balenciaga coat was like, I know it’s really expensive. I don’t care. I need it. This is an investment.

What’s the most prized possession in your closet?

I have a leather jacket that belonged to my sister, Charisma, who died. It’s an oversize purple, black, and white leather jacket, and it has a giant eight ball on the back.

When you were a teenager, what was your style like?

I love coordinating colors. I love pink. I was really into streetwear in high school. If it wasn’t Rocawear or Baby Phat, Apple Bottoms, Enyce, all of that, it had to be a set with the name on it. I started to dabble in makeup. I would sometimes match my eyelids with my shirt, and I just had fun. I would go through phases, but it was always head-to-toe put together. I had a purse; I accessorized. I actually dressed way more intensely than I do now. That was my Atlanta style.

What would you consider to be your most original quality?

I tell the truth.

What’s the one question you’re tired of answering?

“How did you become so confident?” To me, that question is like, “Wait a minute, how are you so happy and going for it? You’re not worried about people judging you? You’re really going to move to New York?” It feels like you’re saying it was so impossible to think of it happening. I think that question is loaded. Another one is, “How do you feel about being called ‘plus’?” I don’t really like answering that, but I continue to answer it because I know we’re in a pioneering situation; it’s new.

Think about when you’re at your happiest: Where are you, and what are you doing in that scenario?

I’m laughing; other people are laughing; it’s in a beautiful setting. That’s one of our purest moments—when we’re in a full, long belly laugh. And I love music; I’m usually singing. I love the things that feel free and releasing and joyous. Also, just living my manifestations: that moment when you think, Wow, I remember when I was praying for this. Taking that time to savor it like that and to smell those flowers, to look back at how far you’ve come. I love when it hits me, and I’m just like, Thank god.

What do you think the future of fashion looks like?

We are going to see more pivotal changes in the industry, because people have a sense of fire now. The fashion industry is going to have to continue to be accountable, and interactive with the consumer. People are standing up for themselves and saying no to what is abusive, suppressive, or oppressive, and things that are not aligned with who we are. Because of that, I don’t think that falling back into the same patterns is possible. It’s a whole new world, and the ones who are going to thrive are those who are going to embrace that authentically, not performatively.

Kate Middleton and Prince William will scrap tradition of dividing Christmas between their two families, US reports claim