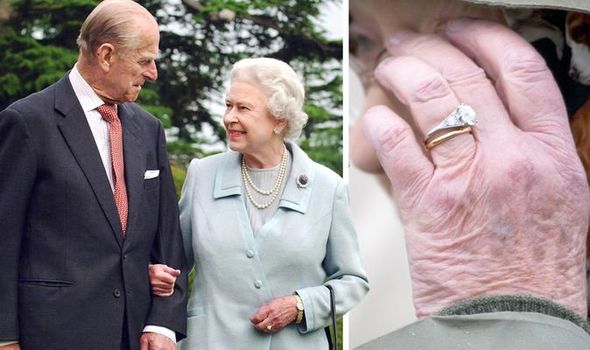 Last year, Queen Elizabeth II and the Duke of Edinburgh marked their 73rd wedding anniversary by releasing a new photograph showing them opening a card from the Duke and Duchess of Cambridge’s children. Today would’ve been their 74th wedding anniversary. Express.co.uk spoke to Nilesh Rakholia, Director at ABELINI about the ring the Monarch was given by Prince Philip and the possible hidden meaning behind the design.

The Queen met Prince Philip when they both attended the wedding of Philip’s cousin, Princess Marina of Greece, to The Duke of Kent.

This was back in 1934, when the Queen was a teenager and Prince Philip was an 18-year-old Royal Navy Officer.

The couple then met again at Dartmouth Royal Navy College in 1939 where Prince Philip apparently tried to impress Her Royal Highness on the tennis court.

Soon after, the couple starting corresponding with one another and their engagement was then announced on July 9, 1947, after Philip asked King George VI for permission to marry his daughter.

“The ring houses a three-carat round-cut diamond in the centre, surrounded by 10 smaller diamonds, all set on a platinum band.

“Round-cut diamonds are the most popular cut as their countless facets allow for optimum light that gives astonishing sparkle,” she added.

“A round-cut diamond is thought to represent someone who is elegant and traditional, which certainly runs true for her Royal Highness.

“The rounded shape of the diamond is also thought to represent eternal love, proven by The Queen and Prince Philip’s enduring love for one another over the decades.

“When deciding on a ring for his future bride, Prince Philip turned to his mother, Princess Alice of Battenburg for help.

“She kindly gifted him a tiara that was given to her by Tsar Nicolas that was disassembled and beautifully crafted into this awe-inspiring ring,” Nilesh commented.

The Queen and Prince Philip’s wedding took place four months after the engagement on November, 20 at Westminster Abbey.

The ceremony was watched by 200million people worldwide.

As for the wedding bands, the rings were made from a nugget of Welsh gold which came from the Clogau St David’s mine, near Dolgellau.

In terms of what Queen Elizabeth’s wedding dress was like, it was designed by Sir Norman Harnell after he submitted several designs.

The winning design was approved mid-August, which was less than three months before the wedding.

The dress has a simple cut with fitted bodice, heart-shaped neckline with a low v-pointed waist and a floor-length panelled skirt.

Due to rationing measures in place following World War II, the Monarch had to use clothing ration coupons to pay for her dress.

Hundreds of people from across the UK sent their coupons to the Royal Family help with the dress, although they had to be returned as it would be illegal to use them.

Rosario Dawson officially comes out as part of the LGBTQ community

EastEnders lines up a shocking shooting storyline – could someone be killed off?