The notorious 2006 World Cup, where England’s WAGs went wild (and the team crashed out on penalties – ‘twas ever thus), seems a long way away today. 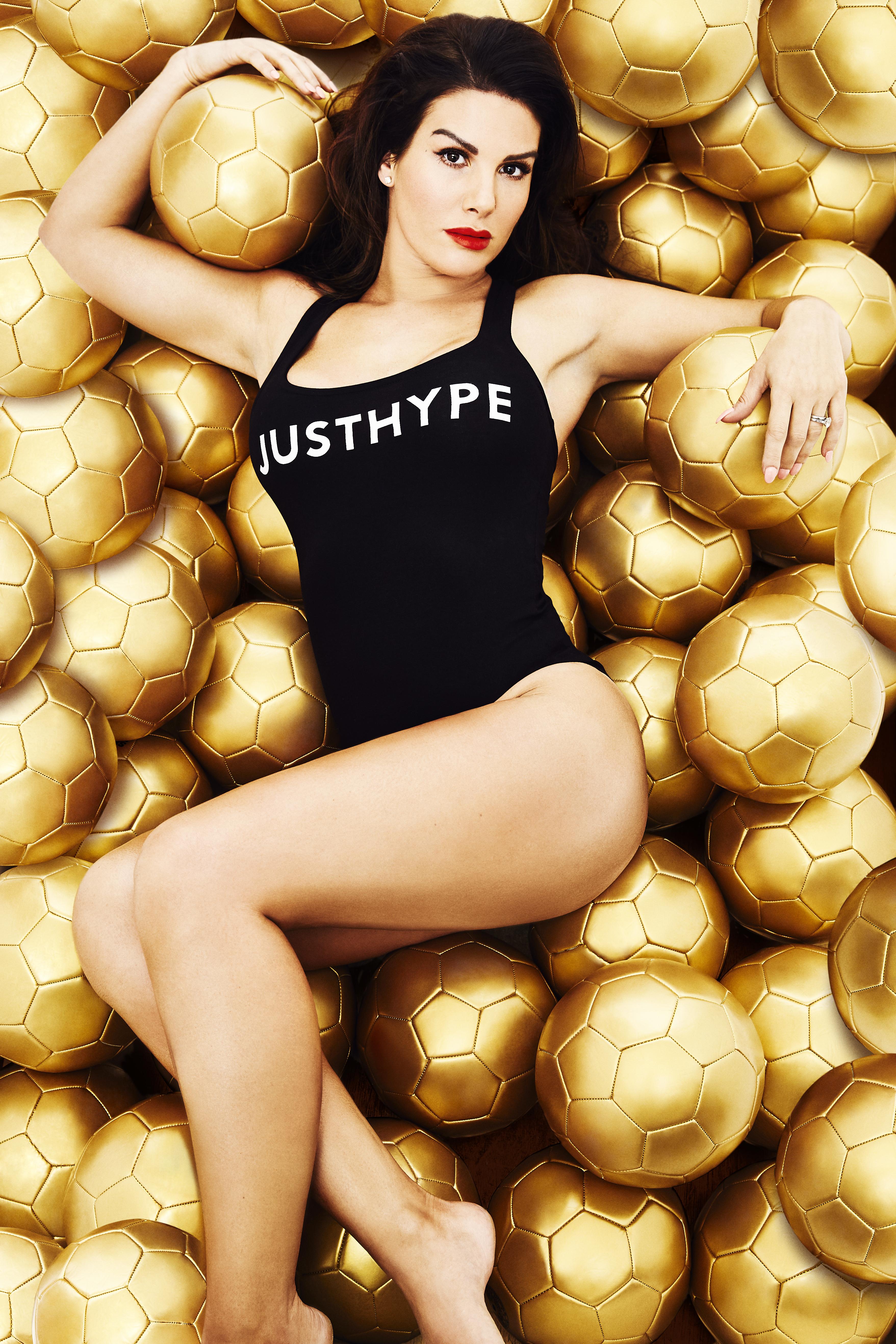 Back then, the boozy antics of Cheryl, Posh, Elen, Coleen, – and Alex (god love ‘em) dominated the summer headlines as they partied and shopped their way around the normally sedate German town of Baden-Baden and provided far more entertainment than what was actually happening on the pitch.

Twelve years on, WAG mania has subsided and Rebekah Vardy, wife of Leicester and England striker Jamie, says there’s no chance she’ll be dancing on any tables in Russia when the World Cup kicks off later this month.

“The wives and girlfriends have a much lower profile now and that is how it should be. Our job is to be supportive,” she says.

“I would be mortified if I was pictured leaving a bar absolutely p**sed knowing that my husband was going to play one of the biggest games of his life the next day. 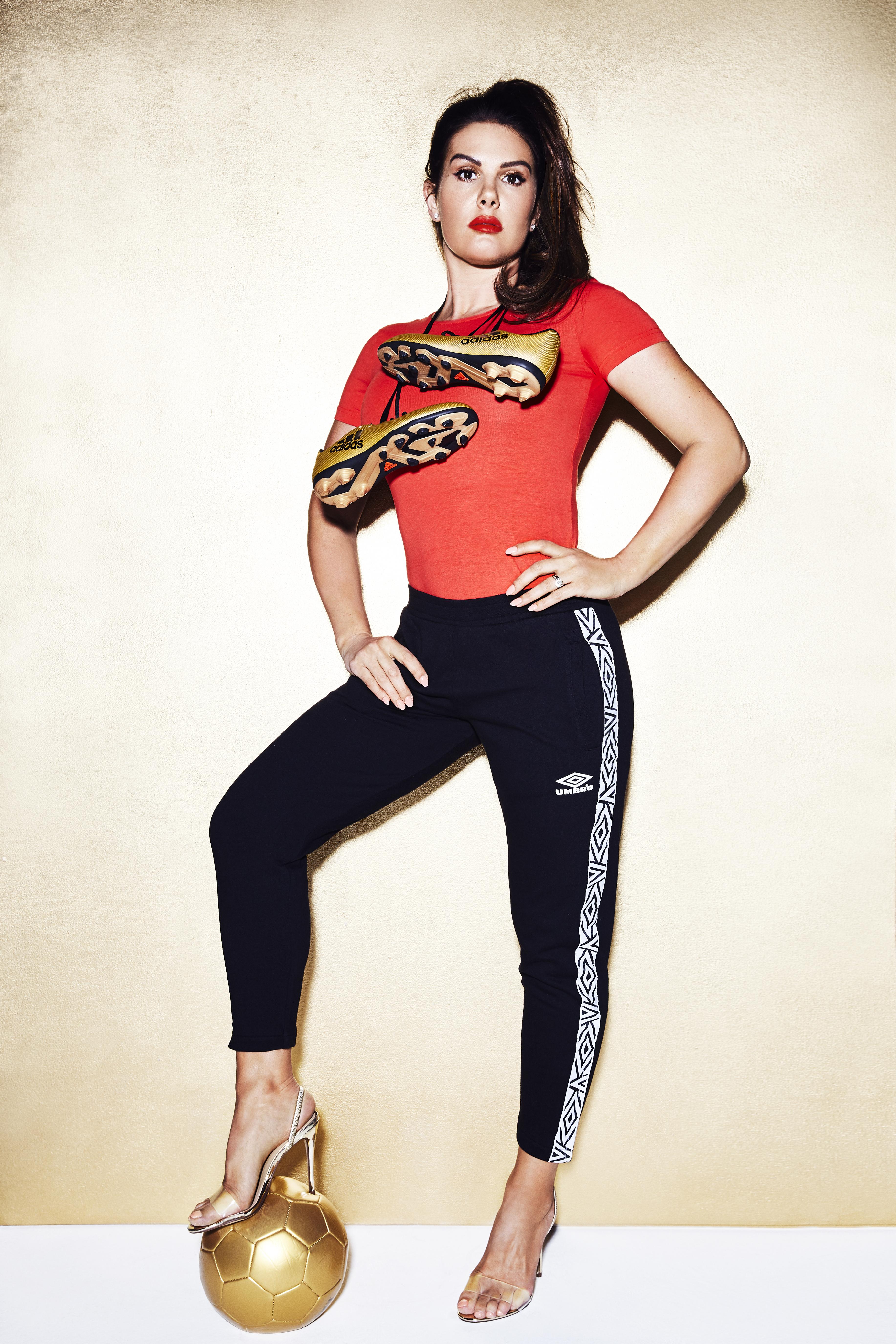 “If I was splashed across the front pages, I’d get a bit of a b*****king for that. I know the line and I know not to cross it. There will be photographers everywhere and  it’s not the right time or place to get drunk.”

Becky, 36, will be heading to Russia with her four children and her dad Carlos ahead of England’s first game against Tunisia on June 18. She’s understandably apprehensive given the ongoing political tensions and rumours of organised violence by Russian ultras, which have prompted the government to warn travelling England fans to be wary of risks.

But Becky has taken the necessary steps to ensure the safety of her family.

“With all the political stuff going on at the minute, it’s something we’ve really considered and weighed up. We took advice from a company that has experience of working in Russia and they helped put my mind at ease. 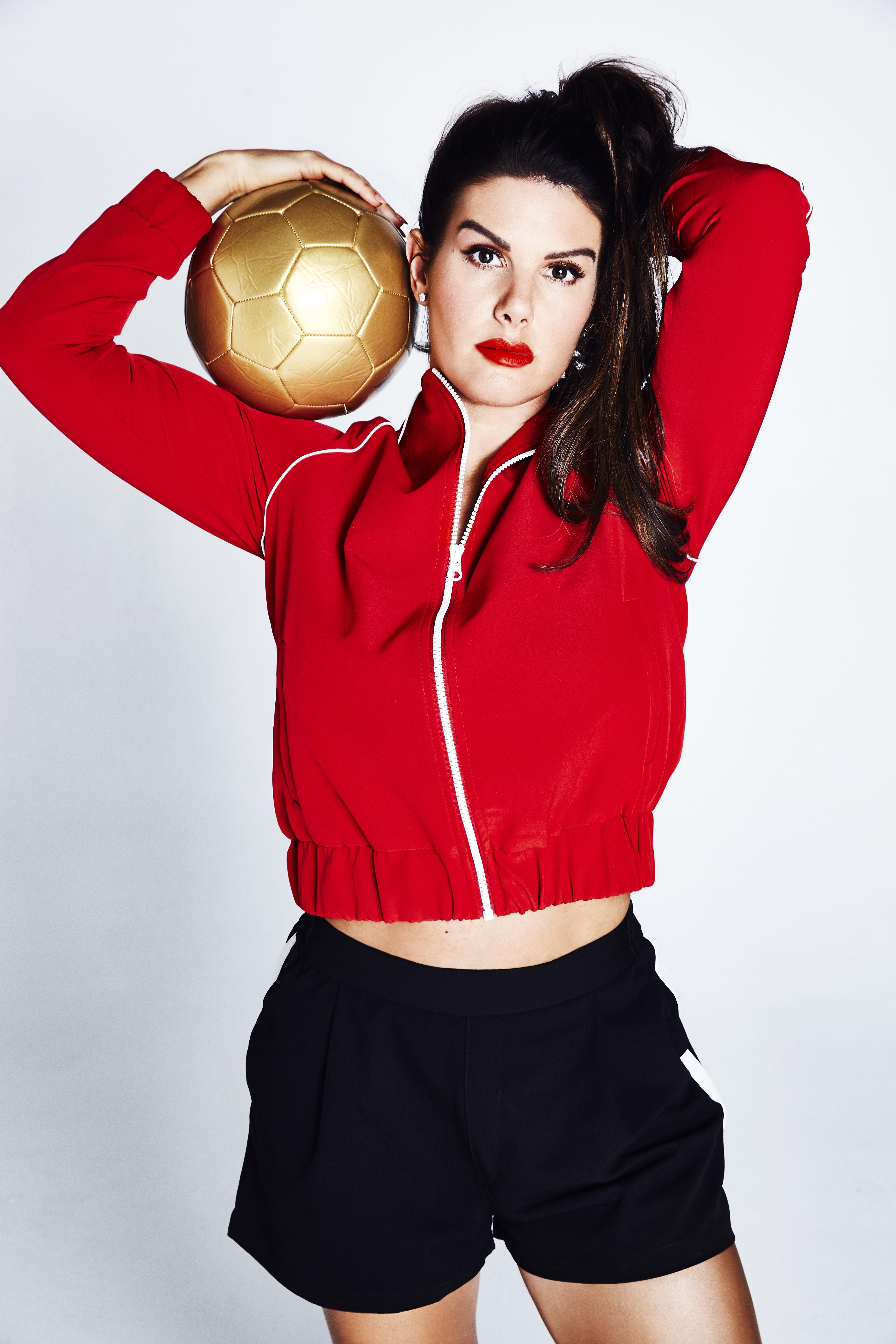 “As a family we definitely will have security, but nothing is going to stop me from supporting my husband doing his job. And I just think it’s something important for the kids to be able to experience.

“Going to the World Cup is a massive, massive deal – memories they will treasure forever and tell their own children about.

“It’s a huge piece of history. You never know, the team might replicate 1966.” 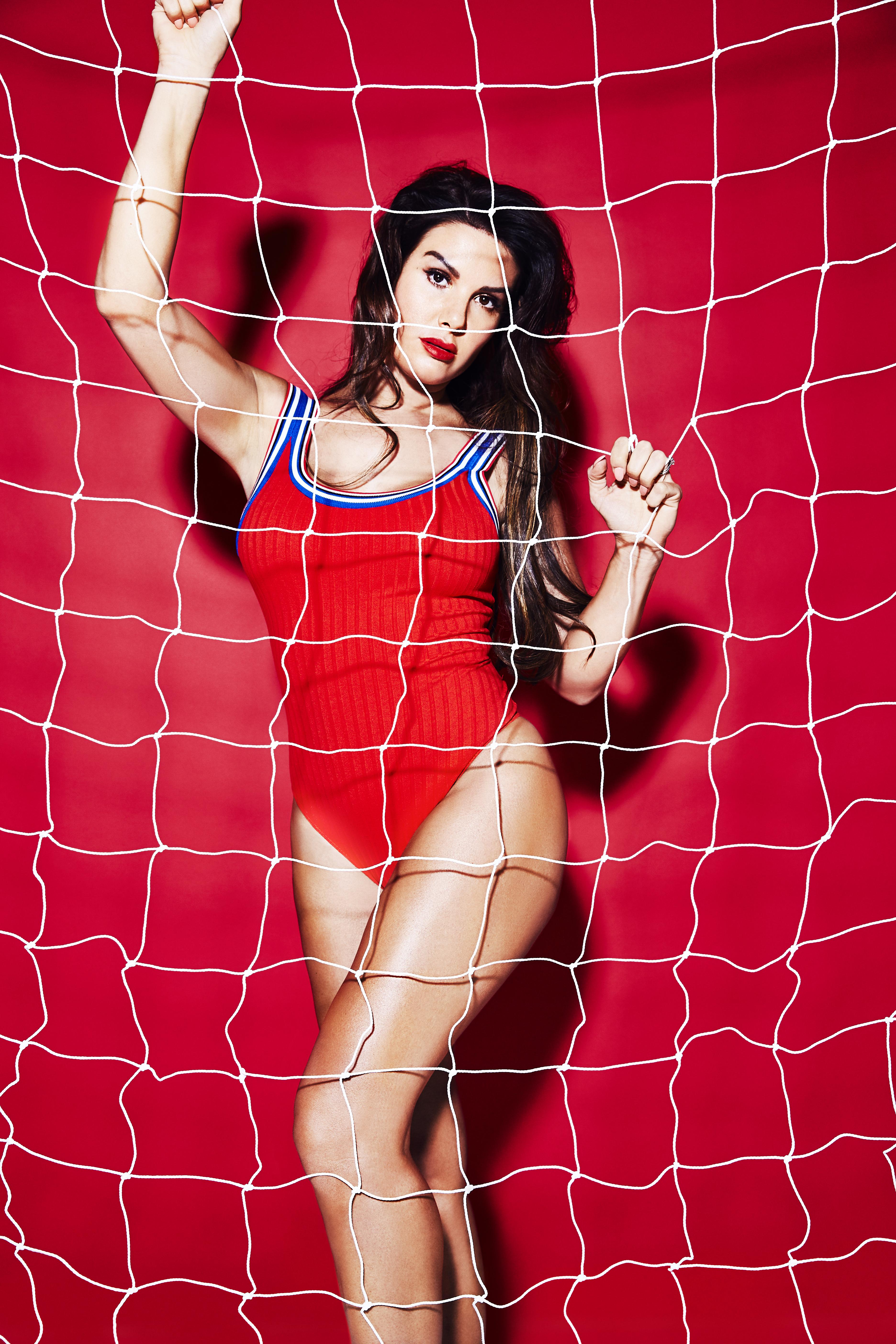 “Well, you’ve got to have hope,” she smiles.

Since Jamie, 31, shot to fame as the factory worker turned Leicester City super striker who rose from the amateur leagues to help the club claim that shock Premiership title in 2016, Becky has by osmosis become a media star in her own right.

She is forthright, opinionated, funny and sharp, swears like a navvy and is definitely not the sort of girl to sit quietly in the background, content with a mere walk-on part in the Jamie Vardy show.

The pictures she posed for last year – wearing a bra and knickers just three months after giving birth to youngest child Finley and showing the healthy reality of a post-pregnancy body, mum tum and all – were a perfect example of her zero-f**ks attitude and refusal to conform to the footballer’s wife stereotype. 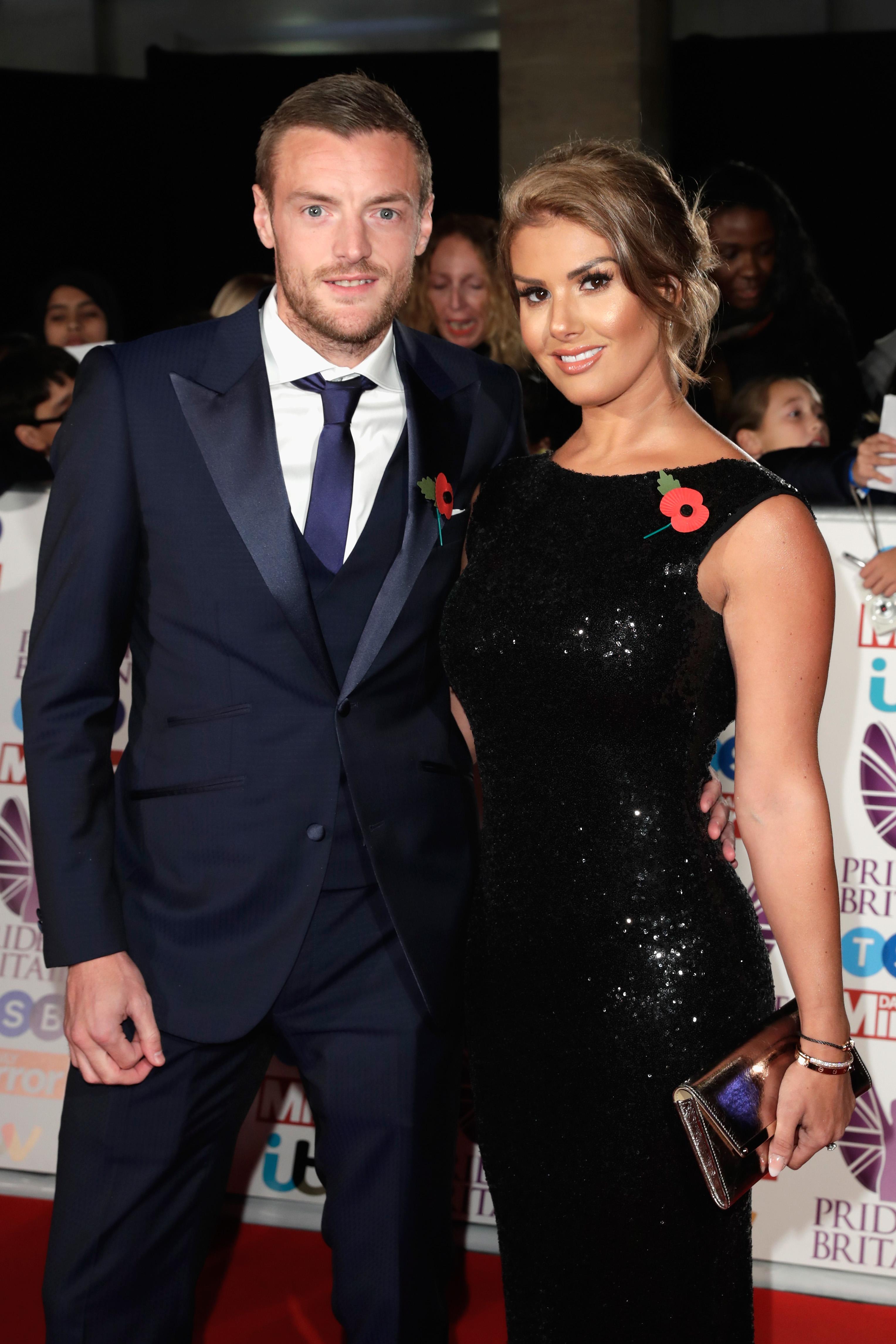 But all of that, along with her complicated family history, has meant that Becky has often been cast as the villain – a feisty woman with ideas above her station (and that will never do!). As a result she’s fallen victim to some pretty horrifying trolling on social media.

“People don’t like women to have an opinion and to be strong,” she says.

“They want women to sit back and take abuse. Well f**k that! No way, I’m not one of those people. I shouldn’t engage with trolls, but sometimes I think it’s important to pick up on it and highlight it  so other women know that they’re not the only ones dealing with that. Maybe together we can make the world a better place.

“I never retaliate with abuse or aggression.” 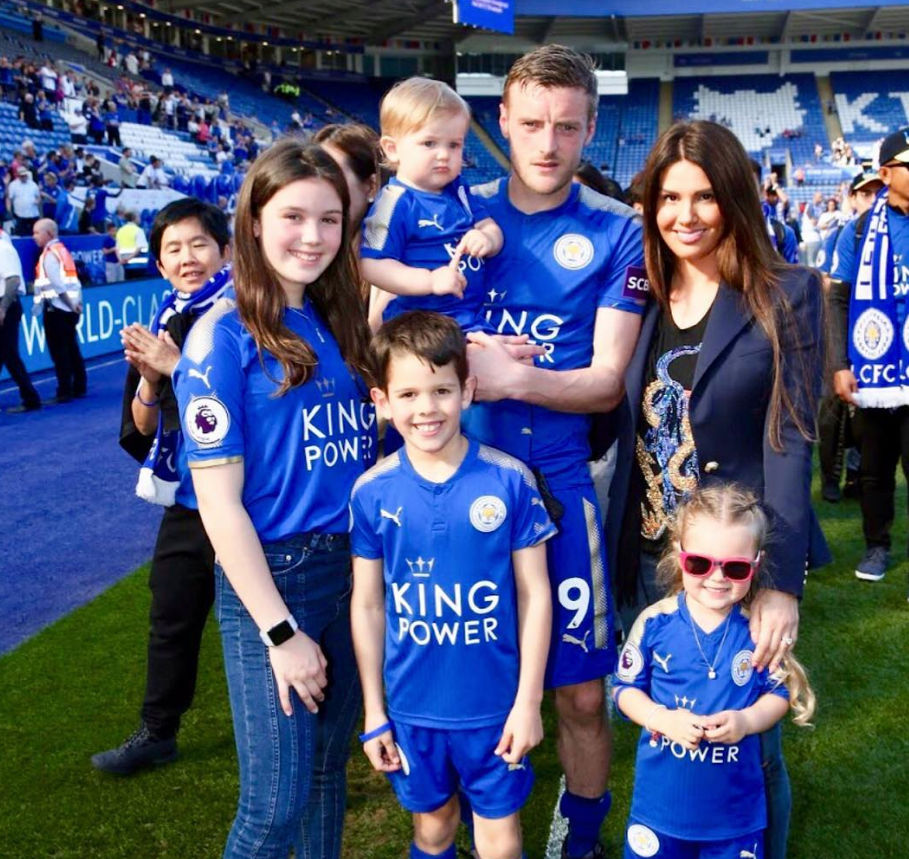 She pauses a beat before conceding: “OK, I may call someone a t**t or a w****r or a b***end, but I don’t class that as… Look, people don’t get my sense of humour. I’m quite dry, and that’s why people are sometimes unsure about it.

“I’m an opinionated woman. I am not a nasty person, but if I have something to say, I will say it.”

Becky already had two children – Megan and Taylor, now 13 and eight – from two previous relationships when she met Jamie in 2014 at the nightclub where she worked in promotions.

They now have Sofia, three, and 17-month-old Finley together, as well as Jamie’s seven-year-old daughter by his ex, making for a busy, chaotic and, ultimately, says Rebecca, very happy household. 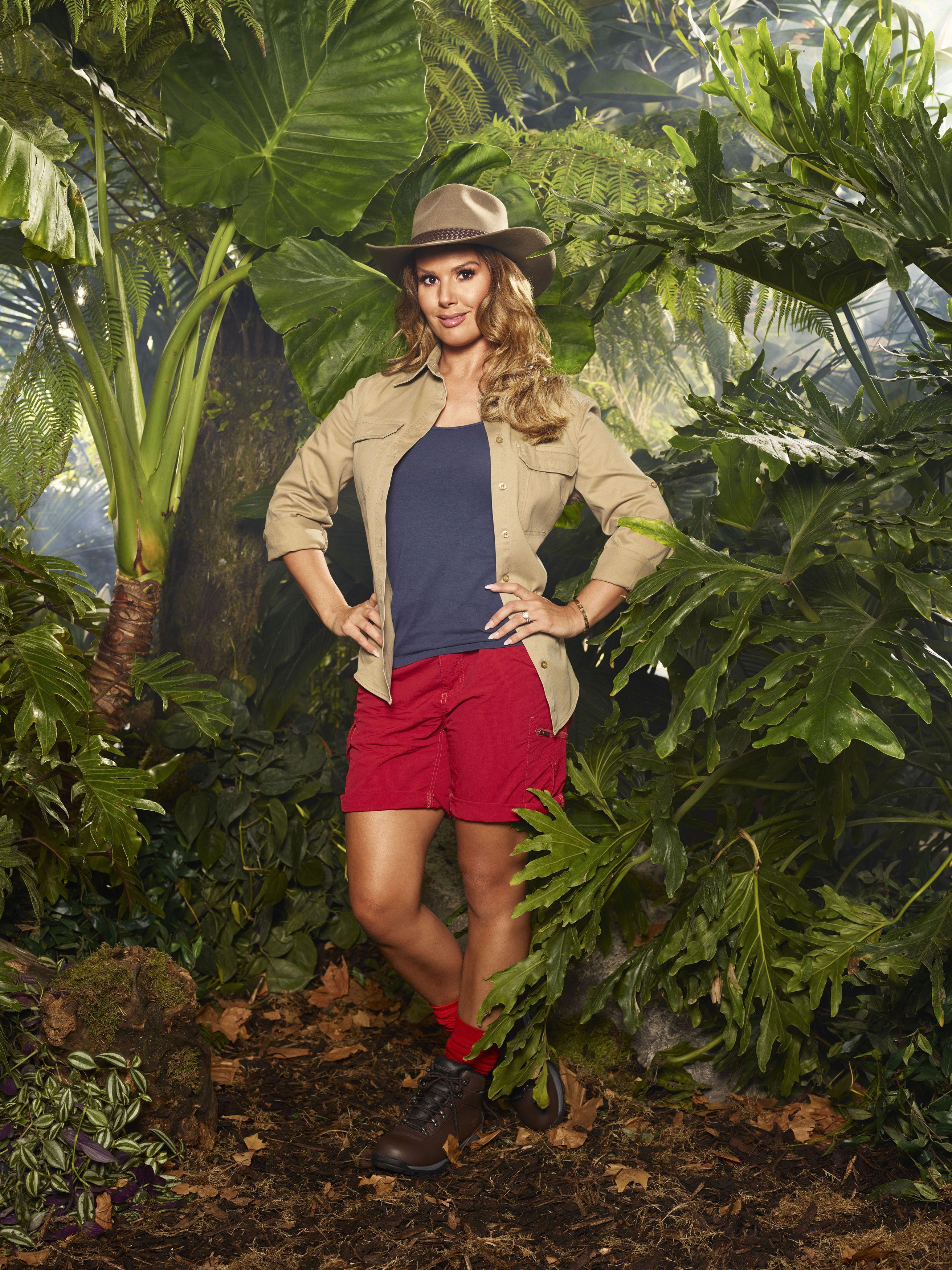 Sadly, the same can’t be said for the extended family. In the run-up to their wedding in 2016, it emerged that there were deep divisions on both sides – Jamie’s parents and grandparents, who reportedly disapproved of her, and Becky’s mother and stepfather all stayed away from the big day.

Speaking for the first time about the bitter feuds, Becky says she’s past caring.

“It is what it is,” she says with a shrug. “I don’t care any more. I don’t speak to certain people any more and neither does Jamie. We’re a strong family and I guess it just makes you appreciate what you have got and what you don’t want to become.”

Is there any hope of a reconciliation? 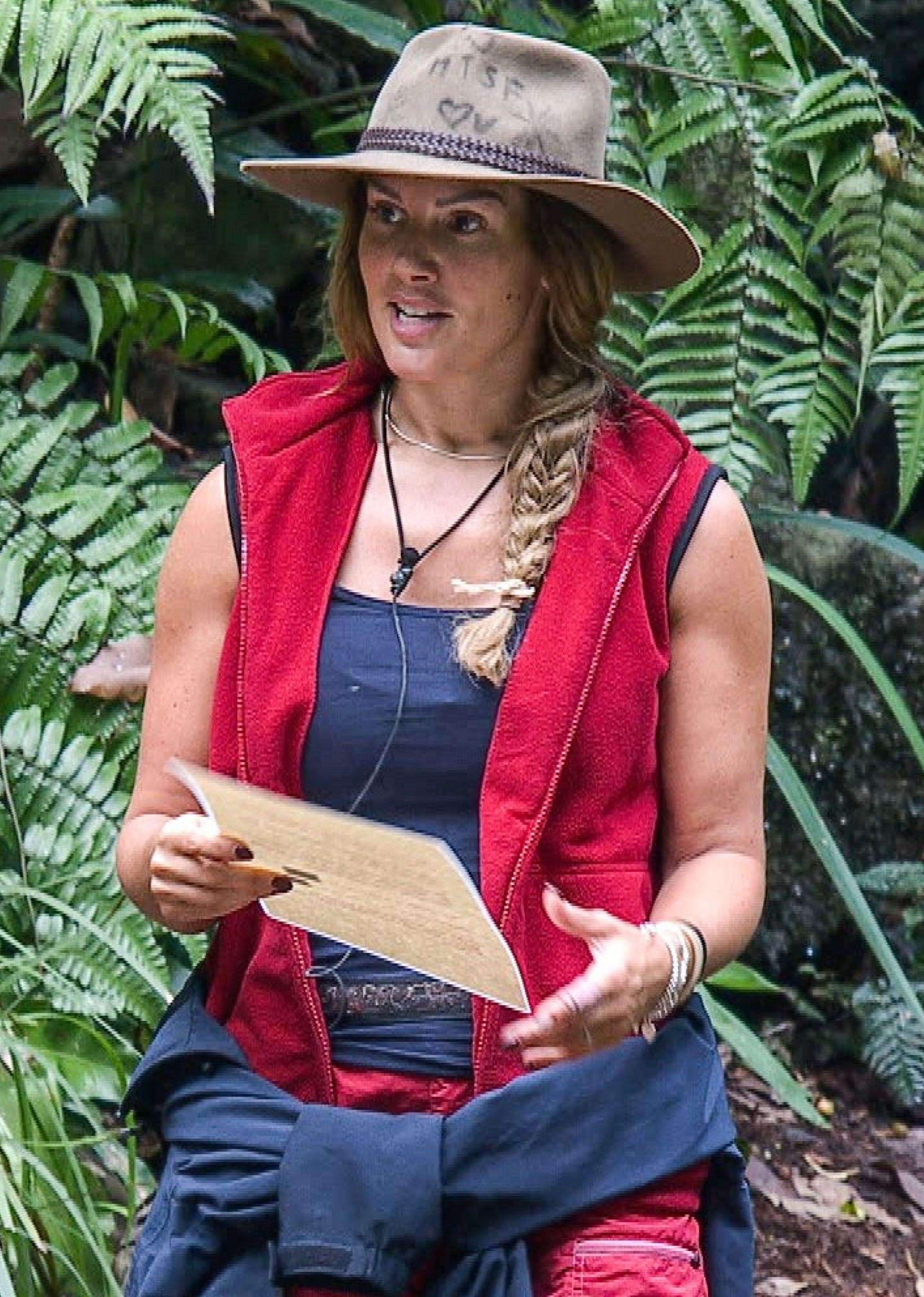 “Well, on my side [with her mum], definitely not. But I can’t speak for Jamie. It would be wrong of me to say for him. It’s not something I will get involved in, but as far as I’m concerned, no. We have to focus on our own family and our own lives and what makes us happy.

“I don’t dwell on the past, and if people want to be negative then f**k off over there and do it. I don’t want you to bring that to my doorstep. If it affects my family, then no thanks.”

The older children are aware of the rifts, but it’s not something they talk about. However, Becky and Jamie don’t close off the subject and will discuss it if asked.

“I’ll be honest if they ask, but they don’t really. They’ve got a really happy life, so there’s no need for them to ask about it. My eldest knows what went on, but she doesn’t really talk about it because it doesn’t affect her day-to-day life. It’s not a closed-door topic, though. 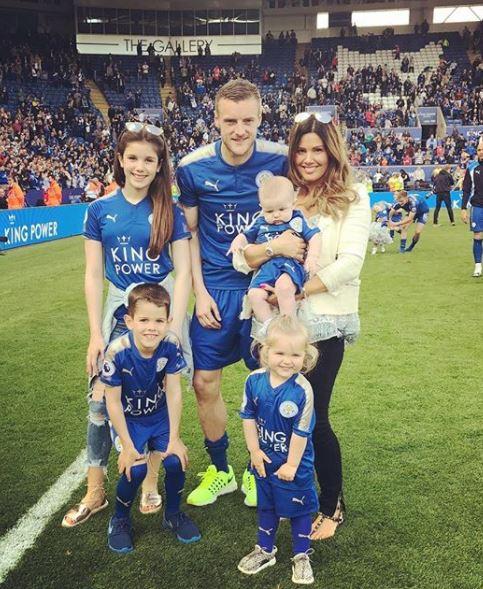 “If she wants to ask me then she can, and I answer honestly and age appropriately.

“We’re not the only family who have had fallings-out and we won’t be the last. We might as well get on with it, make the best of our situation and focus on our kids.”

There’s no doubt that Becky is a formidable force and a fighter, having overcome many difficulties in her life, including sexual abuse as a teen, a suicide attempt, domestic violence, depression and anxiety.

But you do wonder how much of her toughness is bravado, a defence mechanism she’s perfected over the years to help shield her from the brickbats. 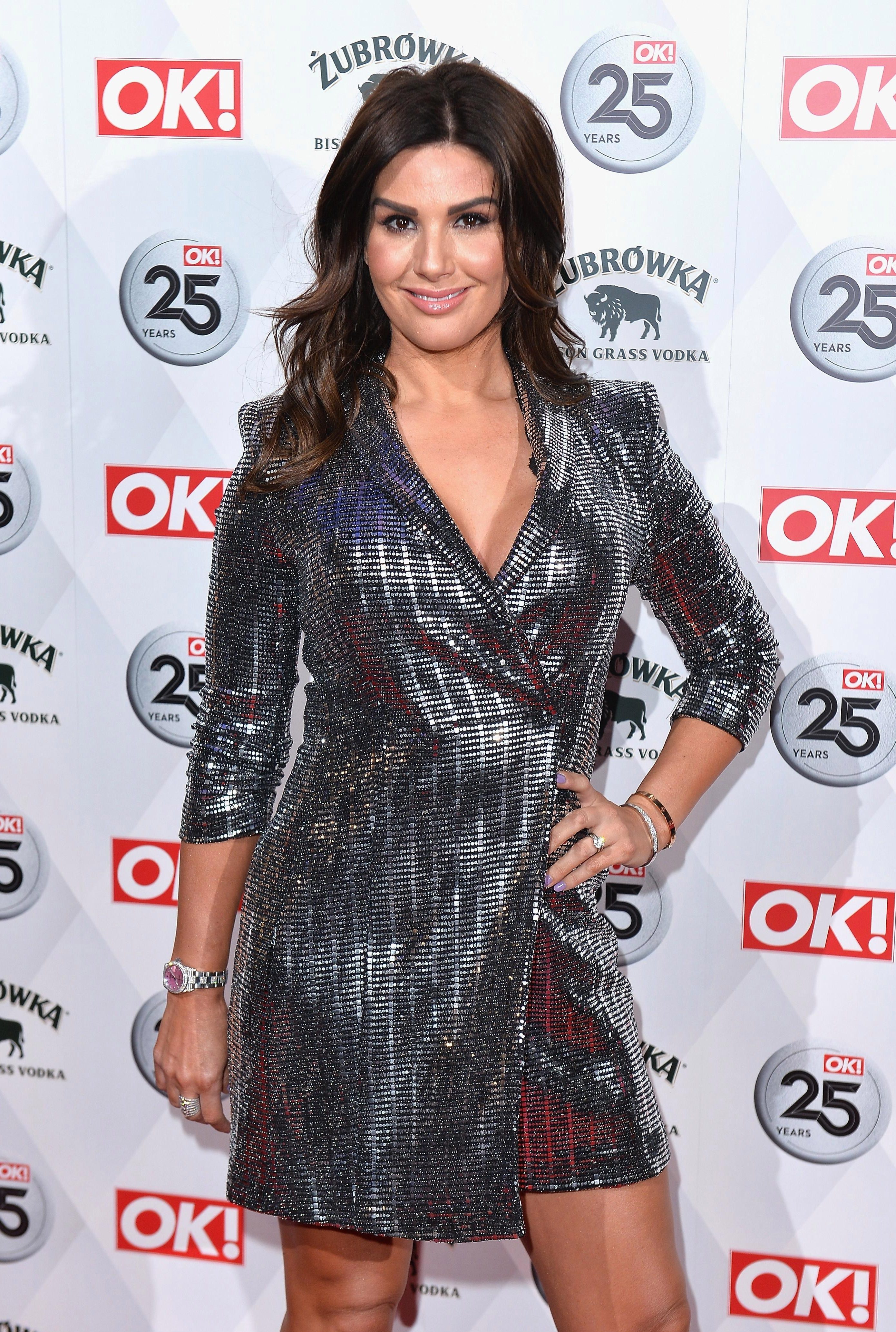 When she came out of the I’m A Celebrity! jungle to news that she’d been accused of bullying camp mate Iain Lee, the mask slipped, the tears flowed and we saw genuine hurt.

How she was edited on the show still rankles today.

“The thing is, I got on with everyone in there,” she says in disbelief. “Me and Iain used to have so many funny conversations, so when I came out I was genuinely shocked at the way it had all come across.”

Banking a reported £100,000 for her time in the jungle, Becky stressed on the show that she has her own career and earns her own money. She branded the term WAG “offensive” and “ridiculous” and railed against sexist accusations that she’s a gold-digger. 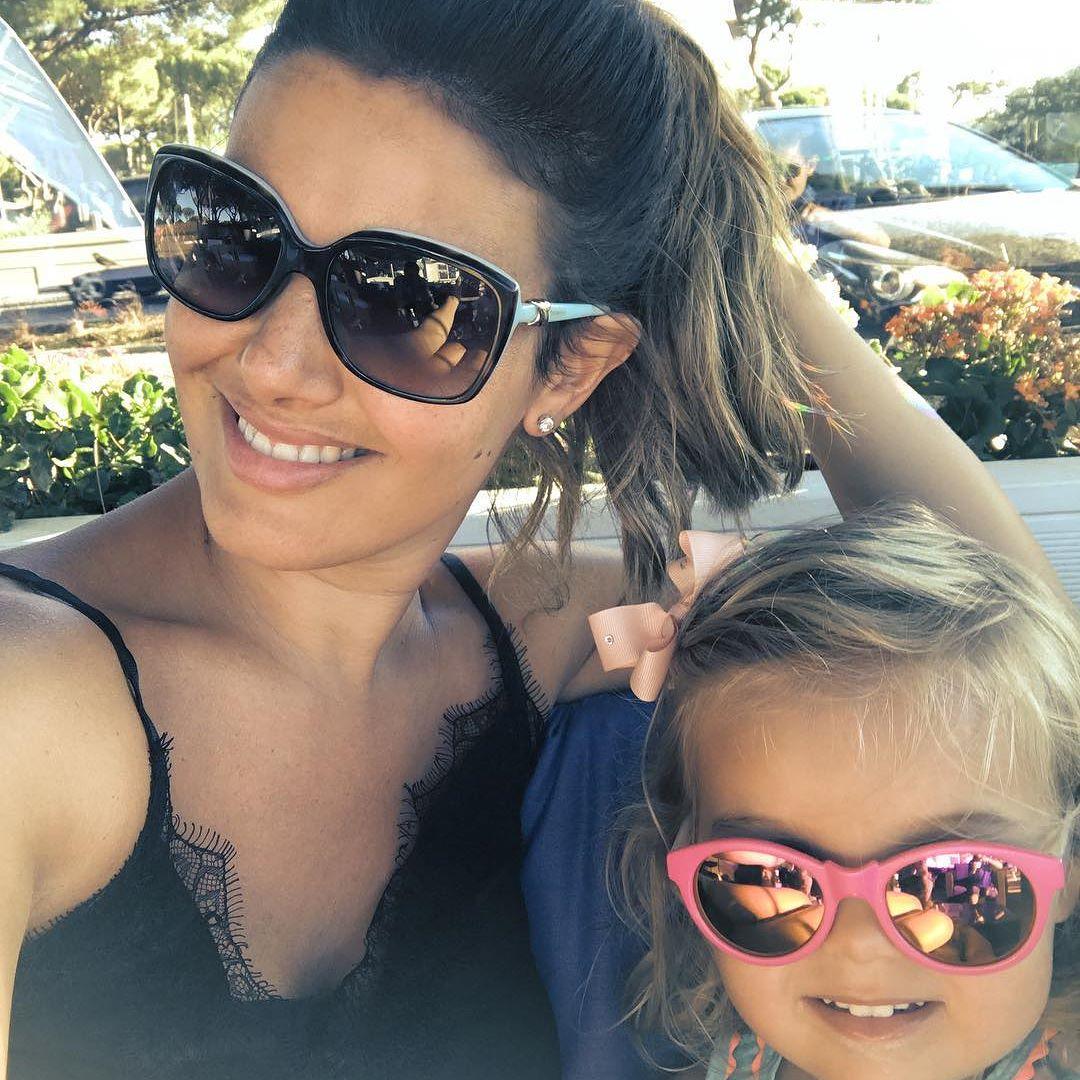 “It would be really easy for me to sit back and do nothing apart from go on my computer and shop all day because Jamie earns enough to support me,” she says. “But who would want to do that? I’d get bored.

“I am in a really privileged position and I am grateful for that, but you have to keep your feet grounded. Most importantly, the kids have to realise what is real and what is not. It would set a bad example if I sat here and did nothing because then my kids would grow up thinking that was OK.”

Looking after four children is a full-time job in itself, but to clear up exactly how she earns her money day-to-day, what would she describe herself as?

“If I had to put my job title down I’d say that I do a bit of everything. Obviously I am known for being Jamie’s wife, and I wouldn’t have had the career I have if I wasn’t, so I can’t argue with the fact that people call me that. 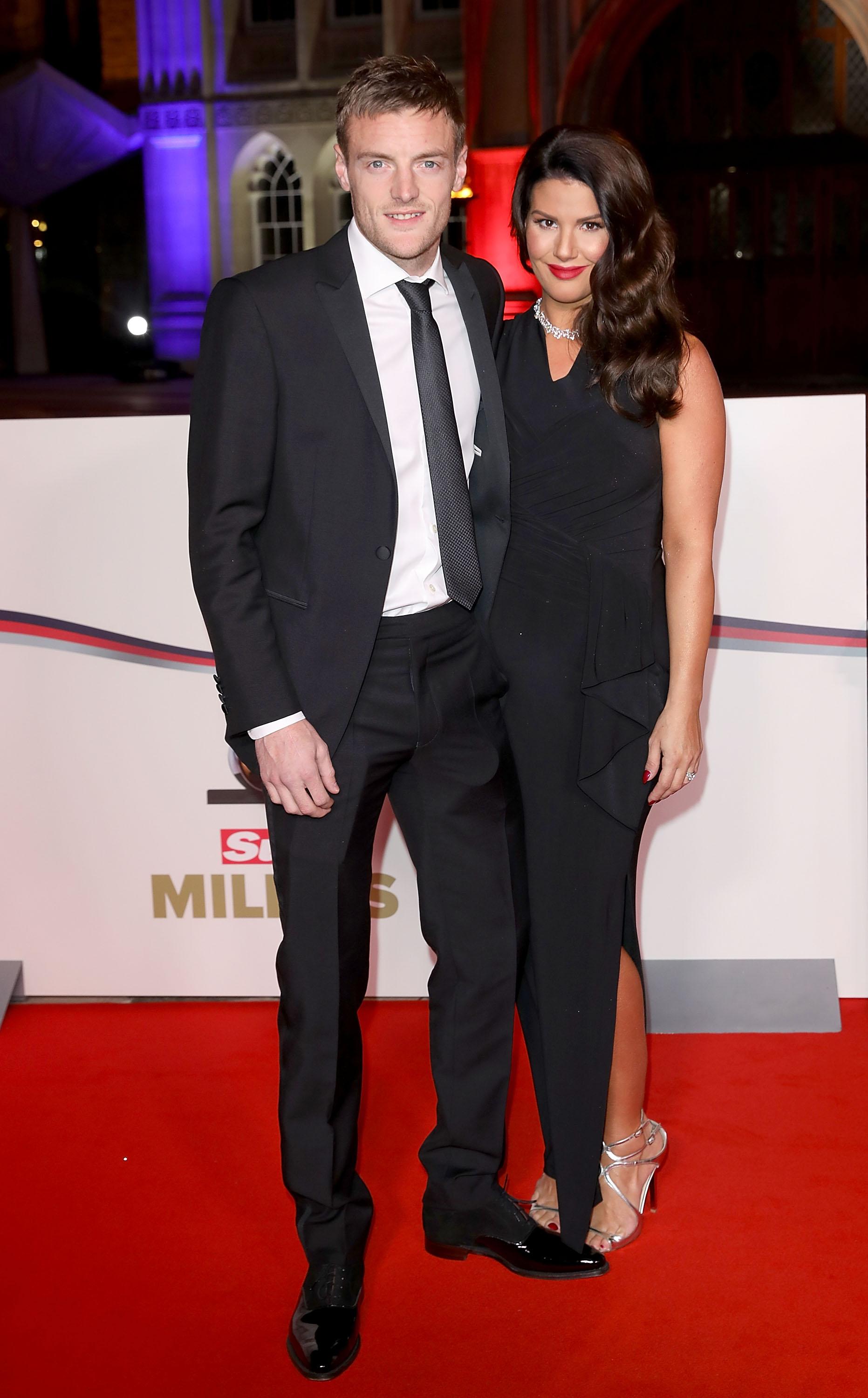 “I have brands I work with, and I’ve had a magazine column. I’ve also got all my children to look after, so it is a lot of multitasking, because I want to be around as much as I can for them. So, yes, it is nice to earn my own money, but I would never sacrifice my job as a mum to do that.”

Would she have more kids?

“We often laugh and joke about having more children. I love big families, but I don’t know if I want more. I can tell you now I am definitely not pregnant! Maybe when Finley starts nursery or school. Once you have a baby the dynamics change, though. And then there’s the sleepless nights. I love kids and families, but the practicalities of it are different.”

Contrary to football gossip, she says she doesn’t get involved in Jamie’s career – the Leicester fans accused her of pushing him to leave when Arsenal wanted to buy him for a reported £20million during the 2016 summer transfer window. 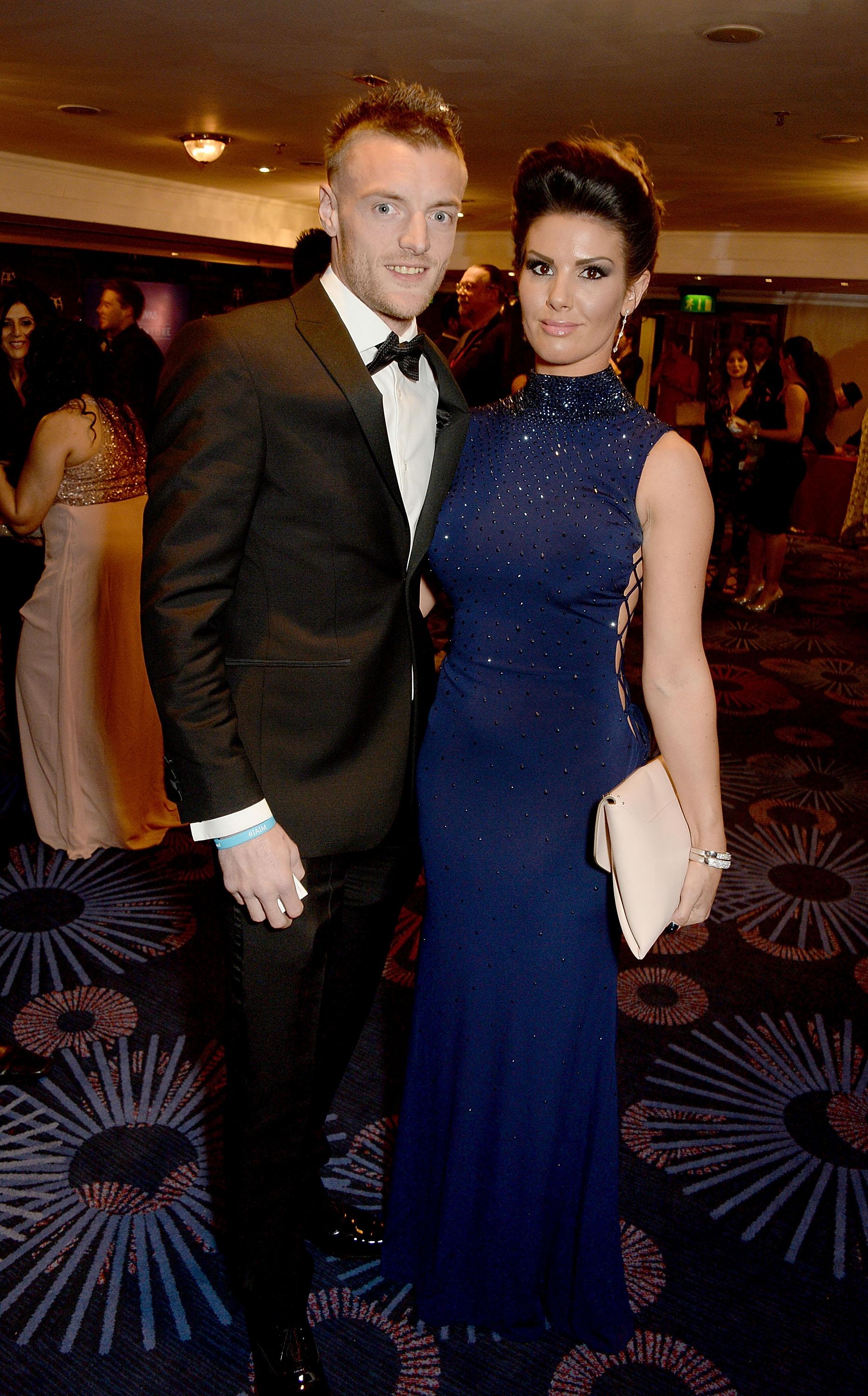 He ended up staying in the East Midlands on a new £100,000-a-week contract, and Becky took to Twitter to challenge the fans who had abused her to have “the balls to apologise”.

Nevertheless, it’s clear that she would have rather liked a move to the capital.

“He made that decision for his own reasons. There are consequences and he has to live with them,” she says ominously. It’s certainly true that Leicester – and Jamie – have been unable to come close to emulating the success of that surprise season.

She adds: “I say that to my children – every choice you make, from when you wake up in the morning, has consequences. But, no, I don’t get involved in what team he moves to cos it’s his career. He wouldn’t turn to me and say I couldn’t do something unless it was something that he really disagreed with.” 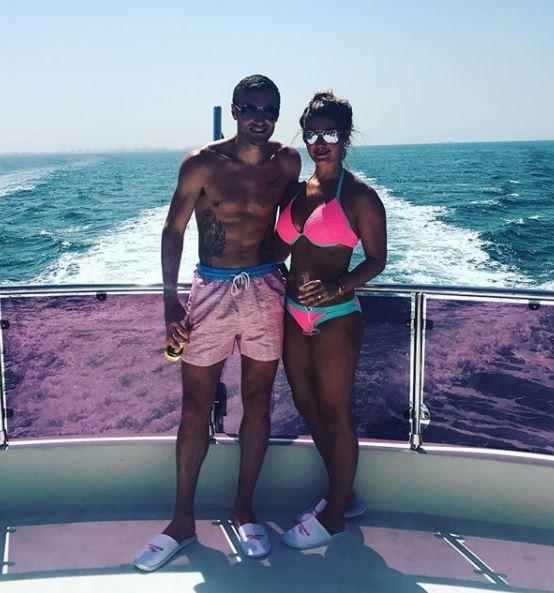 Becky says she used to get nervous watching Jamie play, but these days just feels excitement. Mind, she’s never seen him play in a World Cup before…

“The only time I get nervous now is when he is going to take a penalty,” she says, daring to mention the P-word. “I think: ‘Oh god, please, back of the net, not sky-high!”

The nation, accustomed to disappointment, will be watching, hoping and thinking exactly the same.

Lioness ‘shot dead’ at Belgian zoo after escaping from its enclosure