Chris Pratt isn’t one to take himself too seriously. Whether he’s in a t-shirt and jeans or a three-piece suit, the Jurassic World: Fallen Kingdom actor always seems to be having fun in front of the camera.

You probably already know that Chris Pratt’s body has evolved over the years — but so has his style. As such, here are 30 photos documenting the style journey of Chris Pratt during the last 15 years.

Way back in 2003, the curly-haired actor went for a dark, monochromatic look at the People’s Choice Awards.

Head in the Game

A young Christopher at the 2004 Teen Choice Awards with flat cap and tucked necklace.

Chris sticks to his casual gear at a movie premier in 2009.

Chris in his Parks and Recreation days looking every bit his character in 2010.

Chris finishes off 2010 in style in this all-black simple yet party-appropriate look.

This classic color combo will never go out of style. It didn’t here in 2012 nor will it next year.

The actor enters the Late Show with David Letterman in 2013 ready to change into something else in this off duty look.

Devil in the Details

The pocket square is a nice touch at the 2014 The LEGO Movie premiere.

The use of different blues gives this outfit a much welcome pop at this 2014 event in NYC.

Chris working that leather jacket in 2014.

More jacket goodness in 2014 courtesy of this muted bomber and monochromatic gray situation.

Subtle checks on this tailored suit add a dapper finish to this sleek look at the 2014 Guardians of the Galaxy premiere.

More tricks up his sleeve in 2014 this time rolling them all the way up.

Colorful socks and a brown suit signals how Chris liked to experiment in 2014.

If It Ain’t Broke

Chris fully embraced the check pattern on suits in 2014.

Chris started 2015 with a bang in a classic tux at the Golden Globe Awards.

Another Day Another Award 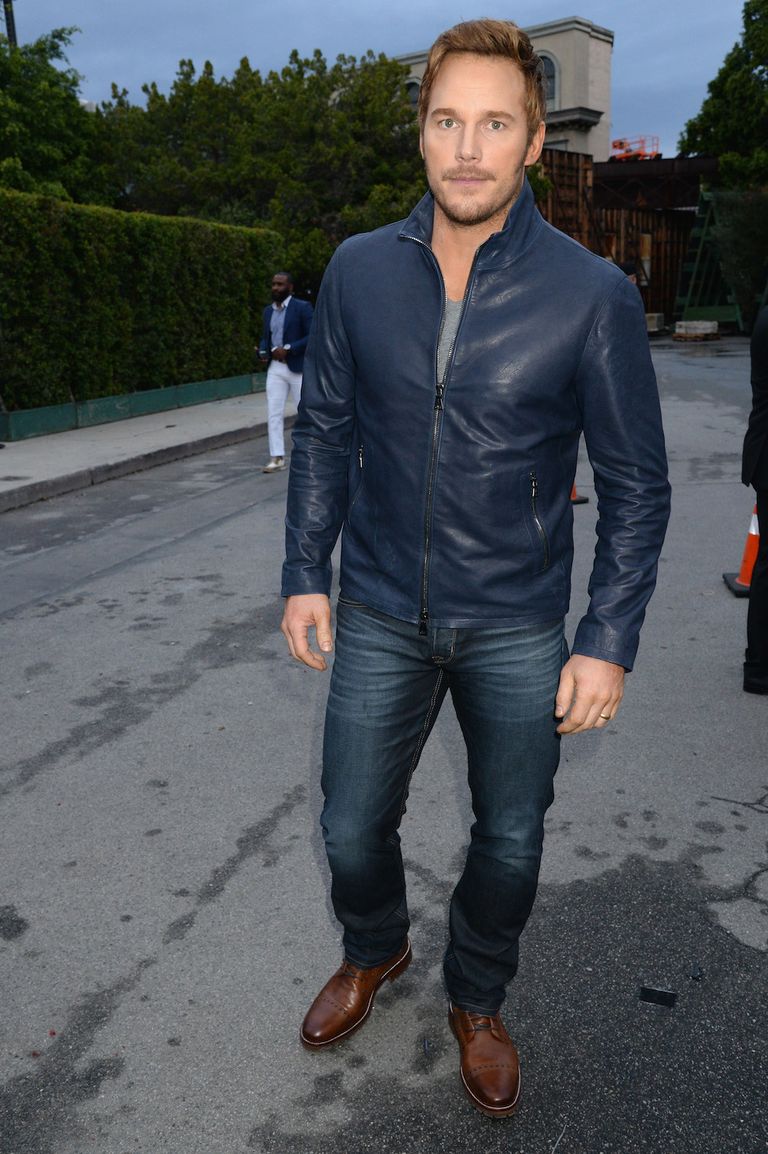 Photo by Jeff Kravitz/FilmMagic for MTV

Everything about how these pieces fit works well in this 2016 look.

Chris left the suit at home and opted for this cool play of contrasts and patterns in 2016.

Chris having fun at a 2016 screening in a relaxed polo and cap.

Did we mention how much Chris loves his checks like here in 2016?

Khaki deserves its moment too, so this 2016 Venice Film Festival look is a good time as any.

Chris in the last month of 2016 arriving in Seoul with utility gear and a nice bouquet of flowers.

For when you always have a backup bomber jacket in handy like at this 2017 conference.

Yes who knew you needed brown pants in 2017 so let Chris show you why.

The dino whisperer himself stands out in this blue suit while promoting Jurassic World: Fallen Kingdom in 2018.

And The Winner Is

Chris’s career reached peak fashion in June 2018 accepting an award in a patterned shirt buttoned ALL THE WAY TO THE TOP.

Samuel L. Jackson Hopes Spike Lee Wins an Oscar, but Thinks His Legacy Is Bigger Than an Award

‘General Hospital’ Spoilers: Mike Gets Himself Caught In A Tangled Web Over A New Lady Love

This Is What Happened To Javier Colon From The Voice