A WOMAN was left distraught after a taxi driver "fat shamed" her and allegedly told her "you need a BIGGER CAB".

Kyer Hoskin, who is a size 28, was about to jump into taxi after depositing cash at a bank in Cambridge when she claims the driver "looked her up and down" and suggested she travel in a larger car. 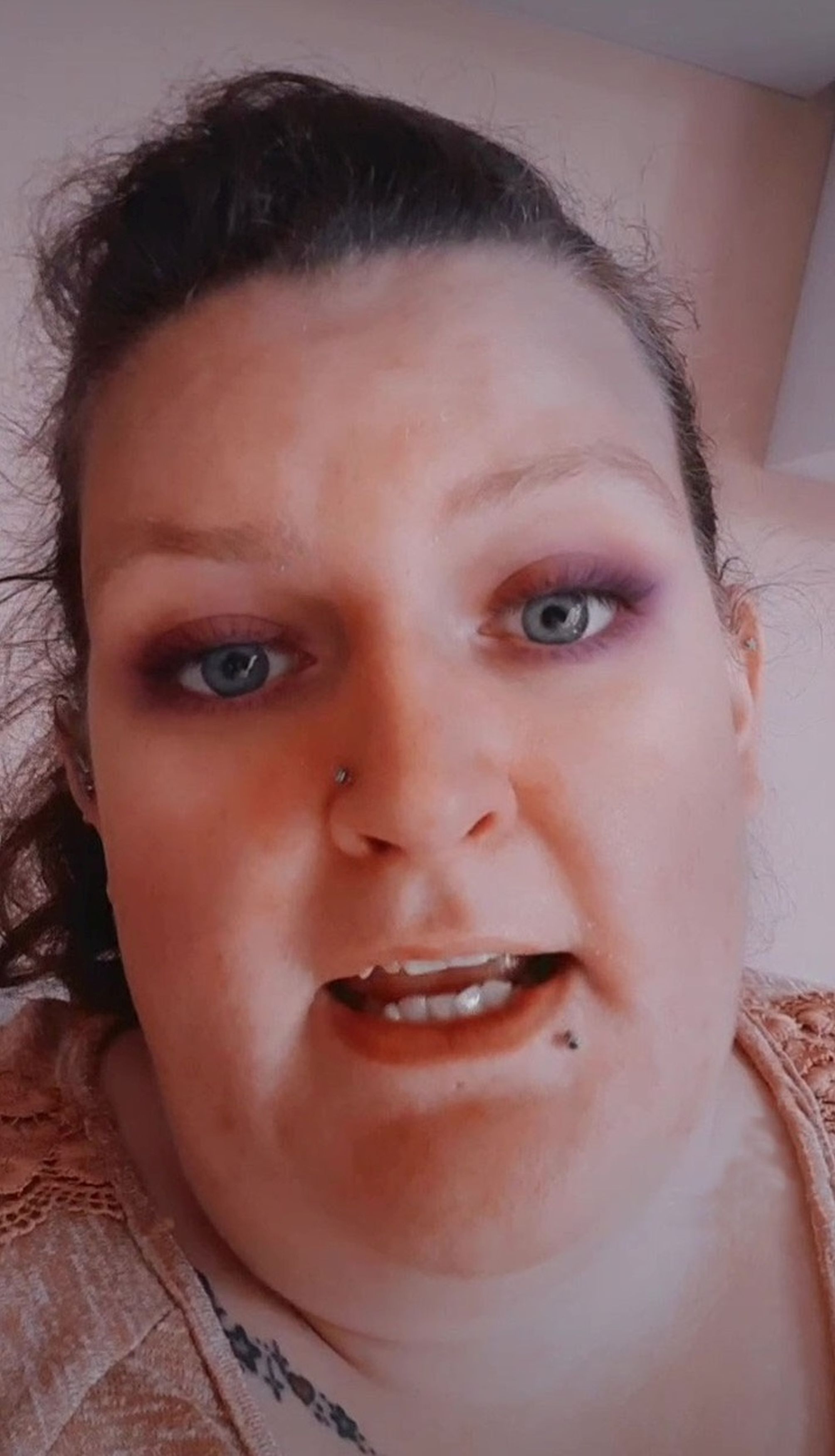 Mortified, the 29-year-old refused to get into the five door hatchback and instead went to the next vehicle along – before submitting a complaint to Cambridge City Council as soon as she got home.

Kyer claims she would have been able to "comfortably" fit into the car with a regular seatbelt as she doesn't require an extender, having travelled into the city centre that morning with no problems.

Kyer explained: "I approached the first taxi in the queue and asked him if he took card [payments].

"He was umming and aahing about the wifi on his phone and said 'it might not work when we get there so please make sure you have cash' but nobody carries cash at the moment because of covid. 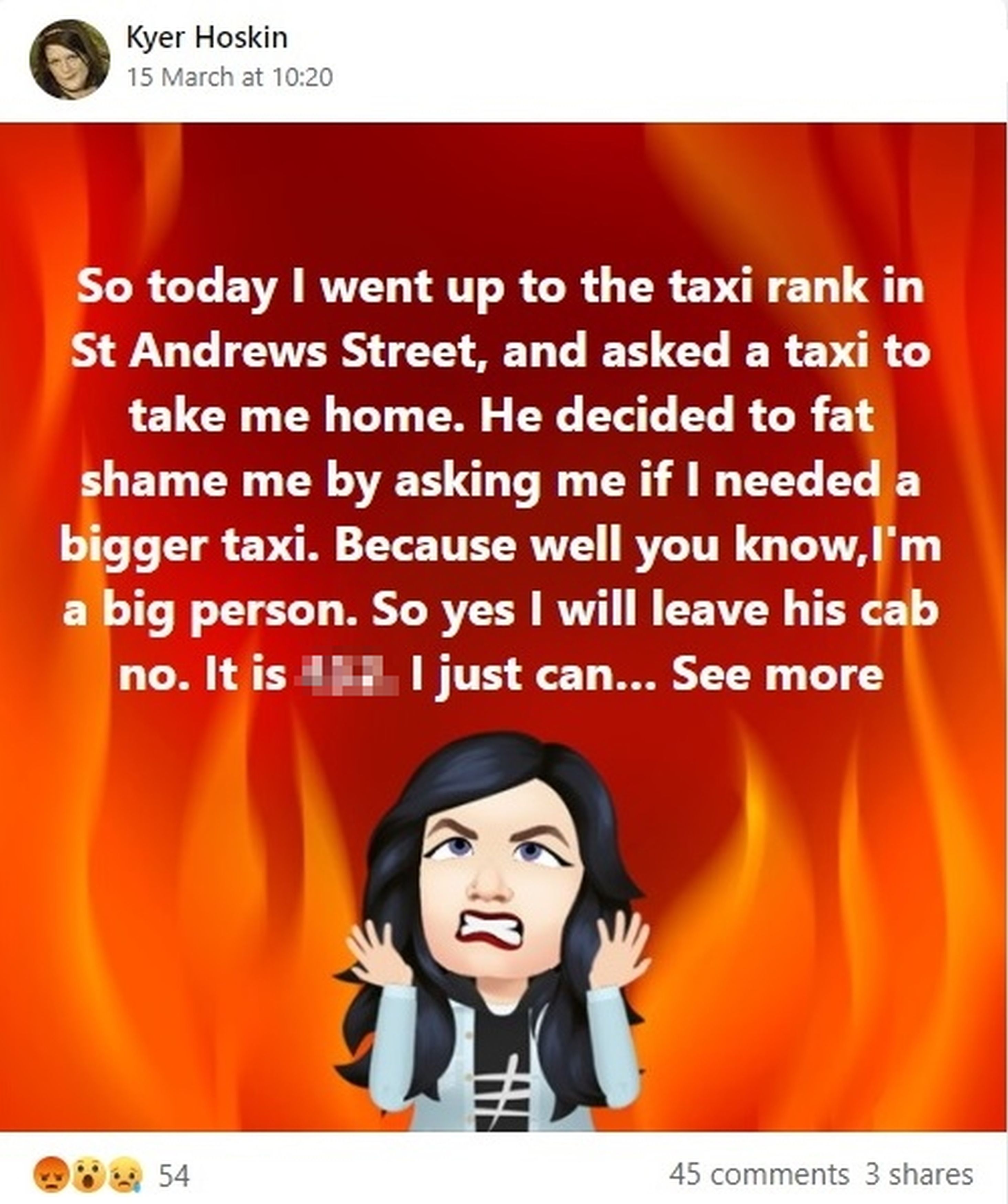 "Then he looked me up and down and as I was about to get into the back of the cab he said 'don't you think you might need a bigger one like that one over there?'

"I said 'I'm not going to get in if you're going to be like that' then I went to another taxi.

"I spoke to the driver and said 'he's fat-shamed me saying 'do you need a bigger cab because you're not really going to fit'.

"The driver said it was disgusting and I said 'Is it? it's quite normal for me, I do get it quite a lot'."

The carer, who is currently between jobs, is now speaking out about her distressing experience to ensure no-one else faces the same thing.

Kyer, who has a binge-eating disorder, blasted people's "ignorance" towards bigger people and said "thoughtless" comments could end up triggering some. 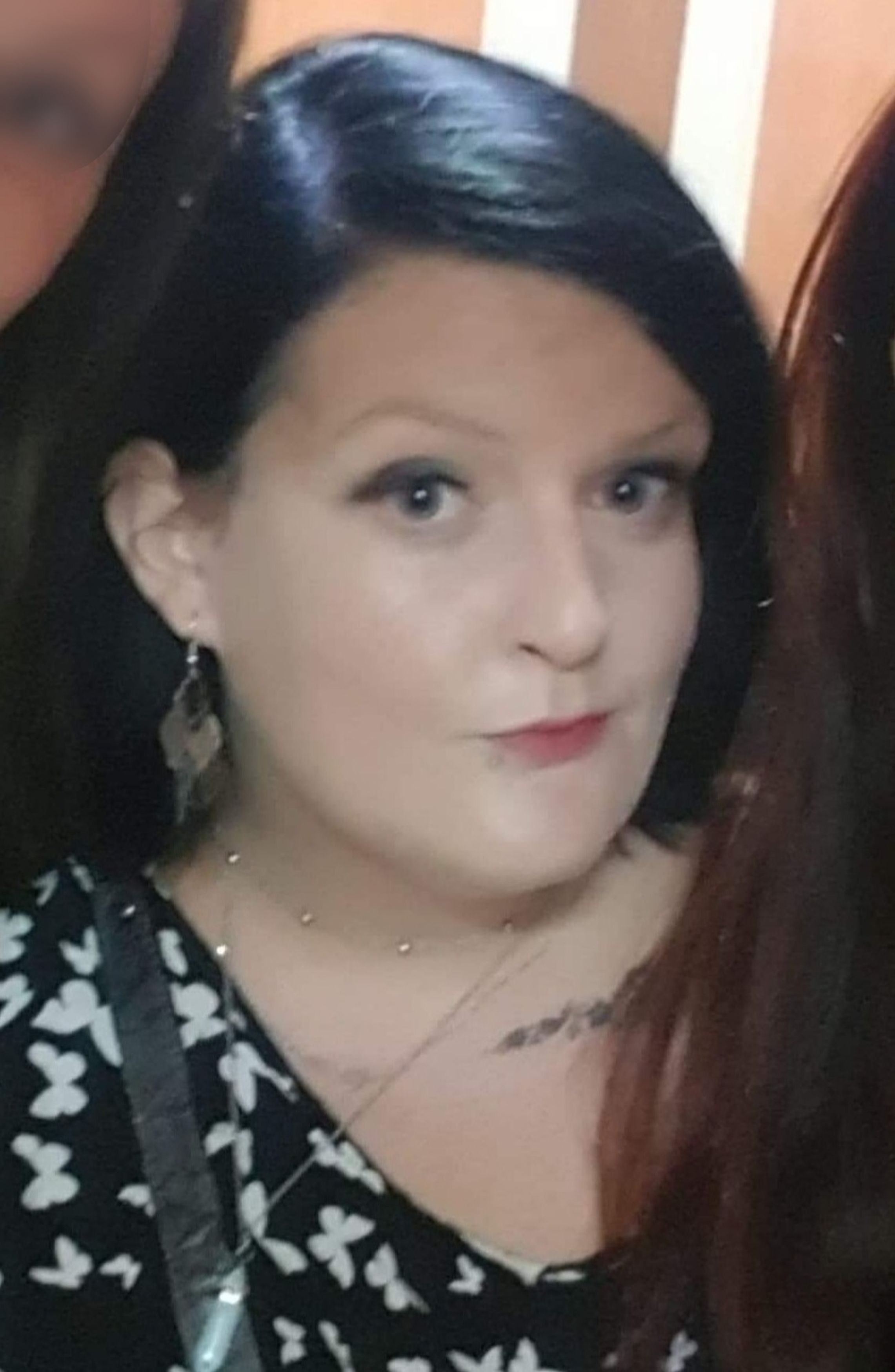 Kyer, from Chesterton, Cambridgeshire, said: "There's a reason for why I'm big, I suffer from a binge-eating disorder and not a lot of people understand that very well.

"It made me angry, [comments like this] get me quite upset. It annoyed me, nobody should speak to me like that, but I'm quite used to it.

"The week prior to this I had actually nearly been taken off the road off my moped by some people calling me a 'fat c*** get off your moped'.

"You wouldn't believe some of the responses I had on social media. One lady was trying to be supportive but she worked for Slimming World and decided to send me some vouchers. 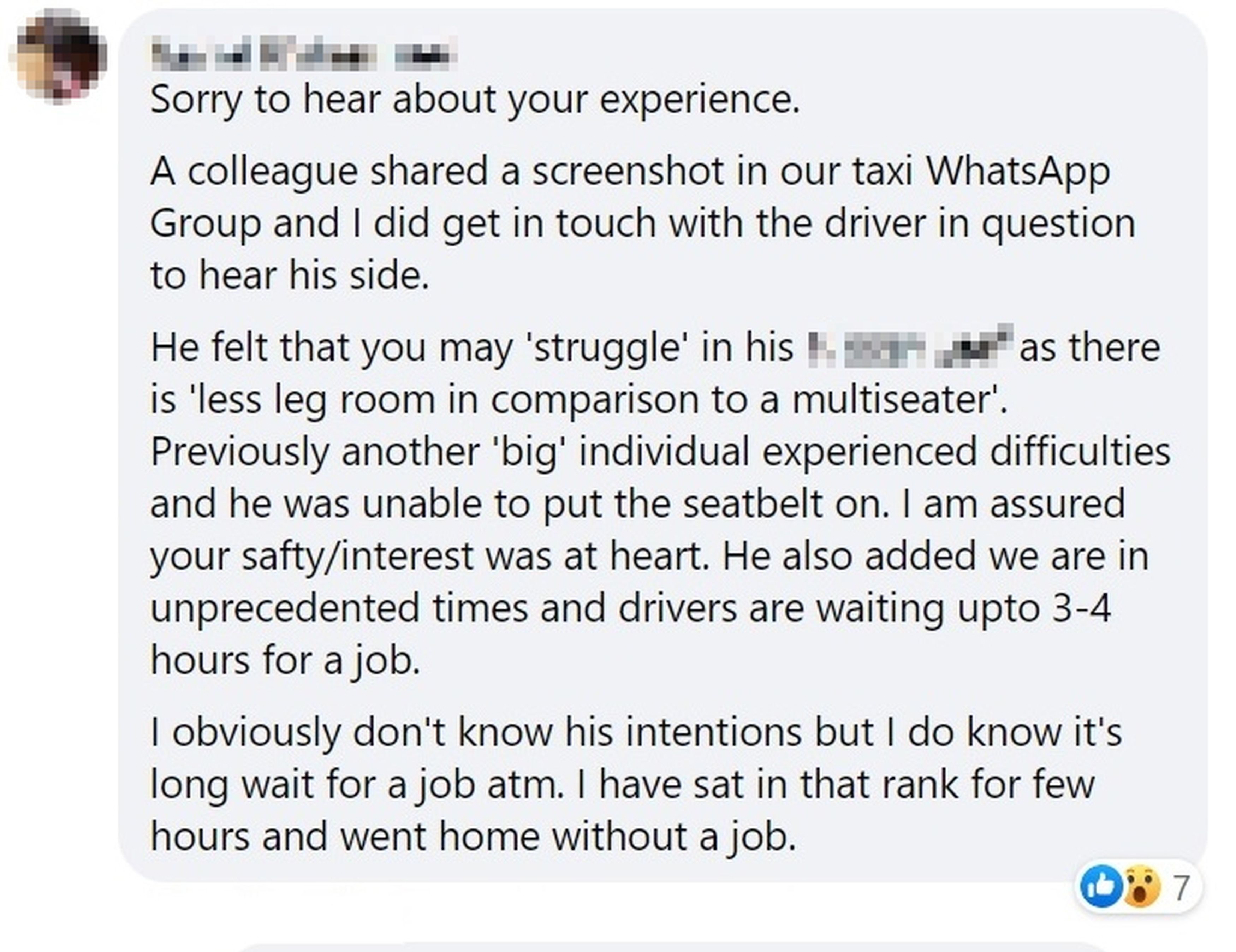 "It's hard being big, there's just no need for people to make it worse by having a go at somebody about their weight.

"It's only going to make the situation worse because they'll end up going home feeling sad and then bingeing because they feel bad."

Someone claiming to be the taxi driver's colleague defended the cruel remarks and wrote on social media that the cabby was putting Kyer's "safety and interest" at heart.

They said there is less leg room in the hatchback in "comparison to a multi seater" and previously another "big individual" was unable to put the seatbelt on.

Having travelled the 10-minute journey into town by taxi earlier that morning on March 15th, Kyer decided to get a cab back home at around 9.30am.

Kyer said: "I'd got a cab into town from mine and there was no problem, I went to deposit cash into my bank. 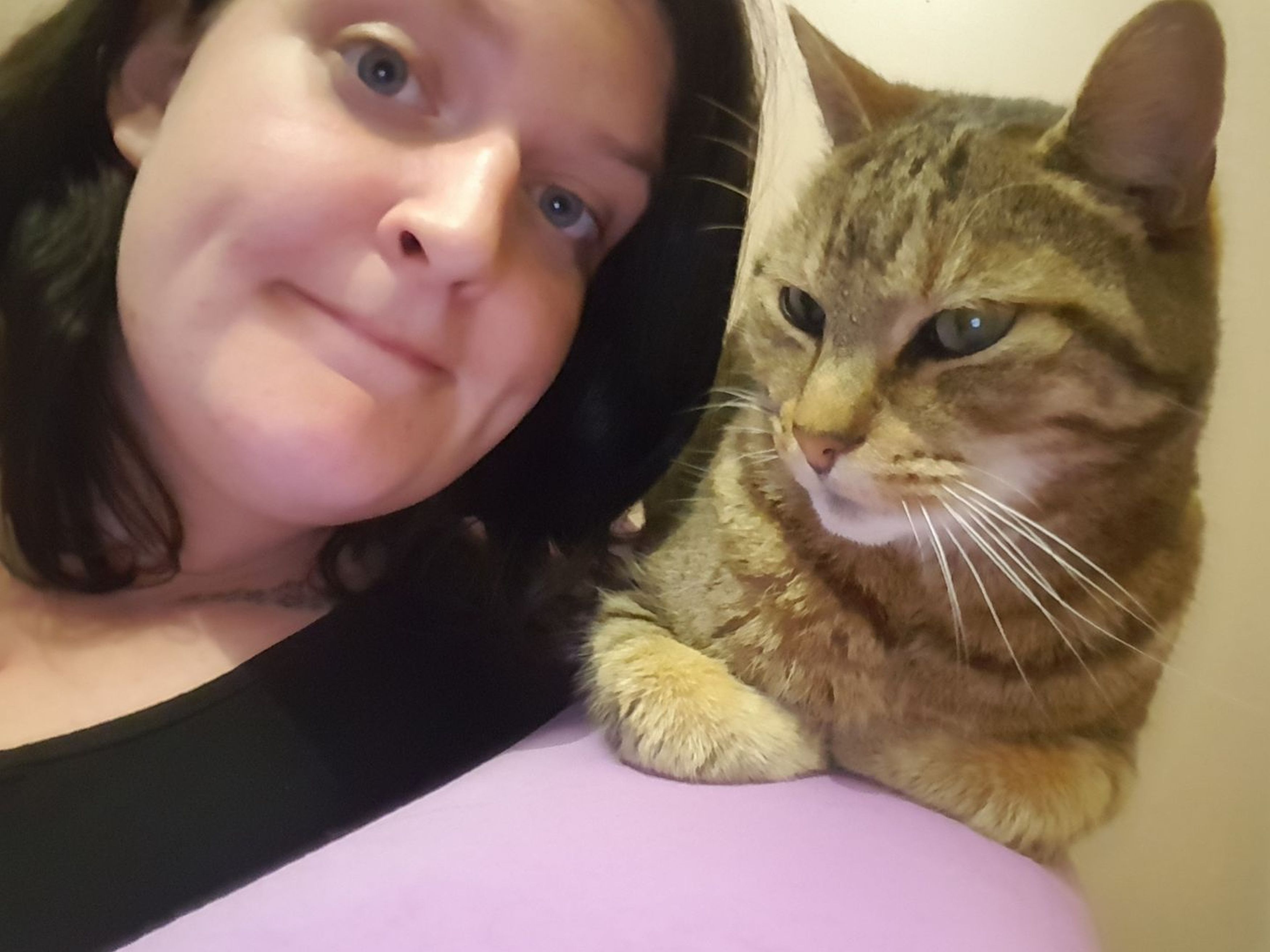 "Because of covid there was nothing else to do in town so I thought I might as well go home.

"I went to the taxi rank and there were quite a few taxis waiting there already and that's when it happened.

"The taxi driver that I did eventually end up with was really nice about the whole situation."

Upset by the experience, Kyer reported the taxi driver and received a reply stating it was the first recorded complaint that the driver had received and the incident had been placed on his personal file.

Kyer said: "I don't have problems with taxis generally, it's not like I need a belt extender usually. 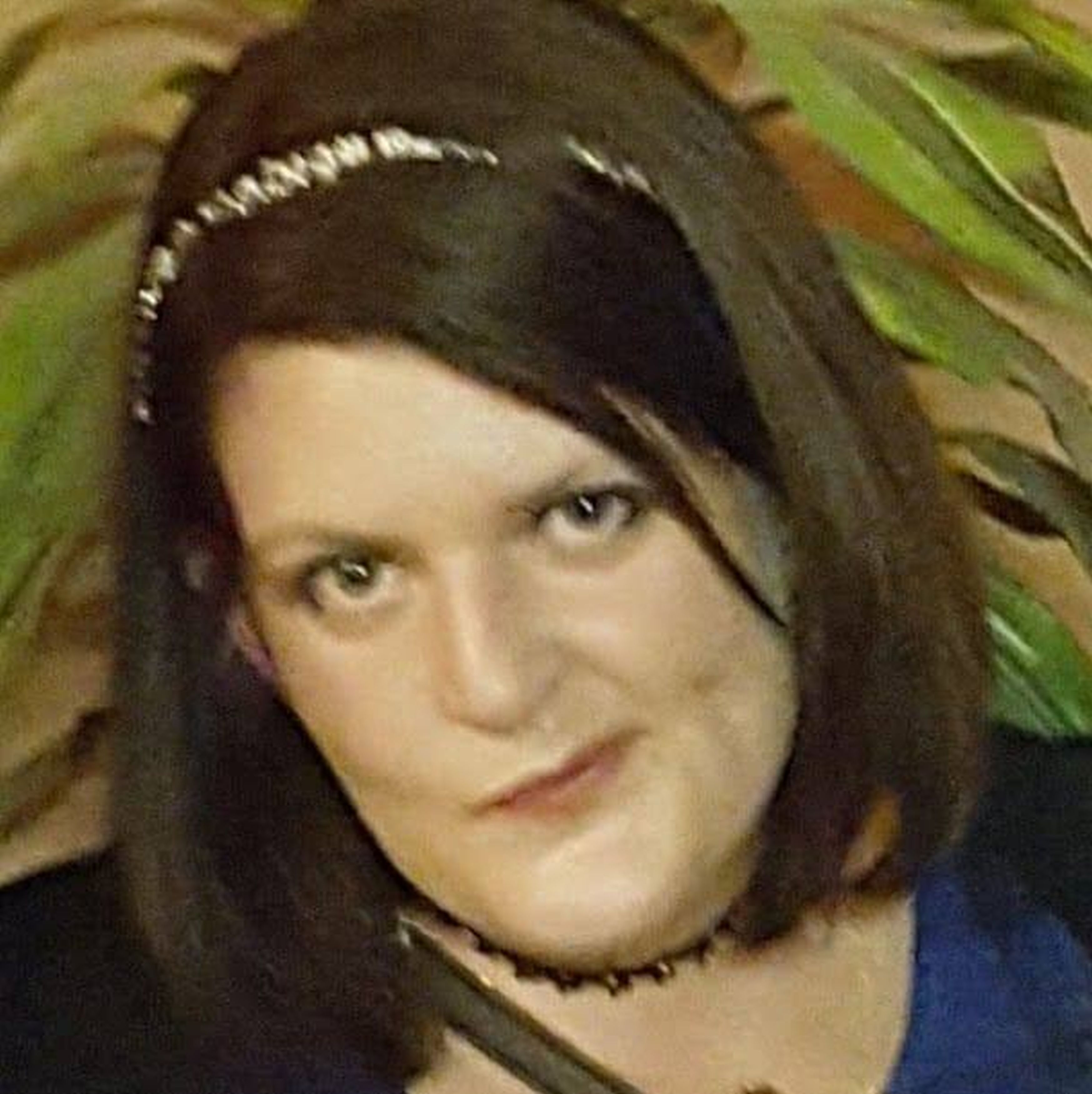 "I kind of get he was trying to be nice in case the seatbelt didn't fit but that's not my problem.

"He's a taxi driver, if a seatbelt doesn't fit surely he should have an extender available to him?

"If I can sit in the back of a taxi comfortably and I can put my seatbelt on it's fine but to be honest I really do think whether or not a person's big taxi drivers should have extenders – not that I need them but for other people.

"I shared what happened to me so it would stop people from being ignorant and maybe it would help somebody else.

"A written apology from him would have been nice, that's what I would expect from anybody.

"If anybody says anything to me now it's on them because at the end of the day they're the ones that are losing out on my money."

Kyer said people should think before commenting on someone's size as the repercussions could be extremely hurtful and even life-changing.

Kyer said: "If I had the chance to speak to that driver I would probably say 'be mindful of what you say to somebody' because especially something like that because you could end up killing them.

"I know that sounds dark but in this day and age it's very true. I know people say sticks and stones… I honestly think words are worse."

After sharing her experience on Facebook, social media users flooded the comments with supportive messages.

One person commented: "Absolutely disgusting behaviour, here if you need a friend."

And another wrote: "Definitely report him hun. Doesn't matter what size you are that's a hurtful thing to say.

"I'm a larger lady myself and understand completely how this can knock your confidence. Always here if you need a chat." 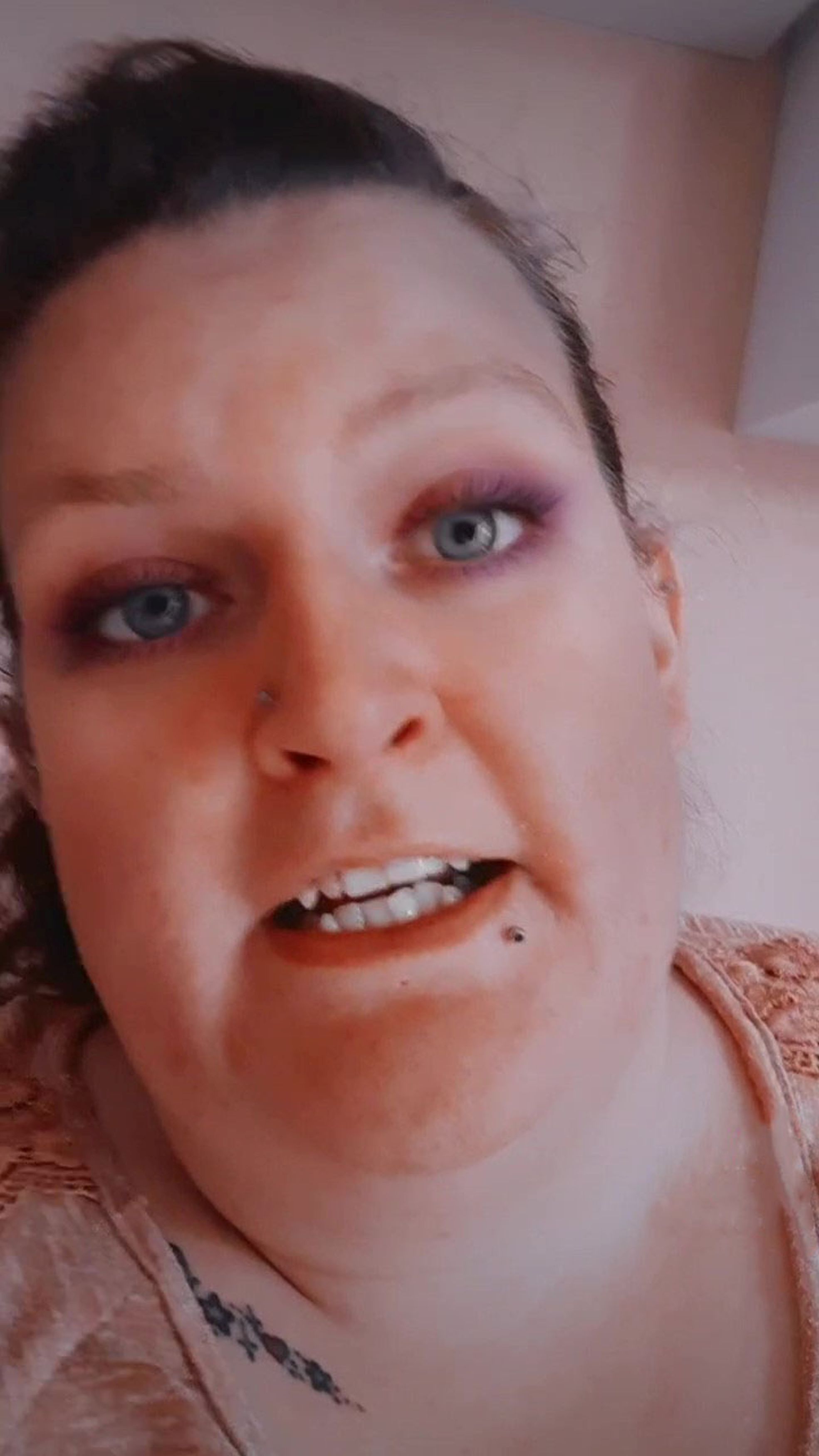 A third said: "Oh no this is so wrong, this is disgusting and should not happen.

"I am incensed for you. I've been fat-shamed myself and I know the pain, the guilt, the shame I felt.

"I wanted to lose weight but didn't know how or if I could start and having someone slate me and put their judgement of me on my shoulders, that already carries my own (unfairly to be fair, because happy counts not size) it was too much. People can be horrendous."

While a fourth wrote: "Aaargggh! Rage!!! What a pr**k! Obviously made him feel inferior because he has little man syndrome! Obviously not ready for this jelly."

A Cambridge City Council spokesman said: "As Licensing Authority, we take the behaviour and conduct of our licensed taxi drivers extremely seriously.

"Our officers work hard to seek to ensure all our licensed drivers are fit and proper, deliver a high standard of service; and protect the health and safety of the public at all times.

"Any allegations made against any Cambridge City Council licensed taxi driver is thoroughly investigated by the Authority, and appropriate enforcement action is taken in accordance with our licensing enforcement policy."

Meanwhile, woman fat-shamed by date on birthday gets revenge by losing 5 stone and rejecting him.

And this pregnant mum says she was ‘fat-shamed’ by her midwife who told her to go on a diet – but she’s only a size 12.

Plus this 'bully’ personal trainer claims obese people SHOULD be fat-shamed so they ‘keep their mouths shut and stop overeating’.

Mike Ashley is in rescue talks with Debenhams