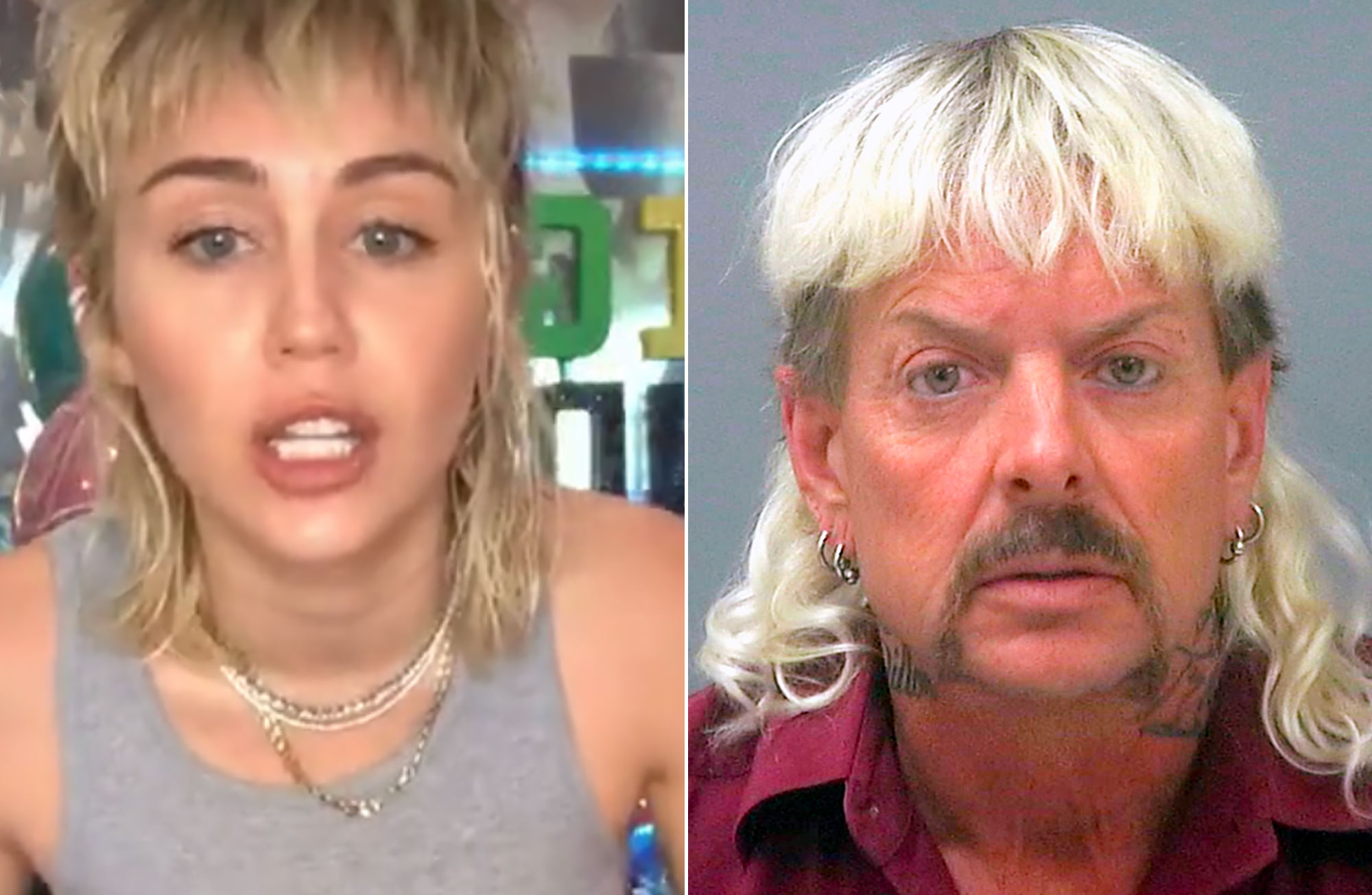 Mullet madness! The Internet has officially picked up on the fact that Miley Cyrus and the infamous Joe Exotic have a similar hairstyle.

Ever since Netflix’s Tiger King was released on Friday, March 20, the docuseries has been a hot topic of conversation. The now-incarcerated Joe Exotic has quickly become a subject of fascination for viewers, due to his wild personality, concerning decision-making skills and most importantly: his bleach-blonde mullet. The good people of the Internet have already gown wild over John Finlay’s new teeth.

But back to Joe Exotic’s, um, exotic ‘do. The former G.W. Zoo owner’s hairstyle features bangs that fall in the middle of his forehead in choppy pieces. Interestingly enough, social media’s been comparing his unforgettable look to that of the stylish Cyrus.

The 27-year-old’s been extra active on social media lately thanks to her new daily Instagram Live talk show series, Bright Minded. The singer’s been rocking casual-cool outfits like tank tops and sporty leggings that pair perfectly with her very own “modern mullet” hairstyle.

During Cyrus’ recent IG Lives, hundreds of people have taken to social media to compare her hair to the felon’s. “Why Miley Cyrus look like Joe Exotic?” wrote one user. Another cracked a joke and said, “Are we absolutely sure that Miley Cyrus isn’t Joe Exotic’s daughter? The people have a right to know.”

“I’m telling you: Miley Cyrus based her mullet off of Joe Exotic’s,” claimed a third Twitter user.

Cyrus hasn’t addressed the comments directly, however, she has compared her style and color to Joe Exotic’s! On Monday, March 30, she shared a meme of the tiger lover’s mugshot on her Instagram Story. The text said: “FaceTiming my hairdresser to ask how I fix the cut and color I gave myself.”

As a text overlay, she wrote, “Wayyyy too real. Cyrus clearly isn’t denying that her and Joe Exotic do, in fact, share some similarities when it comes to their hair.

The “Slide Away” singer debuted her statement-making mullet in January, brought to life by celebrity stylist and namesake brand founder Sally Hershberger.

“Miley wanted to go more punk,” the stylist told E News! at the start of the year. “She wanted something edgy. We went with a modern mullet that she can wear sleek, but also wavy and messy.”

Before her appointment with Hershberger, Cyrus’ last cut was on her birthday, courtesy of her mom, Tish. On November 23, 2019, the mom of five used a pair of craft scissors to cut about two inches off of her daughter’s hair.

Tish shared a video of the experience on IG. In the accompanying caption, she wrote, “Giving @mileycyrus a little B-day haircut!! #staytuned #itsgood.”