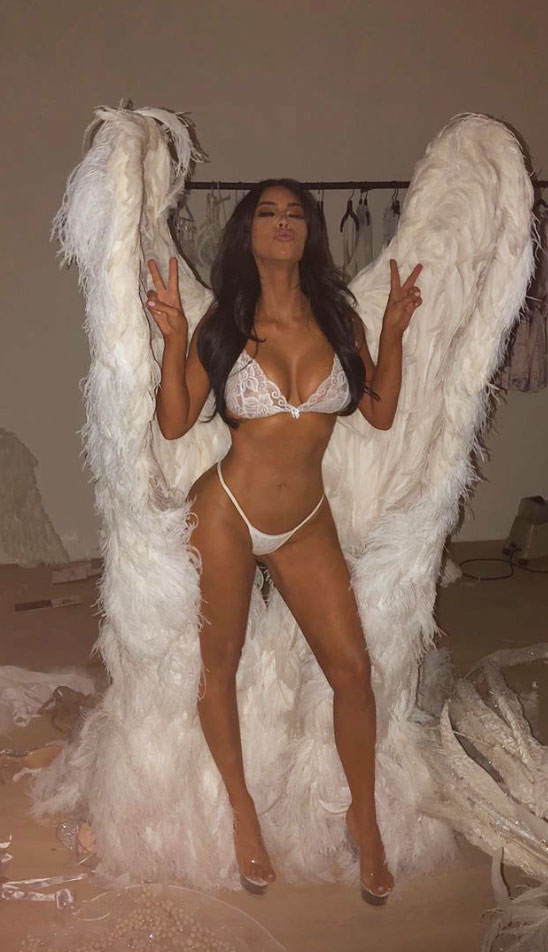 There are certain coordinated seasonal moment when we expect the Kardashian-Jenner family to totally slay. Yes, their annual holiday card is one of them. But another event that the sisters Kardashian-Jenner do really well: Halloween. And they seriously raised the bar for costume dressing as Victoria’s Secret Angels.

Now, sure, Kendall Jenner may have walked in the annual VS fashion show in years prior, but on October 31, Kendall, Kylie, Kim, Khloe and Kourtney proved that they might all have some serious chops rocking angel wings in the future. And the best part: their costumes came courtesy of Victoria’s Secret.

Kourtney, for example rocked an classic white lace balconette bra with matching lace briefs, adding a merrywidow garter for some extra sex appeal. And her wings? They were the most elaborate of the crew, with thin long plumes.

Kim, on the other hand was one of the more scantily clad for the affair, rocking a white lace g-string worn high on her waist and a white lace triangle bra. And her wings: they were massive. Taller than her, and trailing behind as she strut her stuff in stilettos.

And Kylie’s look was just as next-level. The beauty magnate rocked Candice Swanepoel’s iconic nude crystal-embellished catsuit with a nude satin bra. Her wings, unlike her older sisters’, were quite a bit smaller, showing of the insanely intricate one-piece previously worn by the iconic Angel.

Then we have Kendall, who had walked in the Victoria’s Secret Fashion Show in 2015 and 2016. She picked up her wings for one more night, rocking a cheeky bustier bodysuit with a seriously high-waisted bottom.

Stars Without Makeup: See Stars Going Makeup-Free and Loving It!

Last but not least, there was Khloe. The Good American founder sampled vibes from both Kim and Kourtney’s looks, wearing a lace string bikini bottom and a white lace balconette bra.

Given that all of the getups were real Victoria’s Secret runway looks, this gives the brand some serious clues that the entire Kardashian-Jenner family could kill it on their runway.

Let’s face it: this family set the bar high for their 2019 Halloween looks. But at least we have their holiday card to look forward to in between.

Man threatens employee with handgun during robbery in Bedford: police

‘Happy Together’ Review: Harry Styles’ CBS Sitcom Plays Like a Parody of Itself — and It Works