In the city’s outlying areas, Latino teenagers are shaping a new music scene. 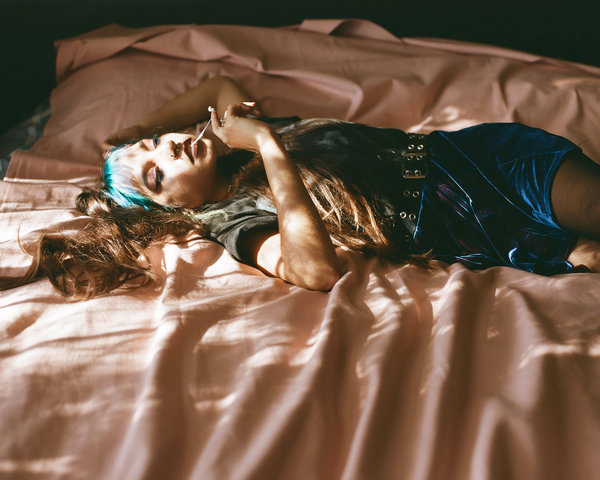 The city of Los Angeles is steeped in a rich punk tradition that dates back to the late 1970s. The films that make up “The Decline of Western Civilization,” by Penelope Spheeris, are among its most compelling visual documents.

In the first of the series, Ms. Spheeris tells the story of Hollywood at the end of the 1970s, when Black Flag, the Germs, X, Fear and other bands were coming up. By the third installment, which fast-forwards almost two decades to the mid-’90s, the scene had changed somewhat. In that film, the faces are fresher, the band names are new.

Still, the defining characteristics remain consistent. Alienation with mainstream life and culture prompt the new generation of punks to dress in the same ripped clothes covered with band patches and carry the same attitude as their antecedents. In both films the punks are largely white, teenage and male.

Though many aspects resonate in the punk scene today, the demographic has shifted considerably since the time of the last “Decline” film. These days, at many punk shows in Los Angeles, much of the crowd is Latino. This is in part because of population shifts: Latinos now account for more of California's population than any other ethnicity, and Los Angeles County has the largest Latino representation of any county in the United States.

Many of the musicians and show organizers are based in outlying areas of the city. Areas east of Interstate 110 and south of Interstate 10 — Cudahy, South Gate, Compton, North Long Beach, East Long Beach — have seen the development of a new scene with bands that have formed just in the last year.

In addition to place, these punks are bound by a shared sense of boredom and disaffection with mainstream culture. It’s what led them to seek refuge in music — and not only punk music, but also classic and psychedelic rock, metal, goth and post-punk.

“The first bands I listened to were classic and hard rock bands like Led Zeppelin,” Martin Castro, 17, said. “When I first heard punk, I heard the Germs, I was blown away, and I knew I could bring what I learned on the guitar into writing punk songs.”

He is the guitarist in a band called Diversity, whose members are from Cudahy/Huntington Park. Their music, which Mr. Castro writes, is fast and intense and harks back to the politics of 1980s Reagan-era punk bands they idolize, like MDC (Millions of Dead Cops). With a serious and urgent demeanor, Albert De La Rosa, 17, the singer, delivers lyrics about international issues, like the disappearances of students in Mexico.

“We are not a political band,” said Enrique Murillo, 18, known as X-Ray. He is the singer of NNN, an East Long Beach band formed a year ago, after he approached his friend Enrique Cruz, 20, a guitarist known as Kross, to make music with him. Their first track, “Scum Hole Ripper,” speaks to a punk-adjacent pastime: skateboarding. Other crowd favorites, like “Creature Kill,” are fun and energetic.

The lyrical subject matter is not so light in the case of the Vital, also of Long Beach but from the gritty north side. The vocalist, Chris Ramirez, 19, known as Breadcrum, said that his band is “the most hated,” given that they ridicule punk rules and conventions in songs like “Punk Rock Parody.”

“People want to claim that punk is this or that,” so the point of his music, Mr. Ramirez said, is to disrupt those preconceptions.

Though the subject matter differs from band to band and song to song, there are certain common characteristics. A feeling of disaffection with family life informs much of the music. And at virtually any show, there is a mosh pit of thrashing teenagers.

NNN’s drummer, Georgeff Becelinof, 19, described the time he spends with the band as a kind of catharsis. “We play to hang out with friends,” said Mr. Becelinof (known as George), and to briefly leave behind the stresses of home life. As he described his unsteady family life and his time in the foster care system during his teen years, tears welled up in his eyes.

His bandmate Antonio Garcia, 17, whose nickname is Coyote, said that he too had a strained home situation. “I just try to never be home,” he said. “I’m either out skating or going to shows.”

German Ambriz, 19, of Diversity, said that his parents don’t take his music seriously. “They hate it,” he said. “They think I’m just messing around and not getting a job.”

Aurora Zavala, 20, of the Pantheons, said: “My parents are super-religious. My dad really hates the way I dress.”

Leslie Mayorga, 19, a show organizer, was more sympathetic to her father, who was a punk himself. In the 1990s, he played in a band called Kracneo in Tijuana, Mexico. “I don’t talk to him anymore,” she said, “but I am glad what he taught me.”

Ms. Mayorga’s parents met in Tijuana’s punk scene before they immigrated to the United States, where they exposed Leslie to Spanish-singing bands from both Latin America and Spain (“Paralisis Permanente, Eskorbuto, those bands smack!” Leslie said).

Molly Diaz, 18, who is also a show organizer, shares her friend Leslie’s experience. Her mother grew up in Los Angeles and exposed her to the punk style and music at an early age.

Then there are the punk roadie parents. Diversity relies on Albert’s mother and father, Rosalba Brito and Tito De La Rosa, to haul their gear to shows in the family minivan. The parents are also fixtures in the crowd at every one of their son’s shows.

“I did not like that Albert would go out to the shows,” Ms. Brito said. “I was worried he would be around the wrong people, and I didn’t let him go unless I came with him.” But now, she says, “I am very proud, and all these boys are good kids.”

It’s a new version of the story that punk has told for decades: Alienation breeds creativity breeds community. The music, whether apathetic or politically charged, interactive or combative, is the most honest venue these kids have to communicate their feelings. And they’ve found a crowd that is willing to listen.

Daniel Jack Lyons is a photographer who divides his time between New York, Los Angeles and Mozambique. Cenan Pirani lives in Los Angeles, where he plays in the band the Right.

“My best friend and I are soulmates, and it has nothing to do with romance”

Which Royal Weddings have taken place in Windsor? From Prince Harry and Meghan Markle to Prince Charles and Camilla Parker Bowles

Teresa Giudice Vacations in Jamaica With Her Four Daughters: Pics