WEDDING guests have slammed a bride and groom for serving up pastries and fruit as the official meal – with people saying it’s more appropriate for kids.

While a wedding is arguably about love, it’s no secret that a slap-up meal and a free bar are the perks of making it on to the guestlist. 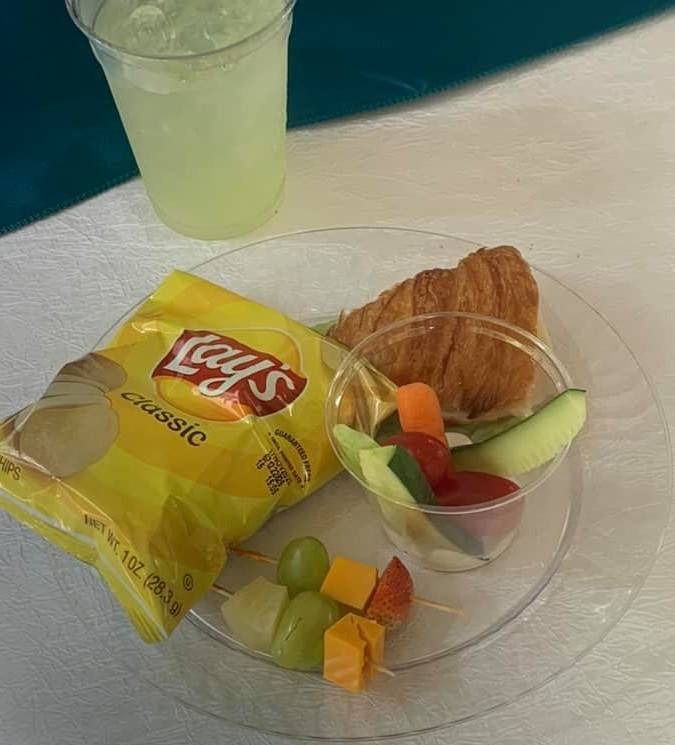 Which is why some guests were horrified when they were served a meal of fruit, a packet of crisps and half a croissant.

An outraged bridesmaid shared a snap of the pathetic meal to Facebook, where she raged against the couple for providing such a paltry spread.

She wrote: “We get our ‘food’, which was half a croissant sandwich, fruit on a stick, veggies in a cup and a bag of chips.”

That wasn’t the only thing which annoyed her, as she continued: “None of the chairs matched at the reception… it just looked a mess," 7News reported.

This is literally what I gave my toddler for lunch today

While the random assortment of chairs can be overlooked, people were equally outraged at the bizarre meal which was served.

One woman claimed it looked like what she was served her kids for lunch, rather than a sumptuous wedding breakfast.

Commenting on the snap, the mum wrote: “This is literally what I gave my toddler for lunch today minus the chips.”

Another said: “Chips! I don’t know whether to laugh or feel sad.”

A third thought: “They couldn’t even spring for a full sandwich? Just half each? Damn.”

While this person added: “Yeah, that’s the saddest thing I ever saw that didn’t involve puppies getting hurt.”

While this bride of disabled husband hits back at cruel trolls who claim her marriage is a sham & she’s only with him for his money.

Plus this Disneyworld proposal ridiculed as couple get engaged in front of the castle as another bloke proposes in the background.

Inside the billionaire Getty dynasty wrecked by booze, addiction, suicide and kidnapping

£700million seam of the gold is discovered in Snowdonia, Wales