Home » Fashion » What makes a top hatter mad? Tiaras and fascinators at the Melbourne Cup 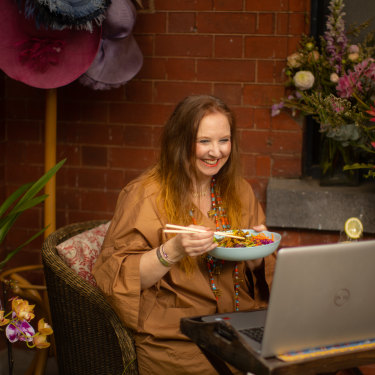 Milliner Melissa Jackson would rather be working than having lunch in the lead up to the Melbourne Cup.Credit:Simon Schluter

At the beginning of lunch, milliner Melissa Jackson makes it clear that she would prefer not to be here. This is not a case of bad manners. Jackson is excessively polite, with an upbeat personality inevitably described as bubbly and vivacious – the type of person who apologises when you bump into them with a full glass of champagne at Flemington Racecourse. It’s not personal. This palpable and uncharacteristic disappointment is purely business. 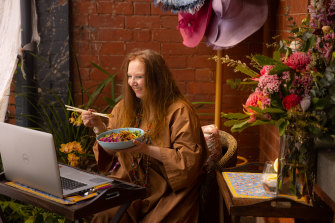 Milliner Melissa Jackson eats lunch on the verandah of her Richmond terrace.Credit:Simon Schluter

“Normally right now I would be working day to night, trying to finish bespoke orders for my clients,” Jackson says. “I would have bags under my eyes, down to my nose, threatening to drag along the floor. The Melbourne Cup Carnival is the biggest time of year for milliners. It’s our bread and butter. Well, it was.”

Jackson is installed on the verandah of her Richmond terrace, making the most of some precious spring sunshine, instead of being surrounded by straw, feathers and hat blocks. With Melbourne’s lockdown having cancelled attendance at the Caulfield Cup and Derby Day, Jackson regrettably has plenty of time for our Zoom lunch. Our conversation takes place days before the Victoria Racing Committee’s decision to allow 10,000 spectators on Cup Day. 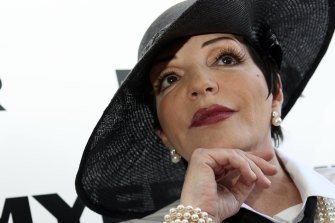 “This is certainly the biggest pause I’ve experienced professionally since starting my business. Last year was a massive pause. I was still dressing a few people, but it wasn’t my regular bespoke clients. Normally, I would be creating somewhere between 40 and 70 bespoke headpieces. Now it’s… well, it’s dumplings for lunch.”

When the prospect of crowds being allowed to Cup Day comes up in conversation the lament continues. “It’s just not enough time. For my customers part of the experience of ordering a hat is the process. I used to make a range of hats for people to pick from, but today people want to be involved. This is the new luxury. Everyone wants something unique.”

Having ordered from Vietnamese restaurant Misschu’s Tuckshop in nearby South Yarra, with a selection of dumplings and a turmeric chicken slaw salad, the hands-on creator assembles her meal at the table like an artwork. All of that pent-up creative energy has to go somewhere.

Meanwhile, on the other end of our Zoom chat, I have inconveniently timed our lunch with a harrowing juice cleanse. While listening to Jackson’s effusive admiration for the steaming ginger dumplings, I’m sipping a Spicy Lemonade from Lucky You with the only artistic addition a metal straw. This might be another reason why she would prefer to be making hats.

“I don’t think people understand what we have been through as an industry,” she says. “It’s not just COVID-19. Before that, there were the fascinators, headbands and the crowns. I am known for big, proper wide-brimmed hats. It’s the crowns that got me. Unless you’re an actual princess or six years old, why would you want to wear one?” 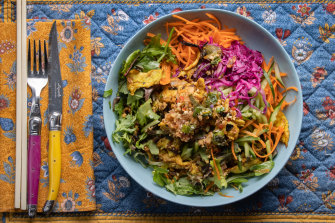 Having created hats for Princess Anne’s equestrian daughter Zara Phillips, Hollywood royalty Liza Minnelli and supermodel Coco Rocha, and with pieces in the National Gallery of Victoria’s collection, Jackson is entitled to be upset with potential customers choosing to be princesses for a day in flimsy diamanté tiaras. It’s part of an overall disappointment with the lack of respect for the work involved in making a professional headpiece and the arduous journey to becoming a milliner, although she admittedly took the outside run.

Jackson is entitled to be upset with potential customers choosing to be princesses for a day in flimsy diamanté tiaras.

The only one of acclaimed architect Daryl Jackson and his wife Kay’s four children deaf to the call of a building site, Jackson describes herself as the black sheep of the family. Her father is responsible for such influential projects as the Harold Holt Memorial Swimming Pool, the $150 million redevelopment of the MCG’s Great Southern Stand in 1992 and the Olivia Newton-John Cancer Wellness and Research Centre. While brother Timothy and sister Sara became architects, with sister Olivia pursuing interior design, Melissa took after her grandmother Doreen “Mardi” Jackson.

“My grandmother did many things, millinery being one of them. She was the eternal optimist. Because she was brought up in the Depression era, she used to make everything from anything. Dad would give her these beautiful scarves, and she would make it into a bag,” she says. “She covered couches and made dolls with anything she could get her hands on. I’m pretty sure there’s a lot of her DNA in me.”

Beyond DNA, Doreen took a hands-on role, overseeing the creation of a collection of six hats for Jackson’s final-year art project at Wesley College. Success in Year 10 with a seagull hat with wings that made the wearer resemble Sally Field in The Flying Nun supported their case when making the unconventional arrangement with school staff.

Rather than dive straight into millinery following secondary school, Jackson pursued a textile degree at RMIT, before taking that outside track again and studying opera singing at the Melbourne Conservatorium of Music. “I decided Kiri Te Kanawa wasn’t quite my path, and then I diverted again and was accepted into Central Saint Martins, half-way through a course.” 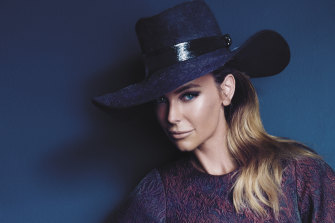 “I wasn’t there with any stars unfortunately. Stella [McCartney] had finished a couple of years ahead. The teaching there is pretty much that you’re left to sink or swim. There’s not a lot of nurturing. It’s all about toughing it out because that’s what’s going to make you a great designer. It prepares you for moments like this. But there were some great trips, like to Paris Fashion Week.”

Performance training at The Melbourne Conservatorium of Music paid off when Jackson talked her way into a Jean Paul Gaultier show in Paris, masquerading as an American journalist.

“I was also thrown out of an Alexander McQueen for Givenchy show at an abattoir on the outskirts of Paris by a bouncer and climbed scaffolding in The Trocadero to see a John Galliano show for Dior. It was amazing.”

No bouncer was required to eject Jackson from London, with the pull of family and desire to start her millinery business proving stronger than surviving another bleak winter. Someone in Australia advised her to stay put and enjoy the appreciation of a sophisticated European clientele for headwear. “I didn’t listen, but they were probably right.” 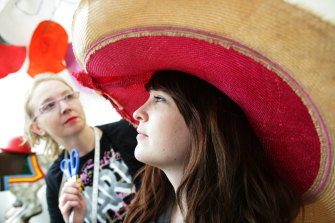 Making the final adjustments to a hat in more buoyant times, before the Melbourne Cup.Credit:Jessica Hromas

We have come to the dessert stage of proceedings, which for Jackson is a tapioca pot with chocolate sauce and coconut, while I have a few sips of Spicy Lemonade left at the bottom of my bottle.

Since returning to Australia in 1998, there have been the highs of dressing celebrities, opening her charming streetfront studio on Fitzroy’s Gertrude Street, helping revitalise the once challenging retail strip and immersing herself in teaching within the TAFE sector.

Unlike their counterparts in Britain, such as Stephen Jones and Philip Treacy, who create bespoke pieces for royalty and racegoers while working for brands such as Valentino, Dior and Balenciaga, Jackson says milliners are given a raw deal by the Australian fashion community.

That attitude might finally be shifting, with Jackson tapped by designer Kit Willow to create pieces for her Kitx show at Australian Fashion Week. The upcycled denim pieces elevated proceedings and perfectly tapped into Willow’s focus on sustainability.

“I knew Kit from Melbourne in 1998-1999, when my first client was the revamped Georges and at that time Willow was working PR. When she asked me, I thought, let’s give it a crack. I felt like my grandmother, pulling pieces together from forgotten scraps.” 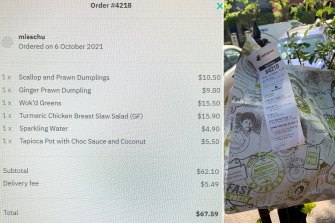 The receipt for lunch with Melissa Jackson from Misschu, Richmond.

Jackson has found balance to her magpie creativity with husband Michael DeGrieve, who works in IT security. They have been married since 2006. Asked what Michael makes of her creativity she responds that he doesn’t quite understand, only to be stopped by a rap on the window. “I love it,” he says from inside their home.

“Because he is in IT security all of his work is in one computer,” says Jackson. “I have quite a few things in my nest. We are quite different but it works. He doesn’t like to go to the races.”

At the races Jackson is most comfortable away from the marquees, watching the horses; she took up the equestrian sport of Eventing in her childhood, under the watchful eye of a mother who bred ponies. Despite being social, she has avoided the traps of leaning into the mad hatter stereotype and building a business by copying the work of others.

“There aren’t many true designers. There are plenty of people who jump on and off trends, but I tend to follow my own beat,” she says. “I’m hopeful that business will return and that it will return to hats.”

With bespoke hats starting at $450 and rarely costing more than $800, Jackson defends the value of the process and materials, rather than ordering a mass-produced item online. 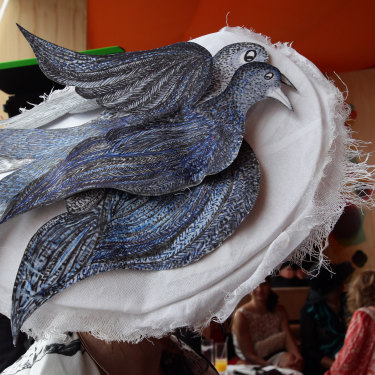 Millinery in full flight. Jackson wearing one of her creations in the birdcage at the 2010 Melbourne Cup.Credit:Angela Wylie

TV, movies, Find out the next TV, streaming series and movies to add to your must-sees. Get The Watchlist delivered every Thursday.

‘Apple’s funding more than the government’: Every 10th game on Arcade is local