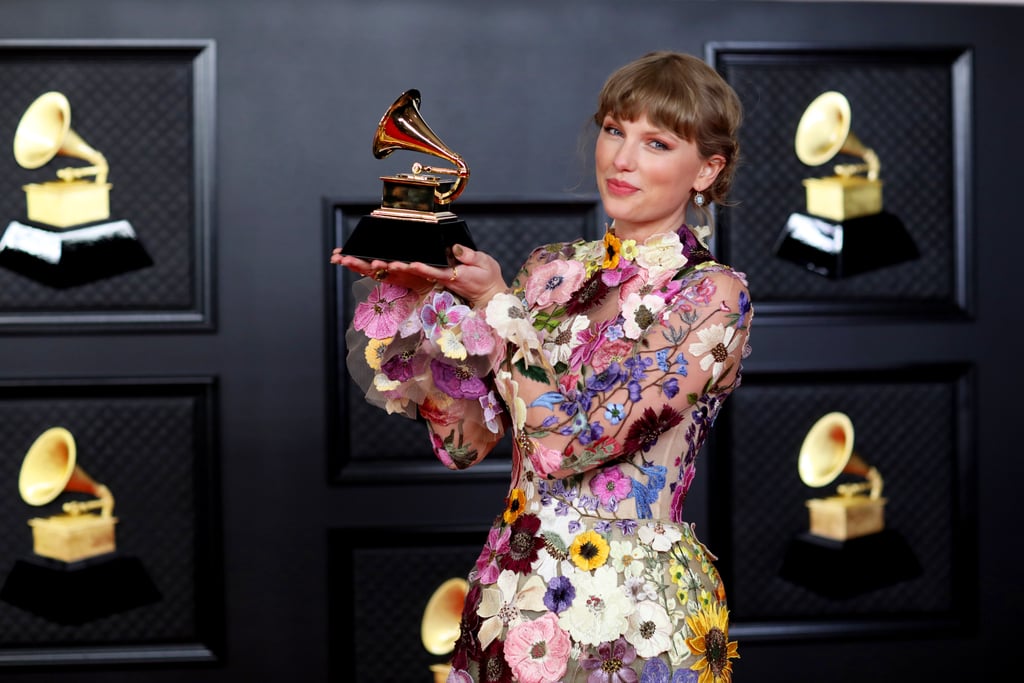 Short of breaking out a 3D printer, designer and TikTok star Sarah Hambly created her own nearly identical copy of Taylor Swift’s dress at the 2021 Grammy Awards, and the attention to detail is remarkable. The Oscar de la Renta minidress was made with beige organza covered in floral appliqués and featured a high neckline and bell sleeves that gave it a ’70s-inspired vibe. With a lot of thread and one resilient sewing machine, Sarah spent the next three weeks recreating the dress from scratch, and the finished result is a spring masterpiece.

Using a mesh fabric that she dyed nude and coated with a water soluble stabilizer — to prevent any tears like the seam Taylor ripped under her right arm on Grammys night — Sarah set to work with her embroidery machine. “I just sat here and counted stitches and changed thread, changed needles, and just worked with that,” she told POPSUGAR. “I definitely didn’t have any of the florals that she has on hers. I printed out pictures of her and put them next to the machine so I could try and get colors close, but you can’t do identical. It’s one of one.”

Halfway through the sleeves, Sarah’s embroidery machine malfunctioned, ruining the alignment and forcing her to start over, but the finished result was well worth it for the flawless recreation. “It’s probably close to $1,200 in thread alone,” she said. “And then the fabric and dying was less than a hundred bucks. Then the labor for sitting here for three weeks, every single day, 12 hours a day would probably put it around the same price as the dress, about $9,000 in work.” Just like Taylor, Sarah even paired the final look — which she plans to rock at her family’s Memorial Day barbecue — with a handmade floral face mask.

Sarah’s first big project was a Hannibal-inspired look at Her Universe Fashion Show at San Diego Comic-Con in 2016, when she first started sewing. Between January 2020 and December 2020, she completed 113 dresses. “You get bored in quarantine really quick,” she said. Today, she is known for her zodiac sign-inspired dresses, signature princess-style gowns (yes, there’s a strawberry dress), and her recreation of Ariana Grande gray Giambattista Valli dress at the 2020 Grammy Awards, which earned her a casual 30 million views overnight. “All that tulle was really hard to work with,” Sarah said, adding that she worked 14-hour days for a week straight to complete the look.

To make room in her closet, Sarah often recycles her completed looks into new products or sells them on Depop. “[My followers] think it’s really neat, a lot of people have asked to buy it,” she said of the Oscar de la Renta remake. “Some people have asked how to make it, and then I’ve walked a few people through learning about embroidering machines and what’s a good price range, what’s a good machine, and a lot of people have wanted to make it.”

As she waits for another celebrity style moment worth duplicating to pop up, Sarah — who teased a possible collaboration with Netflix — plans to work on her first official clothing line, set to debut in May or June 2021. “I’ve been dreaming about it forever, but definitely having a social media presence has been able to bring it to life, so I’m really excited about that,” she said. Take a look at her handmade Taylor Swift and Ariana Grande Grammys dresses ahead.

Donald Trump election speech: When is the president expected to address the nation tonight?

Middle East on the brink: US’ ‘act of terrorism’ was ‘rogue adventurism’ – Iran to Trump

Are Sarah Hyland & Wells Adams Postponing Their Wedding? They Gave An Update