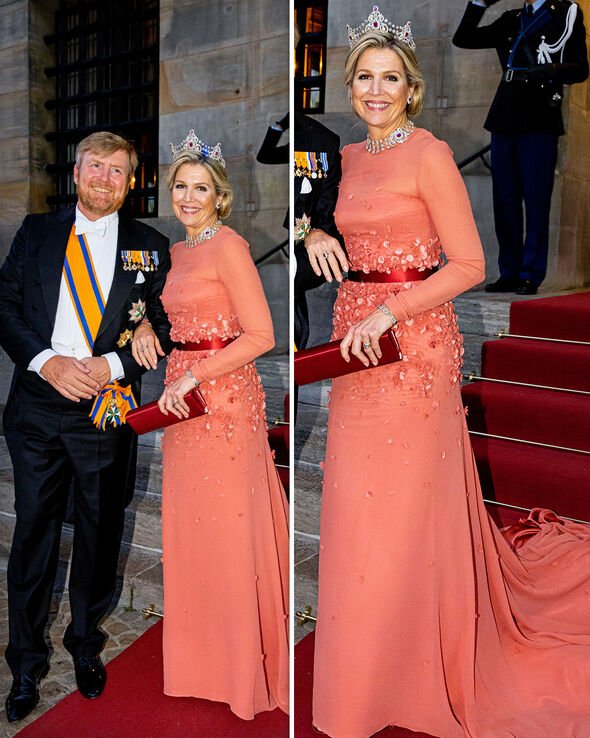 Queen Maxima of the Netherlands and her husband King Willem-Alexander were all smiles while posing for the cameras outside the Royal Palace in Amsterdam. Queen Maxima wore a stunning coral floor-length gown which she had previously worn in 2009 and 2012.

She chose the Jantaminiau dress which featured long sleeves, an embroidered detail around the waist and a red silky belt.

The Dutch monarch looked stunning in the gown which she combined with a red clutch bag and matching stilettos.

Queen Maxima chose some gorgeous pieces of jewellery to accessorise the look, including the Ruby Parure Tiara.

The Ruby Parure Tiara was made by Mellerio Joaillier, a french jewellery firm and the “oldest house of high jewellery in the world since 1613,” as its website states. 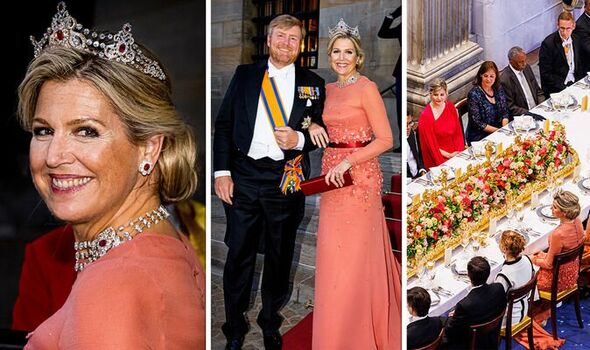 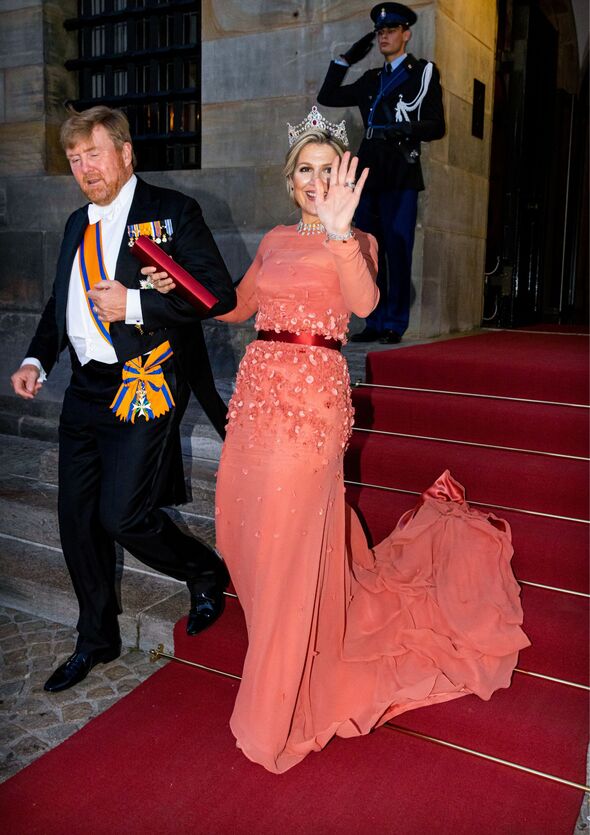 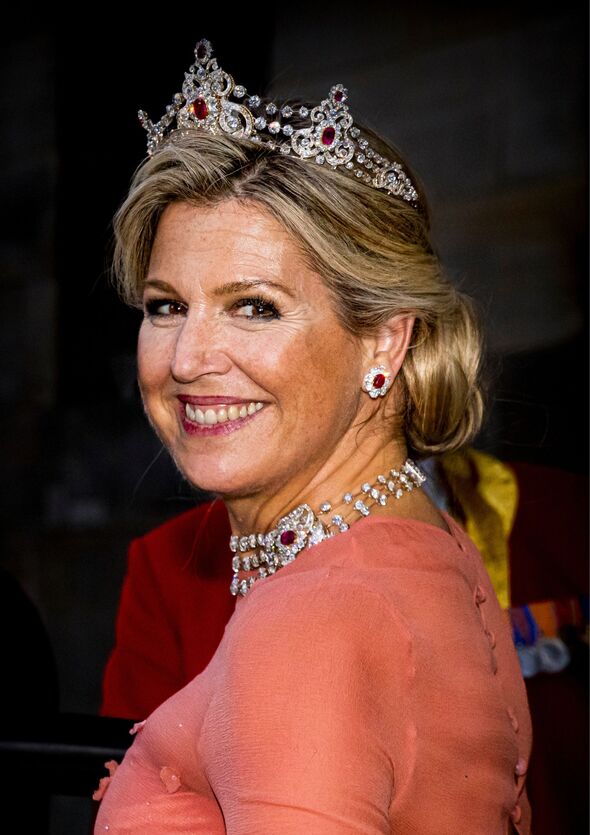 The Dutch ruby tiara was designed in 1888 for Queen Emma and was a gift from Emma’s husband, King Willem III.

The diadem, which has a very classic tiara shape and design with rows of diamonds between the larger elements, has been worn by many Dutch monarchs until it was passed to Queen Maxima by her mother-in-law, Queen Beatrix.

“All four Dutch queens since Queen Emma have worn the tiara which is classic in style.”

Queen Maxima chose to don this tiara for her first official portrait as Queen in 2013.

She also wore the piece at the wedding of Prince Carl Philip of Sweden and Princess Sofia in 2015.

Eddie added: “Rubies have long been highly prized precious gemstones – ancient Sanskrit referred to the ruby as the king of precious stones, the bible describes wise and virtuous women as more precious than rubies and the Persian sage al-Biruni wrote that rubies rank first in terms of colour and beauty among all gems in existence.”

For the Diplomatic Corps gala dinner, the Dutch monarch was also seen donning other pieces of jewellery, including an impressive diamond and ruby necklace and matching diamond and ruby earrings. 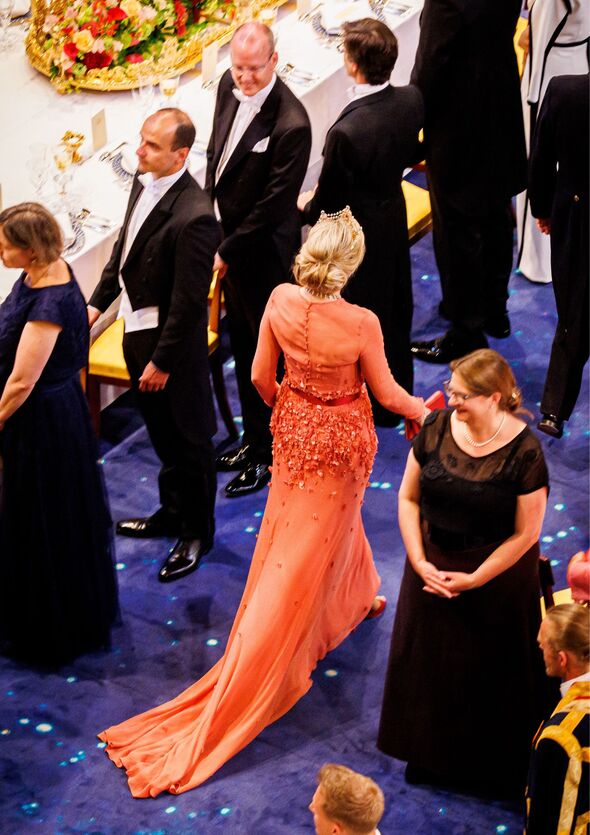 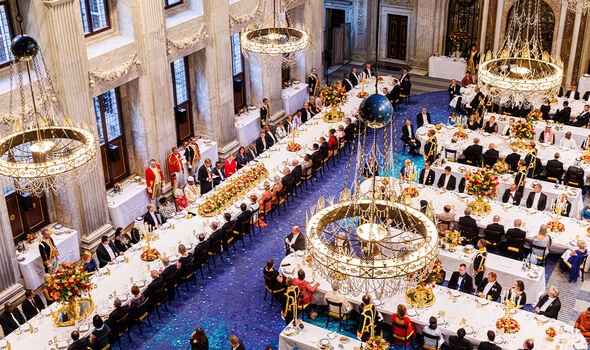 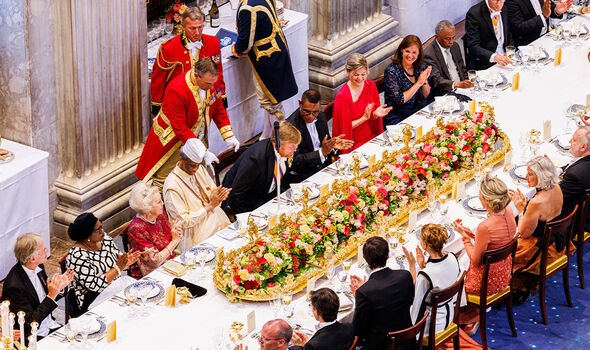 A diamond bracelet was also spotted on her left wrist.

“I liked it better in 2012 but the hair up seems more suited for this event.”

Another one, @heidimariescott, agreed: “Ooh pretty dress! But again I like the whole outfit better when her hair was down in 2012.

“She’s so beautiful though so I’m just quibbling.”

Who is the Girl with the Pimple and Spiders in 'Scary Stories to Tell in the Dark'?