Baffled sock owners have been claiming their tumble dryer gobbles odd socks for years, but it's been dismissed as a popular urban myth. 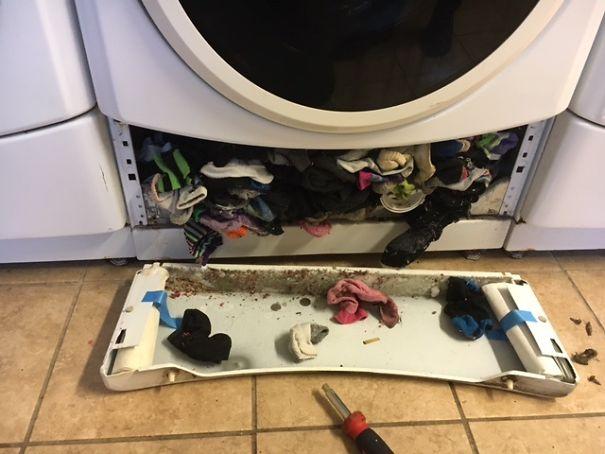 But, if your appliance has a panel at the bottom, you may be about to be proven right.

Taking to Bored Panda, property manager Cathy Hinz revealed her husband had taken apart a washer dryer which wasn't working properly in the laundry room of one their blocks of flats.

He started with the bottom panel, which was absolutely stuffed full of odd socks – and even a credit card.

Cathy wrote: "To his shock, this is what he found. Socks, underwear, a credit card… and that is just what was in the bottom of the machine. 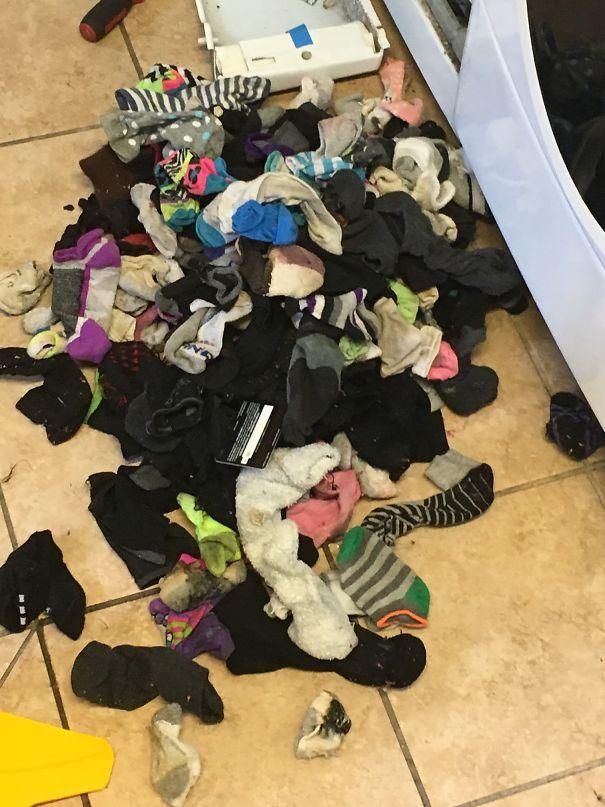 "When he removed the water pump that removes the water from the machine, he found about $7.00 (£5) in change.

"Now, for those of you that SWEAR, your machine eats your small things, and have been told by 'professionals' and others that this fable just is not true… Here is the proof!

"So next time you are missing socks, just remember! That washing machine might just be hungry!"

Sarah Rose tweeted the story last week and people are delighted to have finally been proven right, with the tweet racking up more than 72,500 likes and 25,200 retweets.

She joked: "soooo, I no longer feel like a crazy person for losing random socks…"

Another commenter, Matthew Live, revealed there's also often a duct which comes off the back of your tumble dryer, which looks like "white, large, Slinky-like tube".

He added: "Comes off and on incredibly easily. Socks, stuff from your pockets, etc. Cleaning it will dry your clothes faster, too."

The revelation has sent people into a frenzy. In response, Tamala Sigrist tweeted: "OMG!! That’s where they all go! I knew it!!!"

While TBarth joked: "You’ve found the portal to the Land of Lost Left Socks".

Essex mum Danielle Carr, who's the partner of Towie's Kirk Norcross, previously sent people into a similar frenzy when she unveiled a similar secret compartment and revealed her dryer had been eating socks.

In more life hacks, here's how to clean your BBQ is less than five minutes.

And this is why chopping onions makes you cry – and how to stop it happening.

16 Thanksgiving Sides to Make You Forget About the Turkey