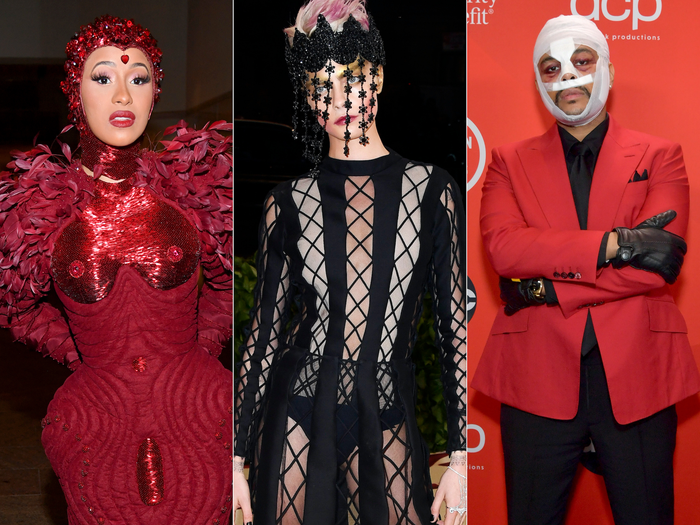 Lady Gaga arrived on the red carpet at the 2011 Grammys in a giant egg that made her appearance look like an actual piece of art. 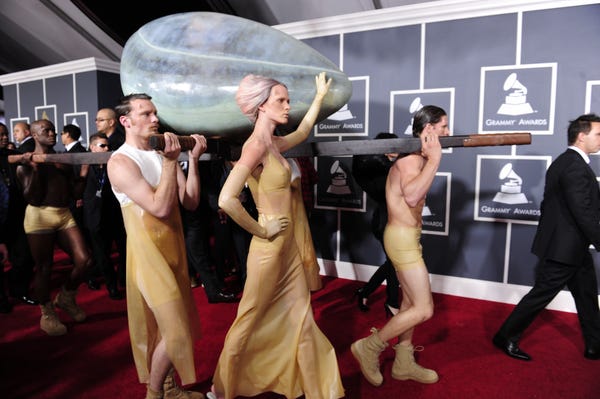 At the 53rd annual Grammy Awards, Gaga arrived enclosed in a large egg sculpture while a group of four people carried her across the red carpet.

The singer later emerged from the egg when she took to the stage to debut her 2011 single "Born This Way."

Katy Perry wore a red veil that covered her face at the 2017 Met Gala. 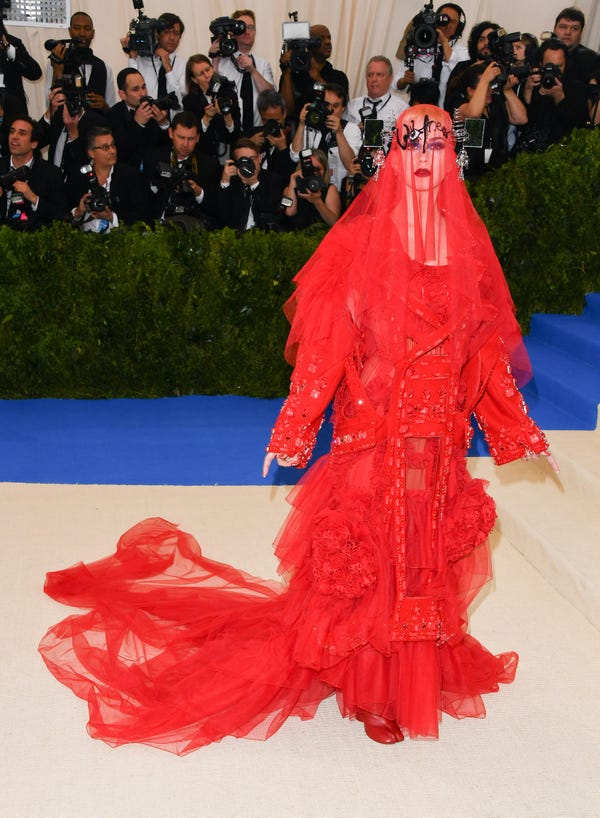 Perry was the Met Gala co-chair in 2017, and she showed up in a jaw-dropping ensemble.

The singer wore a Maison Margiela Artisanal outfit that was custom-designed by John Galliano. Aside from the transparent veil and headdress, Perry was covered in layers of satin ribbon, tulle, and chiffon.

Lily Collins looked like a completely different person in a short black wig at the 2017 Met Gala. 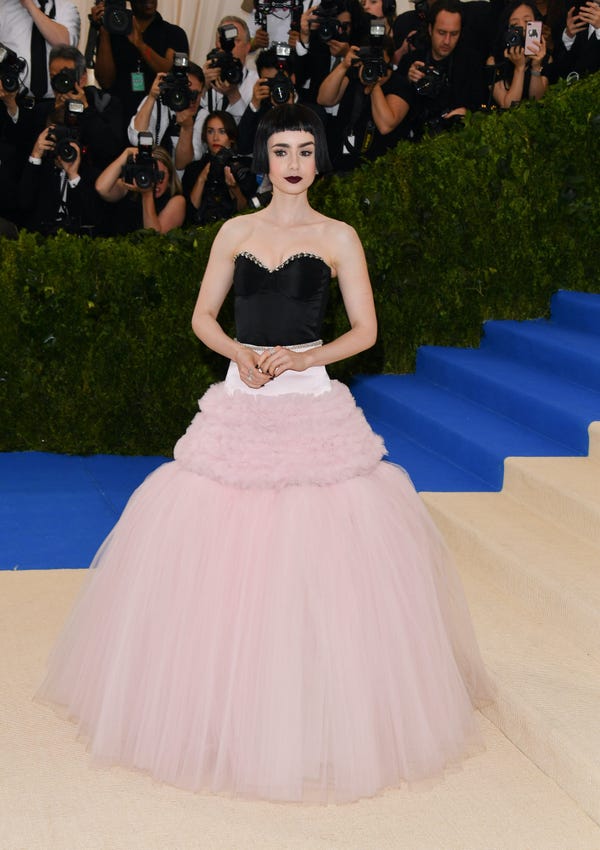 The black wig was a departure from Collins' usual long brown hair. The actress looked like a goth princess in a Giambattista Vali gown designed with a black corset top and dramatic pink tulle skirt. 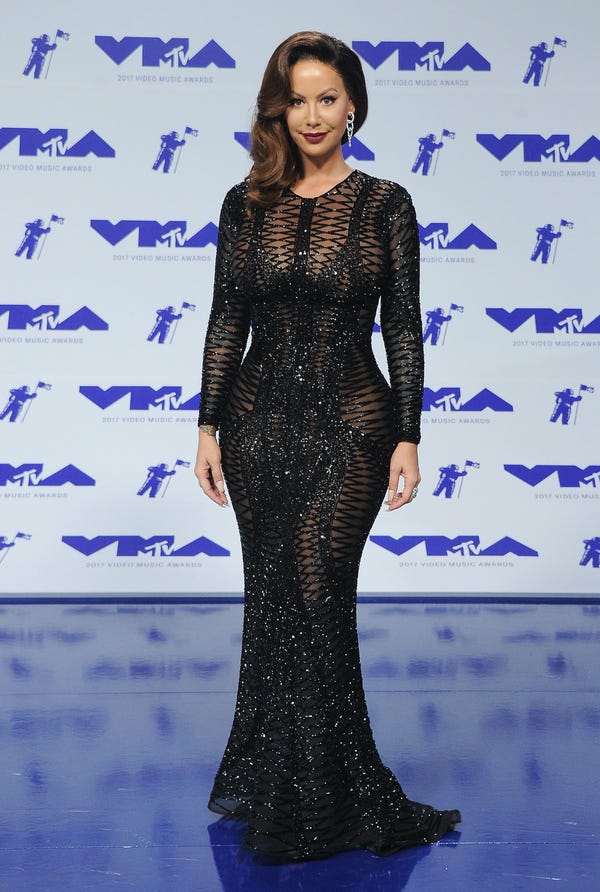 Amber Rose covered up her usual platinum buzz cut with a long brown wig at the MTV Video Music Awards. She was photographed on the red carpet wearing a Yousef Alijasmi gown with a dark-red lip.

Allison Williams turned heads when she arrived at the 2017 Met Gala with blonde locks instead of her usual brown hair. 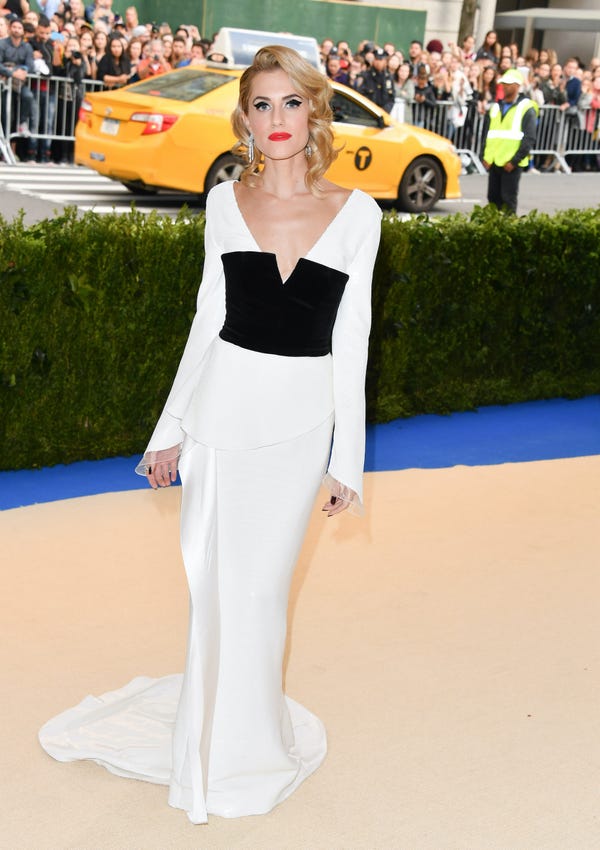 Williams went for an over-the-top look in a Diane von Furstenberg dress with blonde hair, a dramatic cat eye, and a bold red lip. 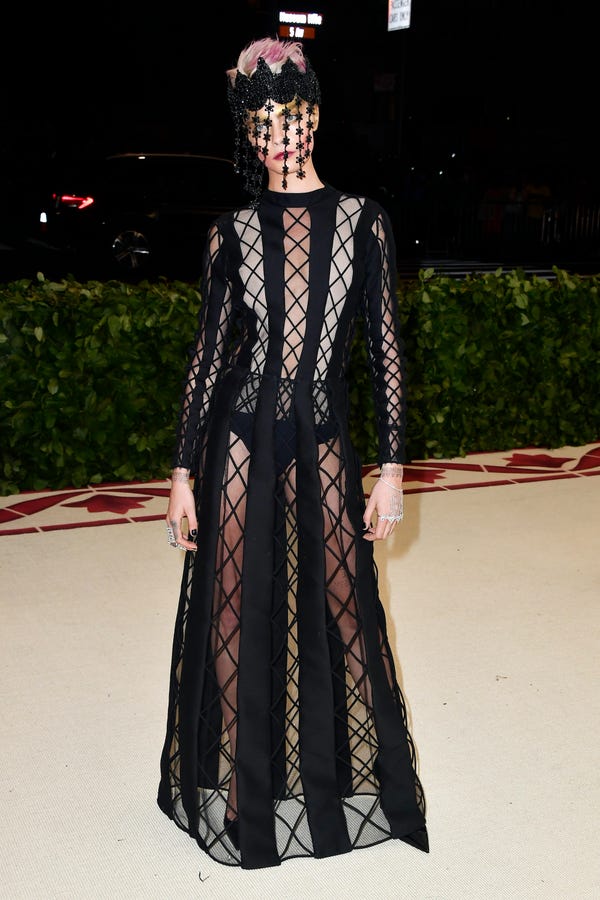 The supermodel and actress left little to the imagination when she arrived at the 2018 Met Gala in an all-black Dior Haute Couture dress. However, Delevingne kept her face covered by wearing a beaded Dior crown complete with a matching veil.

Zendaya sported a new hairstyle at the 2018 Met Gala. 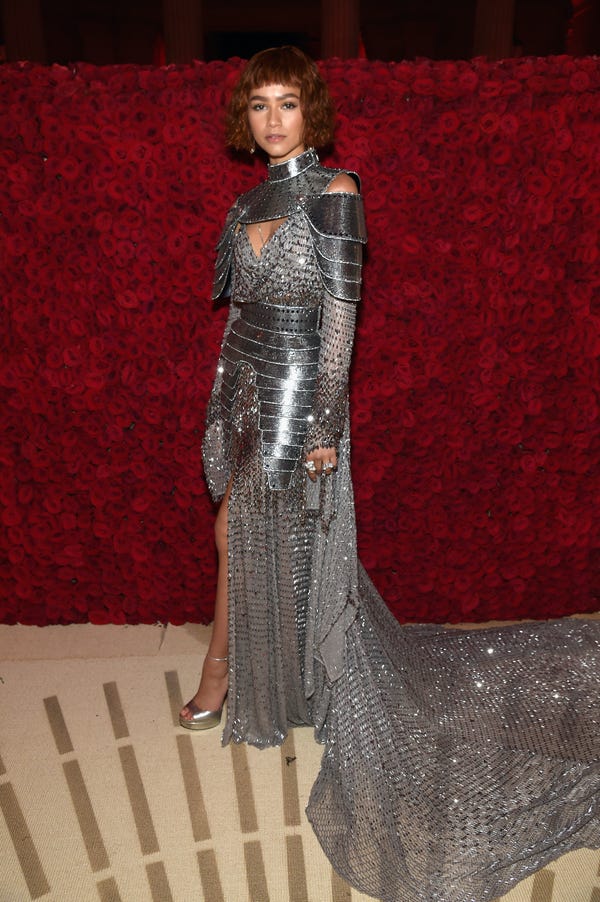 The Emmy Award-winning actress embraced the Met Gala's "Heavenly Bodies: Fashion and the Catholic Imagination" theme by dressing in a Joan of Arc-inspired outfit. For the event, Zendaya wore a custom Versace dress complete with chainmail, a spiked belt, and a train.

She also traded in her long locks for a chin-length bob with bangs.

Billy Porter stole the show when he wore a "Sun God" ensemble to the 2019 Met Gala. 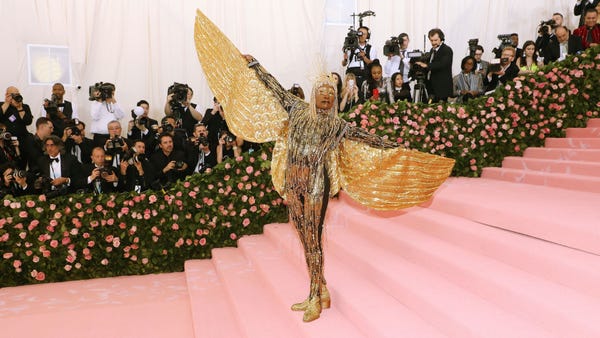 The actor attended the annual event in a look designed by The Blonds. His outfit consisted of a golden pantsuit, 10-foot wings, a 24-carat gold headpiece, and custom gold-leaf shoes.

Porter told Vogue the look was inspired by Diana Ross, Elizabeth Taylor in "Cleopatra," and Cher.

Cardi B stood out at the 2019 Met Gala in a custom Thom Browne gown that featured a 10-foot long train. 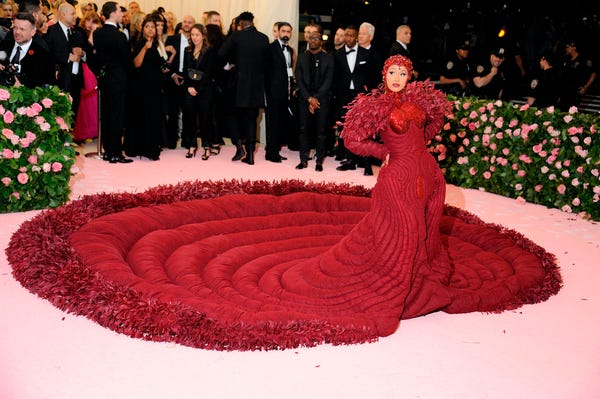 Cardi B covered herself head to toe in the massive tulle and silk organza gown. According to Vogue, the dress took 35 people and more than 2,000 hours to create.

"I designed this dress for Cardi specifically because she has the ultimate beauty in a woman's body, and that is what the dress is about for me: taking advantage of that beauty," Browne told Vogue.

Kacey Musgraves was a real-life Barbie at the 2019 Met Gala. 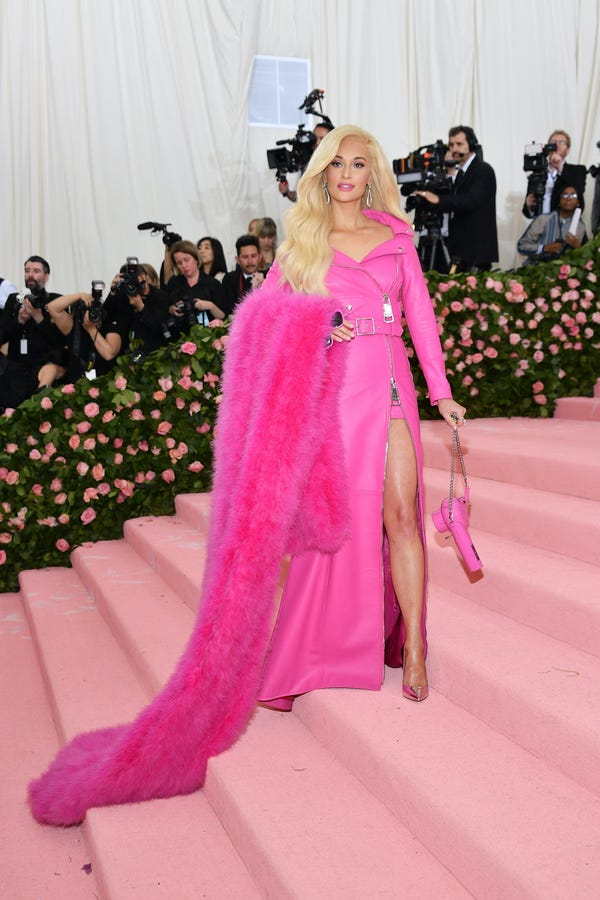 The singer followed the "Camp" theme of the event by wearing a pink Moschino dress with Forevermark diamonds and $80 shoes from Aldo. The flowing blonde wig made her look like a completely different person.

Kris Jenner traded in her usual monochromatic looks for a daring jumpsuit at the 2019 Met Gala.

Jenner paired the jumpsuit with a floor-length, tulle coat designed by Tommy Hilfiger. She also left her signature short black hair behind and wore a blonde bob instead.

Billy Porter wore a motorized fringe hat that covered his face to the 2020 Grammys. 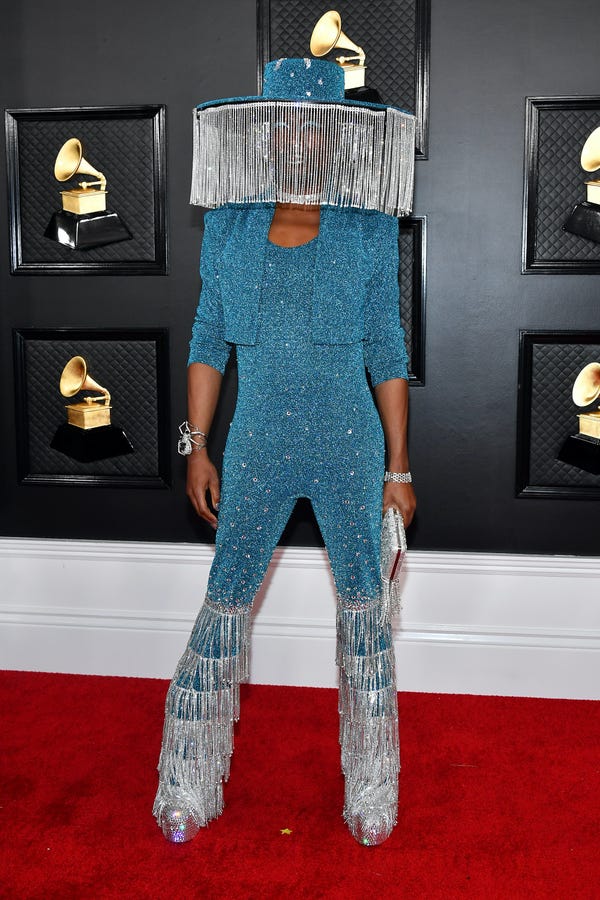 Porter wore a turquoise Baja East jumpsuit with a matching hat. The hat was designed with a motorized row of crystals that made it possible for the fringe to move away from his face.

His stylist, Sam Ratelle, told Vanity Fair that the red-carpet look was inspired by the beekeeper-style bonnet Billie Eilish wore to the 2019 American Music Awards.

The Weeknd was heavily bandaged at the 2020 American Music Awards. 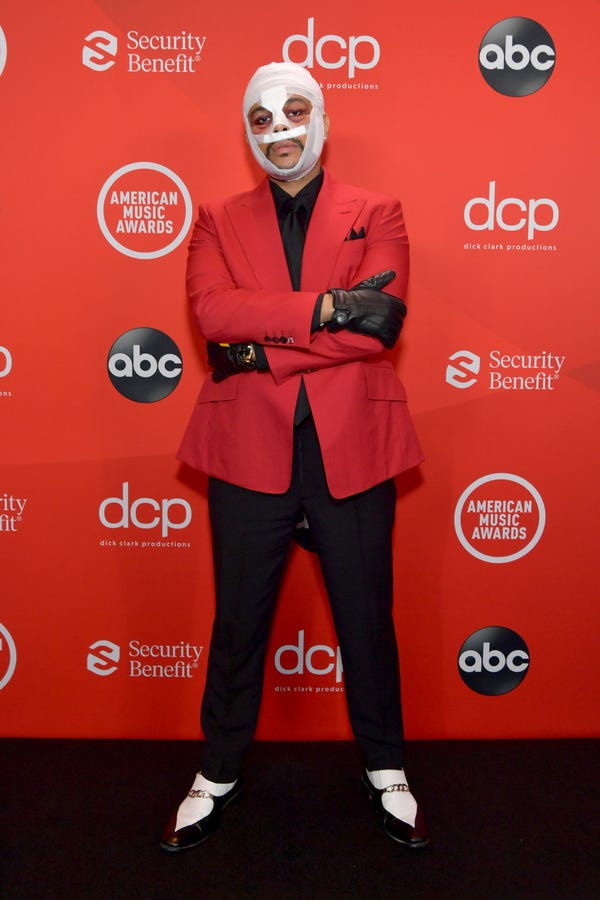 The look is a recurring aesthetic of The Weeknd's "After Hours" era, which he has referred to as "The Character."

The singer has remained in character for all live performances, and the bruises and bandages have progressed with each one. He rocked his most dramatic look yet at the 2020 AMAs.

Nvidia And Epic Team Up For GeForce ‘Fortnite’ Bundle