Two brothers and a woman have been arrested in connection with the “massacre” of three best friends who set out on a fishing trip at a central Florida lake last week, Polk County Sheriff Grady Judd said Wednesday. One of the suspects, Tony “TJ” Wiggins, 26, had previously been charged with 230 felonies, and had been consistently arrested since he was 12, Judd said.

“He’s the kind of guy who would punch you in the face for no reason,” the sheriff said.

His brother William Robert Wiggins, 21, and girlfriend Mary Whittemore, 27, were also arrested. The three suspects are scheduled to have their first court appearances at 1 p.m. on Thursday, CBS affiliate WTSP reports. 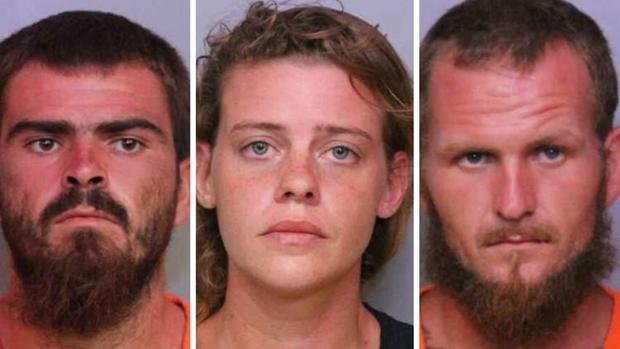 Investigators interviewed all three suspects and said their stories were “inconsistent and contradicting.” Neither Tony Wiggins nor Mary Whittemore are cooperating with detectives, police said.

They are accused in the shooting and beating deaths of Damion Tillman, 23; Keven Springfield, 30; and Brandon Rollins, 27; on Friday night as they gathered at a remote boat ramp at Lake Streety near Frostproof.

Judd, who has worked at the agency since 1972 called the crime scene “horrific,” describing the deaths as a “massacre.” He said the men were beaten and “shot up.”

“I’ve been to a lot of murder scenes in my life, and this ranks among the worst,” Judd said during a Saturday news conference.

According to the sheriff, Tillman was at a Dollar General store in the area and mentioned he was meeting his friends to go fishing at the lake. The store clerk later told investigators the suspects were in the store and overheard Tillman saying he was meeting up with his friends.

Judd said Tony Wiggins told his brother to drive to the lake. Once there, Tony Wiggins confronted Springfield, accusing him of stealing his truck and selling the engine. Judd said investigators have not yet determined whether that allegation is true.

The brother told detectives Tony Wiggins shot all three victims, then asked him to help put Tillman in the back of a truck.

The sheriff said the trio then went to a McDonald’s and ordered 10 double cheeseburgers and two chicken sandwiches.

Rollins was still alive when the attackers left, Judd said. He called his father for help. The father arrived about 10 minutes later but forget his cellphone in a rush to help his son, so he went to a convenience store to get help.

By the time help arrived, his son had died.

Detectives received tips about the case and obtained video from the store. During a search warrant at the suspects’ homes, investigators found a gun that killed the victims, Judd said.

Tony Wiggins is charged with first-degree murder, tampering with evidence and possession of a firearm by a convicted felon. His bother and girlfriend are each charged with accessory after the fact. All three were expected to appear before a judge Thursday afternoon. Attorneys for them were not listed on court records.

Earlier, Judd had announced a reward of $30,000 leading to arrests in the case.

SARAH RAINEY sent some of her store cupboard antiques for analysis