AM talk radio stations 2GB and ABC Sydney have seen their audience shares surge to record numbers in the latest Sydney radio ratings.

2GB (part of Nine, which also owns this masthead) saw its overall audience share increase to 16.4 per cent (up 1.2 percentage points). That station said the result was its highest ratings since 2004. 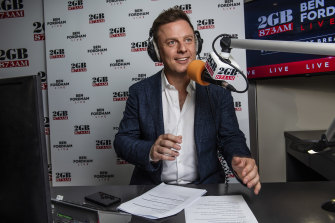 It retains its lead as Sydney’s top station, ahead of ABC Sydney whose audience share also increased to 13 per cent (up 1.1 percentage points), its best ratings since 2010.

The stations’ success was driven by their respective breakfast shows, with 2GB’s Ben Fordham extending his lead in the slot to an 18.8 per cent audience share (up 2.0 percentage points), his best result since he took over the gig from Alan Jones in June 2020.

ABC Sydney’s Wendy Harmer and Robbie Buck – who last week announced they were ending their show at the end of the year – also experienced their best result since 2010, extending their audience share to 15.7 per cent (up 1.7 percentage points).

“It’s been a tough few months for Sydney… but the audience knows 2GB is the source of trusted news and opinion. We’re proudly live and local and that’s seen a big jump in audience across the network.“

Thursday’s radio ratings, the sixth survey of the year, covered the period July 11 to September 18.