Revealed: How a US university degree has become a status symbol for well-heeled Brits, with public schools reporting a ‘surge’ in applications (and the stars and socialites who’ve led the way)

For decades, the great and good of British society have flocked to the hallowed halls of Oxford, Cambridge, and other Russell Group universities to continue their education.

However now an increasing number of well-heeled school pupils are opting to continue their studies across the pond, according to Tatler magazine.

An informal survey conducted by the publication in conjunction with its annual Schools Guide – a must-buy for any parent looking to send their offspring to an elite institution – found there has been a ‘surge’ in applications to US universities.

‘Almost all of the main public schools report a significant increase in both applications to US universities and pupils accepting places at them,’ the society bible explained.

‘The majority contacted now have at least a quarter of pupils applying to the US and/or Canada, with Brighton College seeing a 10- to 15-fold increase over the past four years.’

As with most areas of life, society beauties, royalty and celebrity offspring have been ahead of the curve when it comes to choosing a US university, finding themselves drawn by benefits including more contact hours, greater course flexibility and amazing campuses.

Society beauties going Stateside: Lady Gabriella Windsor (left) graduated with a degree from Brown, while Lady Violet Manners (right) has embarked on a course at UCLA 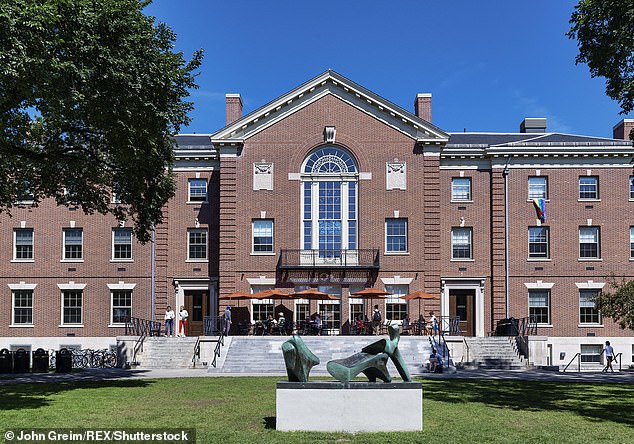 Best of the best: Lady Gabriella Windsor was educated at two UK schools before accepting a place at Brown, pictured. Undergraduate tuition fees at Brown are $57,112 (£46,200) a year 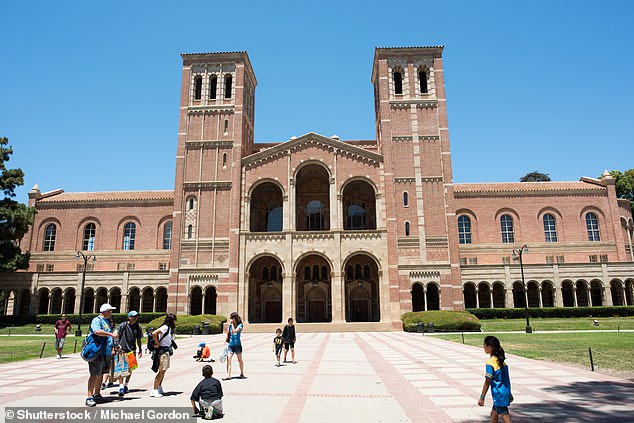 Sunnier climes: Lady Violet Manners announced that she would spend a year at UCLA, pictured. Undergraduate tuition fees for international students are $45,999 (£37,000) a year

It also helps, of course, that they can afford the extortionate fees which are prohibitive for many.

Lady Gabriella Windsor, the recently married daughter of the Duke and Duchess of Kent, was educated at two esteemed British institutions – Queen’s Gate School in London and Downe House School in Cold Ash, Berkshire – before accepting a place at Brown. She graduated in 2004 with a degree in Comparative Literature.

A string of celebrity offspring who have spent their time in both the US and the UK have ultimately chosen the US for their studies.

Among them is Brooklyn Beckham, who enrolled at NYU before dropping out last summer after a year.

More recently, Lady Violet Manners, daughter of the Duke and Duchess of Rutland, announced she would be studying for a qualification in Business and Marketing at UCLA.

Commenting on the rise in popularity, Sharon Walpole, Director of www.careermap.co.uk, noted a variety of factors could make US universities seem more appealing to ambitious British students.

Change of plans: Another Brit tempted by the excitement of an American university was Brooklyn Beckham (left), who accepted a place at NYU (right) but dropped out after a year.

Cost of education: The difference between British and US tuition fees

This increases significantly if you are an international student.

Fees: The tuition fees for US colleges and universities vary greatly.

‘Many young people understand that studying outside the UK is a unique experience. It gives the chance to see other parts of the world, make friends and really immerse themselves in another culture,’ she said.

‘This is personally rewarding, but also looks great on a CV and impresses employers. It takes confidence and independence to break the norm, especially going to a country where the culture and language may be completely different.’

Not only that, but she said the US no longer feels as far away as it once did, making it even more appealing to British students worried about leaving home.

She continued: ‘Going to the US is not as far as it used to be; with the world shrinking and life online, the distance and separation is not so great.

‘The US is large country with lots of regional differences. This means students can shop around to find a place that matches their personality, whether that is an Ivy League (like Harvard or Yale), a small rural college or one near a beach in California.’

Undergraduate degrees at US universities are also typically structured in such a way that allows a student to take classes across a number of disciplines before choosing their major, leaving options open for longer.

The main downside is, unsurprisingly, the cost, which can reach an eye-watering $60,000 (£48,500) per year for an Ivy League institution like Harvard. 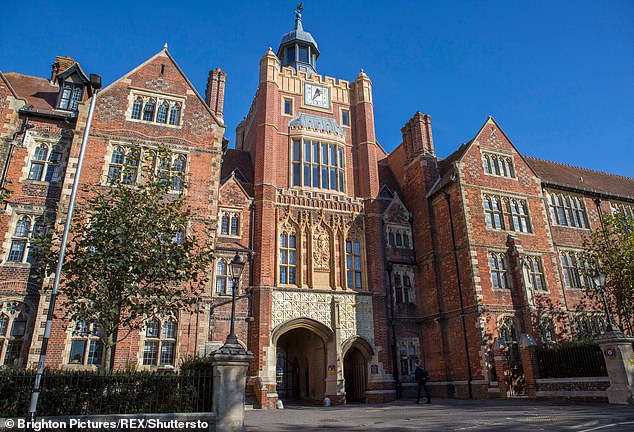 Leading the way: The high achieving Brighton College, pictured, reported seeing a 10- to 15-fold increase in the number of students applying to US universities over the past four years

While this remains far higher than British universities, the rise in fees in the UK does make them more competitive ‘particularly once you consider the accommodation costs and actual contact hours with tutors (some UK degree courses offer a spartan six to nine hours per week),’ Tatler notes.

Ms Walpole also pointed out many US universities also offer the option to cut costs through bursaries, grants and scholarships at a scale that far surpasses similar British offerings.

‘The range is mind boggling and not limited to academic achievement,’ she explained. ‘Sports are one well known area that can provide not only a free ride, but other perks as well.

‘For those who are looking for a post-graduate degree, international students can be offered work to offset tuition fees. This could be in the form of teaching undergraduates or doing research with a respected professor.

‘This gives valuable professional and relevant work experience, as well as the degree itself.’

To accommodate for this growth, leading public schools have turned their attention to bolstering the support given to students with US applications, which do not operate on a centralised system like UCAS.

Sevenoaks, Shrewsbury and Marlborough College have even gone so far as to become accredited SAT centres, allowing their students to sit the exams – required for almost all US university applications – in house.

Autistic teenager, 19, is battered with knuckleduster in second attack