Home » Lifestyle » After 56 years buried in a box, new version of a masterpiece appears

Not many artists can be certain they’ve created a masterpiece. Jazz saxophone icon John Coltrane, who placed little credence in his own genius, had an inkling of something special when he’d finished composing A Love Supreme. Perhaps that was why he rarely played it in concert. How do you improve on perfection?

For decades it was assumed he performed it live only once – in France. Now a new version has come to light, recorded in Seattle by a saxophonist called Joe Brazil. Brazil occasionally played the tape to friends before his 2008 death. Eventually, Coltrane archivists sniffed it out of its box, and now it has an official release. 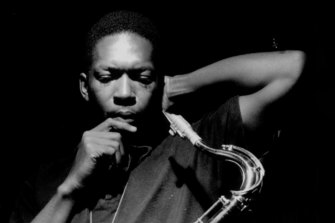 John Coltrane spawned countless imitators but no one has ever come close to his majesty and grandeur.

But let’s backtrack to the original. When he’d finished writing the music, Coltrane was beaming his bad-teeth smile at his wife, Alice, as he trotted downstairs from his room above the garage of their Long Island home. Alice saw such joy and tranquillity in his face that she later likened him to Moses come down from the mountain.

That was in September 1964, the month Coltrane turned 38. He could already look back on a stellar career leading his own bands, after honing his art with Miles Davis and Thelonious Monk, until he was jazz’s most compelling improviser. He had also honed himself into a better human being. He kicked heroin cold turkey to get back with Miles, and in the ’50s would walk home after a gig rather than pay for a cab, just so he could buy new shoes for his step-daughter.

On December 9 his station wagon rolled into the driveway of Rudy Van Gelder’s New Jersey studio, where his brilliant band – pianist McCoy Tyner, bassist Jimmy Garrison and drummer Elvin Jones, plus producer Bob Thiele – were waiting. In one night they recorded the four-part suite he had conceived in his upstairs room, making as potent an album as exists in any idiom. It was also a rare example of high art being greeted with instant popularity, selling 500,000 copies in its first five years.

This impact reflected not just the power of the playing and conception, but a quality that was largely foreign to western music, if intrinsic to many other cultures: a hypnotic effect, partly generated by spiralling repetition. Like his friend Ravi Shankar, the great sitarist, Coltrane had reached a plane where his music touched more than the intellect and emotions: it touched the soul, as reflected in the suite’s titles, Acknowledgement, Resolution, Pursuance and Psalm, and a poem on the cover: a prayer from Coltrane to his Maker.

His saxophone part in Psalm is an instrumental rendering of those words, syllable by syllable, harking back to his 1963 composition Alabama, in which he echoed the cadences in Dr Martin Luther King’s eulogy for the black schoolgirls murdered in a race-hate attack in that state.

In July 1965, the John Coltrane Quartet gave a complete performance of A Love Supreme at France’s Antibes Jazz Festival. A recording circulated as a bootleg for decades until officially being released in 2002. It was well-recorded and certainly potent (when was this band not?), but it didn’t quite catch the original’s hypnotic quality.

Coltrane played it again (unrecorded) in a Brooklyn Church, before this night in a Seattle club on October 2. By then the band had become a quintet with the addition of tenor saxophonist Pharoah Sanders, and they were joined by two guests: bassist Donald Garrett and alto saxophonist Carlos Ward. This much longer rendition (more than 75 minutes, compared with the original’s 33) is wildly energised and often bustling, with the drums to the fore and extra percussion from Sanders and others.

Add the density of two basses, and at times it can seem relentless, broken up by the piano and bass features, and the majesty of Psalm. To an even greater degree than at Antibes, the hypnotic quality is sacrificed on the altar of energy.

At its conclusion it’s probably Garrett who asks, “Is that the end?” Coltrane replies, “It better be! It better be, baby! Yeah!” This effusion comes from a man who confronted the big questions about existence, but via music rather than science or philosophy.

Both his grandfathers had been Methodist ministers, and that church-centred childhood seeped deep into his playing, although his spirituality lay vehemently outside organised religion. Some people hear the original A Love Supreme as angry music. I hear it as ecstatic.

A Love Supreme Live in Seattle is out now.

Why Film Permits Are Still Being Issued, and Studios Took So Long to Shut Down Production

Jessica Campbell, Election and Freaks and Geeks Star, Dies at 38