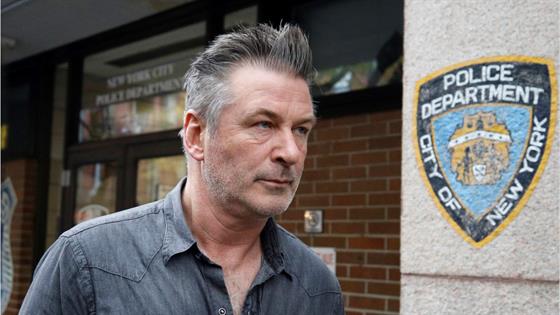 UPDATE: Alec Baldwin pleaded guilty on Wednesday to harassment in the second degree, stemming from his November arrest following an alleged altercation over a parking spot. According to the Manhattan District Attorney, the actor must participate in a an anger management class as part of his plea.

“1- At the Criminal Court bldg on Centre Street, I pled guilty to a charge of harassment, a violation,” Baldwin tweeted. “In that bldg today there are 3 murder trials scheduled, one involving a white supremacist who killed someone in Times Square. All the press was outside the courtroom I was in.”

“2- the press reported that I punched someone,” he continued. “That is untrue, and that is a serious charge. A man was punched in NY recently and died. 3- nothing that resembles justice ever enters or leaves any courtroom in this country. 4- The vermin at Fox News continues to tell a story about ‘an alleged punch.’ There are three cameras in front of my bldg. It didn’t happen.”

Alec Baldwin was arrested in November following an alleged altercation over a parking spot. Later that month, he was charged with attempted assault and harassment charges, which were deemed misdemeanor and violation-level charges, respectively. Per the AP (via USA Today), Baldwin had originally been arrested for assault and harassment; however prosecutors downgraded the charges.

Per NBC News, Baldwin’s attorney said at the time that video evidence would prove the actor didn’t do anything wrong during the arraignment. Deadline also reported the actor didn’t enter a plea or say anything during his court appearance.

According to NBC News, the hearing lasted less than a minute, and Baldwin was released on his own recognizance.

The New York Police Department had previously told E! News the actor had been held in custody for several hours after allegedly punching a man over a parking spot. According to the authorities, the alleged altercation happened at 1:30 p.m. EST at W 10th Street between University and Broadway. According to WNBC, the victim was taken to Lenox Hill Hospital after complaining of pain.

Per the Deputy Commissioner of Public Information, the It’s Complicated star was charged with assault and harassment and was given a desk appearance ticket. His court date is scheduled for later this month.

Following the arrest, Baldwin tweeted, “Normally, I would not comment on something as egregiously misstated as today’s story. However, the assertion that I punched anyone over a parking spot is false. I wanted to go on the record stating as much. I realize that it has become a sport to tag people [with] as many negative charges and defaming allegations as possible for the purposes of clickbait entertainment. Fortunately, no matter how reverberating the echoes, it doesn’t make the statements true.”

Baldwin’s fame has soared even more over recent years after he started impersonating president Donald Trump on Saturday Night Live. The star even received an Emmy for his performance. According to NBC 4 New York, Trump told a group of White House reporters, “I wish him luck” after news of Baldwin’s arrest broke.

This isn’t Baldwin’s first run-in with the law. Per NBC 4 New York, the actor was also arrested in 2014 for disorderly conduct.

8 Women On Their All-Time Favorite Sneakers, From The Super Sporty To The Stylishly Cool