LONDON (Reuters) – Model, presenter-turned-designer Alexa Chung went back in time for her second catwalk show in London on Saturday, showing a collection inspired by the idea of a group of women escaping to California’s Big Sur in the 1980s to go “off the grid”.

Chung, a long-time darling of the British fashion industry with a Mulberry handbag named after her, turned to 1983, the year she was born, for the autumn/winter 2019 line presented on the second day of London Fashion Week.

In a bunker-like setting with the odd sprout of greenery on the catwalk, models wearing black shiny leather outerwear opened the show, soon giving way to delicate prairie dresses and ruffled tops.

“I haven’t been interested in prettiness for a long time, and the world doesn’t look saccharine and innocent to me anymore,” Chung, who launched her eponymous brand in 2017, said in a statement.

“So here we are with “Off The Grid” – a gaggle of women have retreated but there’s safety in numbers. They’re regrouping and plotting somewhere on the West Coast where nature is so beautiful and big … Deep beneath the soil, in an underground bunker a new form of beauty is preparing to grow up.”

Designer Molly Goddard, known for her colorful eye-catching tulle dresses, said her clients would “stomp through the storm” next winter in her taffeta frocks, pinstripe suits and bright argyle knits.

Her show at London’s Foreign and Commonwealth Office featured models in dresses varying in length and style — jacquard, colorful knit, with knotted bows and see-through.

Some dresses had large collars and came in shades of green, pink, lilac, yellow and darker tones. Models also wore balaclavas, scarves wrapped around the neck and lace-up boots. 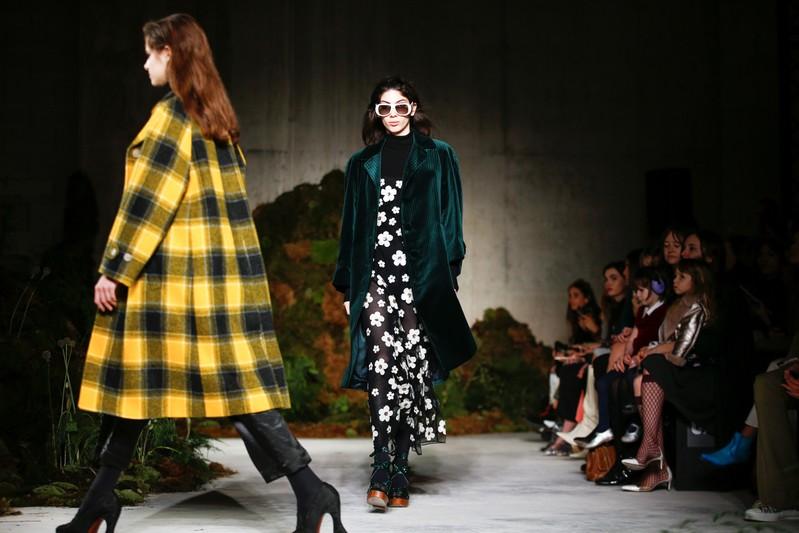 House of Holland described its “Global Citizen” collection of quilted orange check jackets, asymmetric skirts and blue tie dye outfits as an “utilitarian uniform for a generation who feel increasingly unheard, misrepresented and angry at the way their world is being governed.”