A kind-hearted photographer who rescued two former hunting dogs she fell in love with during a family holiday to Crete has been raising money for state-of-the-art wheels to give one of them a turbo-charged retirement.

Jo Cope smashed her £800 target for the special canine wheels within hours of launching a GoFundMe page, as aged pooch Jack, 13, captured the hearts of hundreds.

With well over £2,000 raised so far, Jo plans to give her Greek mixed breed dogs all the medical treatment they need, as well as a happy home with her and her children, Kade, Acacia, and Dakota, and their three-year-old Goldendoodle, Waffle.

‘It was actually Louis, the other former hunting dog we brought home, who first caught our eye when he and Acacia fell in love at a rescue, we visited during our Greek Island holiday in August,’ says Jo, who is from Essex.

‘He’s quite an old boy, too – we reckon between eight and 10. He’d been at the rescue for four years.

‘He had such a sad story, as he had just been abandoned in a forest and left chained to a tree. 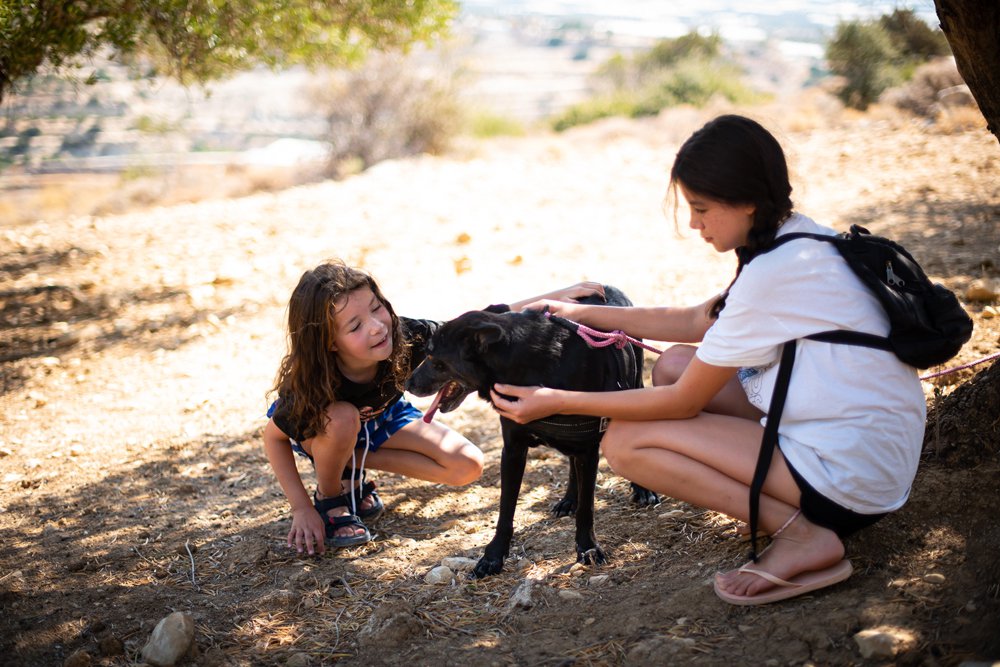 ‘There were hundreds of dogs to see, but he lay down with Acacia and let her tickle his tummy and pet him. She stayed with him for the whole time we were there and insisted she was having him.’

While bringing one old dog home from Crete would have been too much of a challenge for most people, soon the 35-year-old found herself agreeing to rescue two.

‘I spotted Jack on the rescue’s Facebook site and saw that he was disabled and started looking into bringing them both home,’ she says.

‘The rest is history.’

While Louis won her daughter’s heart, Jack won Jo’s as she read how the poor pooch had been hit by a car – breaking his jaw, damaging his spine and leaving him with paralysed back legs, while he also had arthritis in his front legs.

‘I sat there at the rescue Googling flights to see how I could get the dogs home,’ she says.

‘We had cheap tickets and I couldn’t change them, but alternative tickets for us all were too expensive, and Greece doesn’t allow dogs to be flown out unaccompanied, so it looked like the most cost-effective way would be to go home and come back again by myself to bring them back to England.’

Eventually, in October, Jo returned to Crete with Dakota and spent £415 bringing both dogs home – driving to Paris and back to catch the flights.

Jack, who had been sent to Athens for surgery to help with his injuries during his time at the shelter, was also given wheels by his carers there, to hold up his back legs and help him move around.

Before they knew it, Jack and Louis were settled and happy as part of a devoted new family.

‘It’s quite difficult sometimes to settle in older dogs, especially when they’ve had a horrible time, but they are lovely and get on really well with Waffle,’ adds Jo.

Keen to do all she could to ease Jack’s painful arthritis in his front legs, Jo paid for him to have hydrotherapy and laser therapy, designed to stimulate the nerves,

She was horrified when the experts working with the dog told her that his wheels were hurting, rather than helping him and that they needed to be replaced urgently.

She was recommended a specialist wheel-cart, available from a firm in the USA, which would cost around £800.

Unable to afford it as well as paying for his treatment, she launched a GoFundMe page, hoping Jack would melt the hearts of kind strangers, just as he had melted hers.

‘Now we have well over £2,000 and will spend the additional money on giving him all the treatment he needs and ensuring both dogs have the best old age ever.

‘I was working extra hours to try and pay for treatment, but I couldn’t really keep up, so this is amazing.

‘Without these wheels, he’s going to lose his independence, which would be so sad, as he’s really happy living with us.

‘He loves going to the forest with the wheels he’s got, but they are harming his legs and making everything worse, not better, so they have to go.

‘Now I can afford to buy him dog shoes, to make him more stable and his wheels will mean he can run around like a puppy again.’

The animal loving family are hoping to get the wheels in time for Christmas.

‘I am overwhelmed by people’s generosity,’ says Jo.

‘But Jack is such a big, soppy pup – as is Louis – I’m not surprised he’s cast a spell over everyone. They’ve both worked their magic.’