The eruption in Australian politics has put Anthony Albanese on course for six years in power, at least, if he acts carefully to complete the demolition of the Liberals.

The prime minister has a much stronger hold on power than the election results suggest at first glance. Labor has 75 seats, and may get 76, but the prospect of 77 seats has receded. Albanese looks like he is holding on by his fingertips. 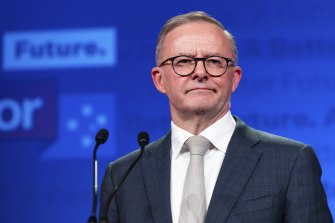 Yet the defeat of the Liberals puts The Lodge out of reach for anyone else in this parliament for at least two terms – provided, of course, Labor learns the lessons of 2010 and gives its new prime minister its loyalty.

The electoral pendulum shows Labor is within striking distance of winning more seats from the Liberals at the next election if it governs with competence and care.

“I’ll try to keep it real on the way through and continue to keep my feet on the ground,” Albanese told Sky News on Sunday morning.

In fact, he is outlining an agenda that expects two terms. For all the talk about a “small target” strategy, Albanese is repeatedly emphasising his intention to seek a referendum on constitutional recognition of First Australians. He also wants a Voice to Parliament to give Indigenous people a say. These are enormous undertakings that will take time.

His stated goal is to go to the 2025 election with results on his election pledges. That means more childcare subsidies and a review into whether universal childcare is possible, industrial relations reform and a reconstruction fund to spend money on local manufacturing.

It also means a climate policy that requires companies to cut emissions to meet an expanded “safeguard mechanism” on their output – a more difficult goal than it looks when measured by the 2030 target alone.

The rejection of the Liberals in so many seats gives Albanese the gift of time. He does not appear to be worried in the least by the likely rise of Peter Dutton as opposition leader – someone he respects but someone whose political persona has set like concrete for many voters. As a right-wing warrior, Dutton may be the leader the Liberals need to hold the show together but not the leader they will want a few years from now when they try to regain the middle ground in Australian politics. His great advantage is his base in Queensland, where Labor struggled badly.

The Nationals kept their 16 seats but the Liberals are looking at a very slow return to power unless they miraculously win back their blue-ribbon territory in Sydney and Melbourne.

Independent MPs like Helen Haines and Zali Steggall show how to hold a formerly Liberal seat for years after the first victory; newcomers like Monique Ryan and Allegra Spender will probably repeat the pattern. The success of the independents provides stability for Labor.

The most difficult negotiations for Albanese, with Greens leader Adam Bandt, are only beginning. No party leader has a bloc that could join the conservatives to reject the Labor agenda or force a no-confidence motion in Albanese and his government. Only a mystifying alliance of Liberals, Nationals, independents and Greens could do this.

Bandt will shape this term of Parliament with a blocking stake of 12 Greens in the Senate. He wants an end to new coal and gas projects, something the new government is unlikely to grant. But is he stepping back from his old calls to phase out coal and gas completely? So far, Albanese thinks he can stick to election pledges including his 43 per cent target for emission cuts by 2030.

One Labor insider, looking at the election outcome, puts it like this: “Show me how they could stop Labor getting a second term.” On any reading, it is very hard to show.

How You Can Buy Beyonce’s Latest Ivy Park Fashion Line

‘Spider-Man: No Way Home’ Leaps To $1.53B WW For No. 8 On All-Time Global Chart – International Box Office