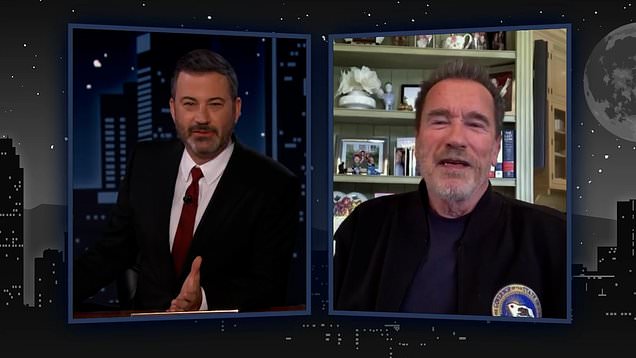 Arnold Schwarzenegger couldn’t get through this year’s Oscars awards ceremony, admitting he turned it off because it was ‘so boring’.

The Academy Awards looked a little different this year with a much smaller guestlist of A-listers and no musical or theatrical performance, while the location moved from its usual home at the Dolby Theatre in Hollywood, Los Angeles to Union Station.

It also switched up the order in which winners were announced with the best picture grand reveal which typically closes the ceremony, swapped for best actor which was won by Sir Anthony Hopkins.

All the changes were just too much for Arnold, who had some brutally honest thoughts on the show.

Speaking on Jimmy Kimmel Live on Tuesday, the Terminator actor admitted: ‘I basically just turned it off and I just couldn’t watch it anymore because there was so much talent there on the stage that it was so boring – how could you make this, with all this talent, so boring?’

He then jokingly offered a suggestion to improve next year’s awards, adding: ‘I think next time, they should take it to Muscle Beach and have the Oscars on Muscle Beach.’

Muscle Beach, located in Santa Monica, California, is a hotspot for bodybuilding, gymnastics, acrobatics and general physical fitness which, of course, former bodybuilder Arnie would know all about.

The 73-year-old actor has never been nominated for an Oscar but he did win the best male acting debut in a motion Picture Golden Globe for his role in Stay Hungry. He also received a best performance by an actor in a motion picture – comedy/musical – for Junior in 1995.

Arnold was in quite a sharing mood during his chat with Kimmel and revealed his daughter Katherine gets anxious whenever he holds her baby girl, who she shares with husband Chris Pratt.

‘I did all of that when I had kids. When my kids were growing up, I participated, and it was a lot of fun to do that,’  Arnold explained.

‘But I have never changed diapers on Lyla, because I think that Katherine is the expert gatekeeper. She just, whenever you touch the baby, says, “Oh, my god! Oh, my god! Like this”,’ he added.

Got a showbiz story?
If you’ve got a celebrity story, video or pictures get in touch with the Metro.co.uk entertainment team by emailing us c[email protected], calling 020 3615 2145 or by visiting our Submit Stuff page – we’d love to hear from you.

'Counting On': 9 Times Jinger Duggar Proved She Is the Biggest Rebel in the Duggar Family

Who Is Jordyn Woods Dating? She’s Reportedly Hanging Out With An NBA Star