While you were sleeping! Woman gets revenge on her boyfriend by asking people to Photoshop a hilarious image of him snoozing on a road trip to show what he might have missed on the way

One woman has decided to use the power if the internet to create what may arguably the best Photoshop shout out of all time.

Eria Auguste, of Baltimore Maryland, posted on the Facebook page I’m telling God, a group that specializes in creating and sharing quality memes, asking for members to Photoshop scenes in the background of a photo of her sleeping boyfriend.

It turns out, her boyfriend Scott, Eria and some of their friends were on a roadtrip when Scott fell asleep in the back of the car (traveling it tiring after all). 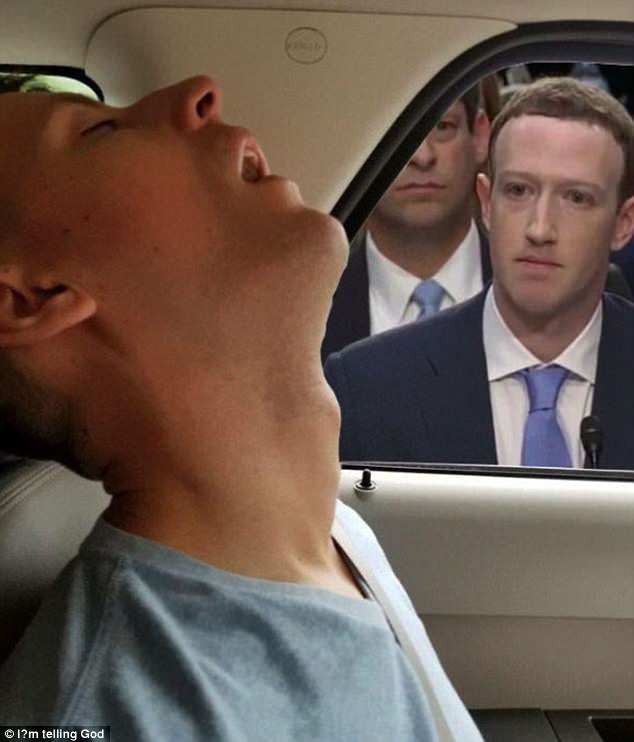 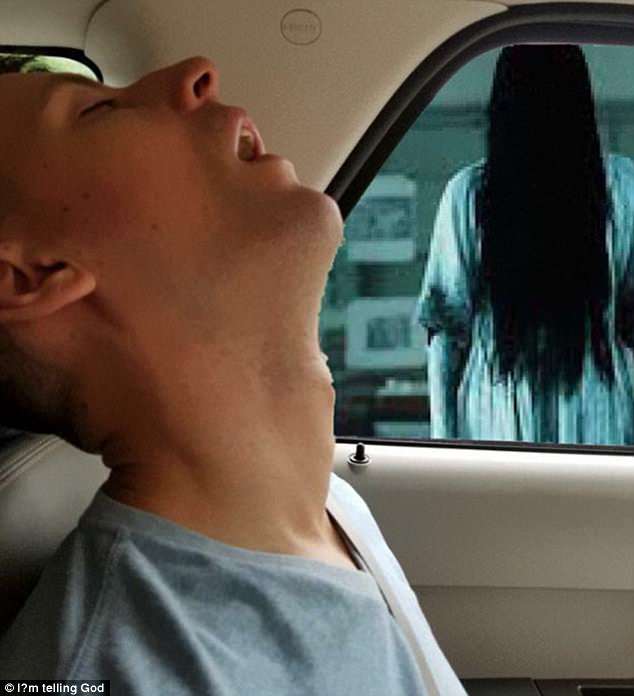 Scary: She asked members of the group to Photoshop scenes and travel destinations after he fell asleep during a road trip 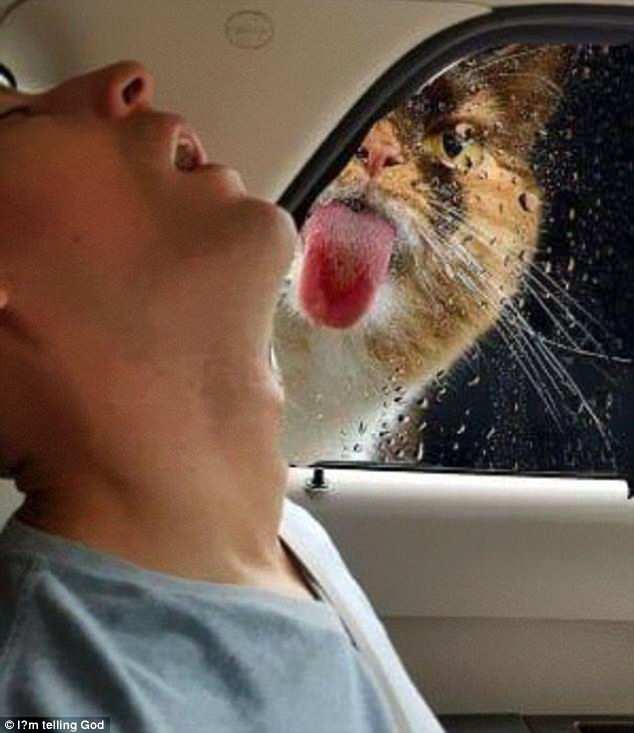 Up close: One member Photoshopped an image of a giant cat licking the window Skills: Another member posted a photo of Kim Jong-un peeping in through the car window 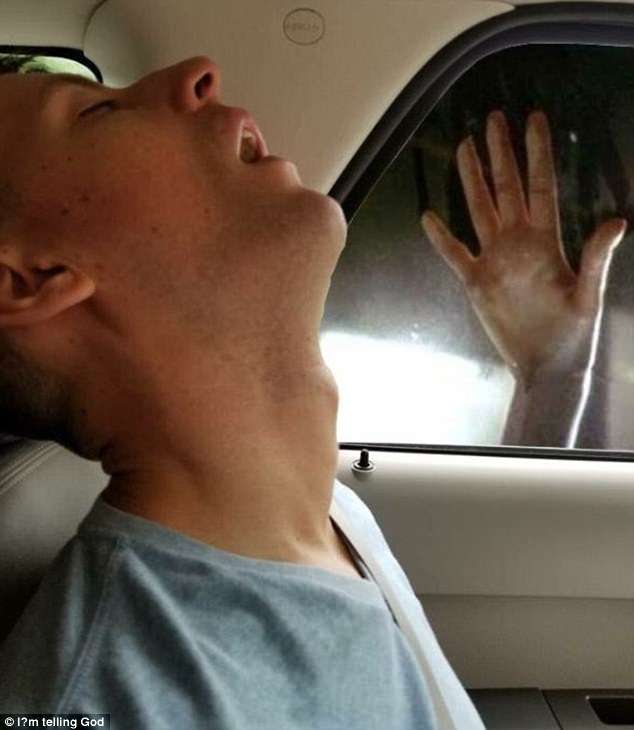 Never let go: One person shared an image of a scene from Titanic when Rose wipes her hand on the window

As a way to poke fun at him, she took photos of him while he was sleeping and posted one to the Facebook group asking people to Photoshop some scenes into the background so she could tell him what he missed.

‘Please take this picture of my bf “having fun” on our road trip and put different scenes/travel destinations in the window,’ she said in her post according to Best Ten News.

‘I’m going to tell him about all the stuff he missed while he was zonked. Update: The hashtag is #SleepyScott.’

Naturally, the internet was on board and proceeded to create an array of Photoshopped imaged of Scott with him asleep next to scenes from Jurassic Park, Mark Zuckerberg and even the girl from The Ring. 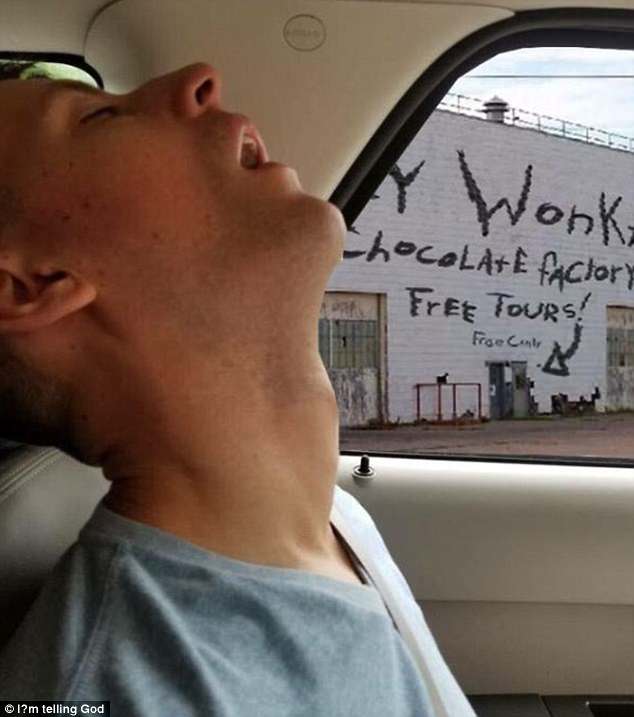 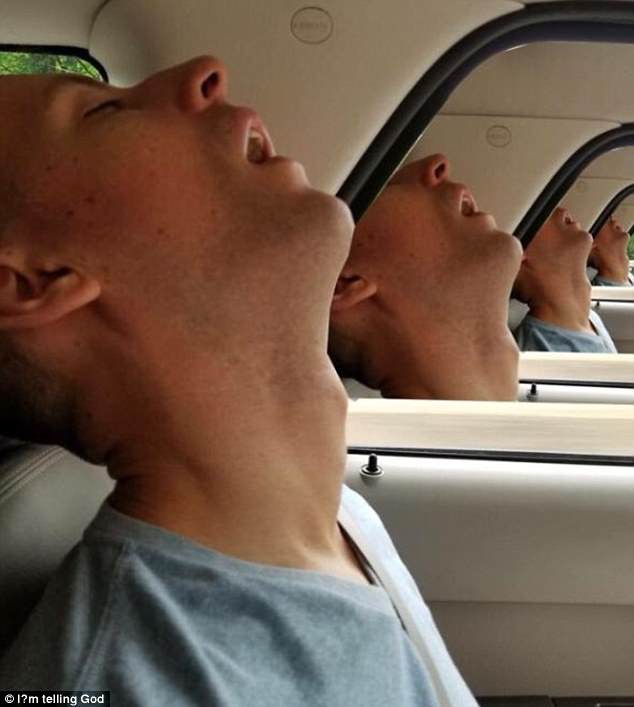 Illusion: One person Photoshopped more images of Scott into the background of the original photo 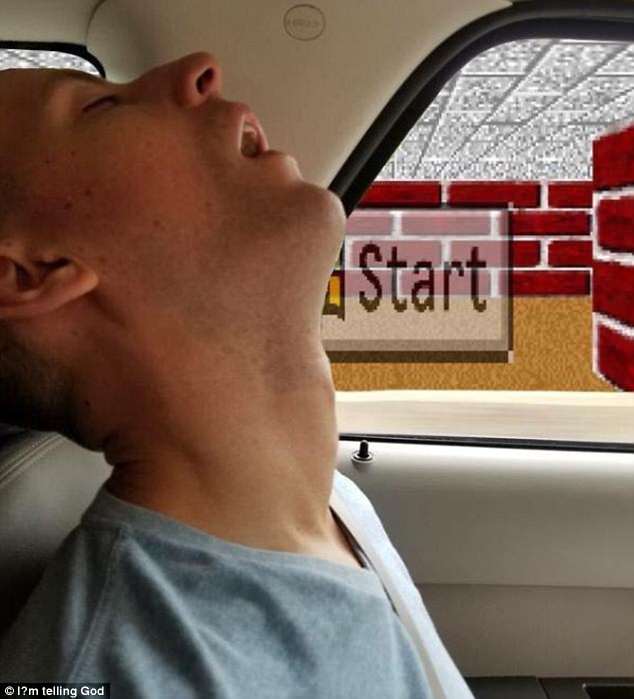 Wake up: And someone included a snap of a video game into the image of Scott sleeping in the car 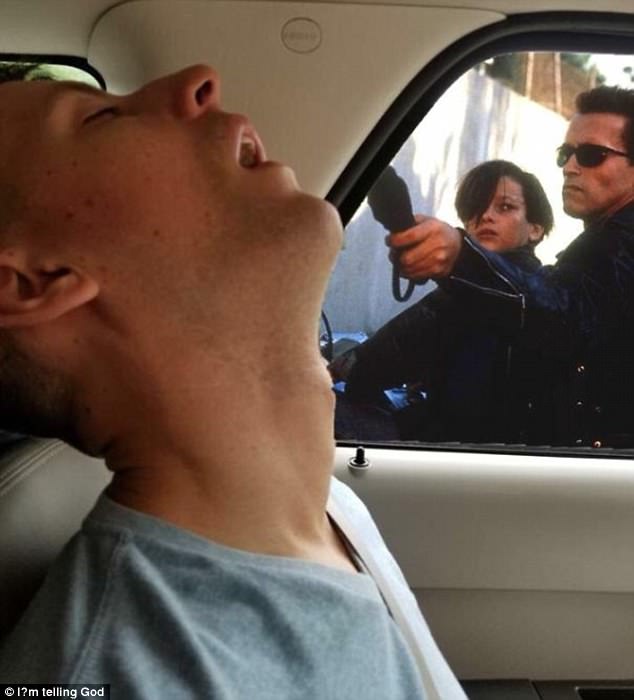 Movie buff: Someone Photoshopped an image of Arnold Schwarzenegger from The Terminator franchise 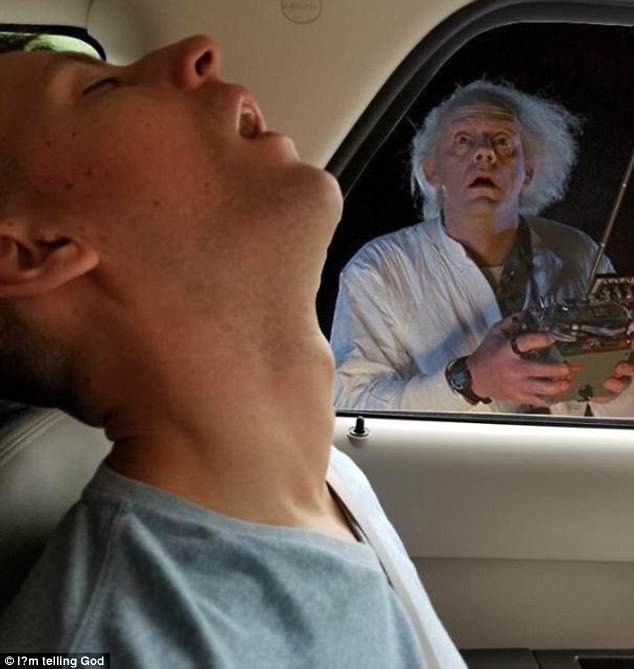 Quality cinema: Another movie-lover Photoshopped a scene from the 80s classic Back to the Future

‘There’s a lot of funny, f****d up people in “I’m telling God,” Eria told Bored Panda. ‘I figured I’d get some interesting responses from them. I just had no idea how many!’

‘I had no idea it would blow up like that. I was totally impressed by everyone’s creativity and the amount of collaboration that happened between strangers in the comments.’

And as for what drew her to take a picture of her boyfriend while he was sleeping, she said that she was amazed at the fact that he was able to get some shut-eye in the back of a car with other people.

‘We were on a road trip to an event,’ she said. ‘There were five of us in the car but no amount of our energetic conversation, loud laughter or the bumps in the road could wake him up. I took a picture because it was so funny to us that he could sleep through all that.’ 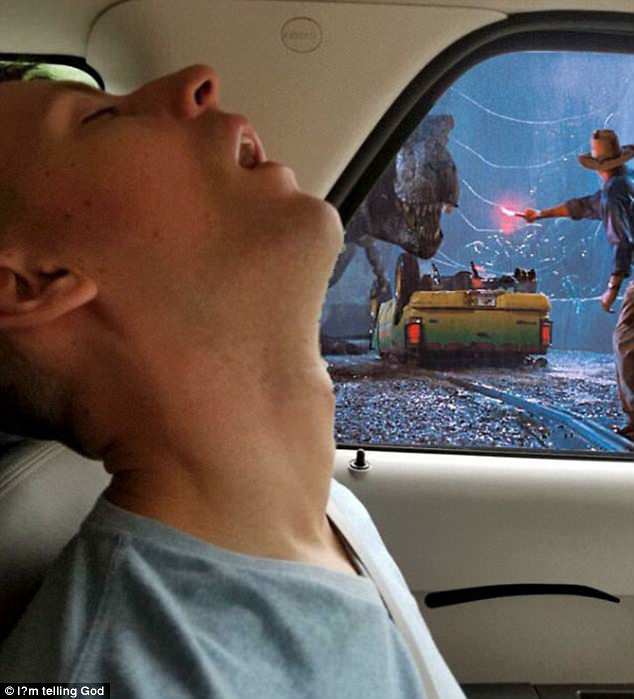 Look out: One person posted an image of Scott next to a scene from Jurassic Park 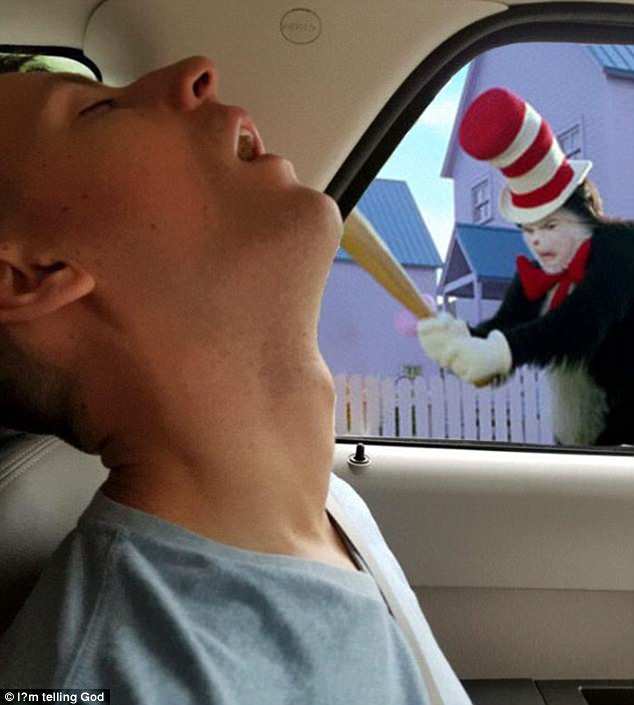 Throwback: Another person went back in time to the days of Cat in the Hat and used an image from the film 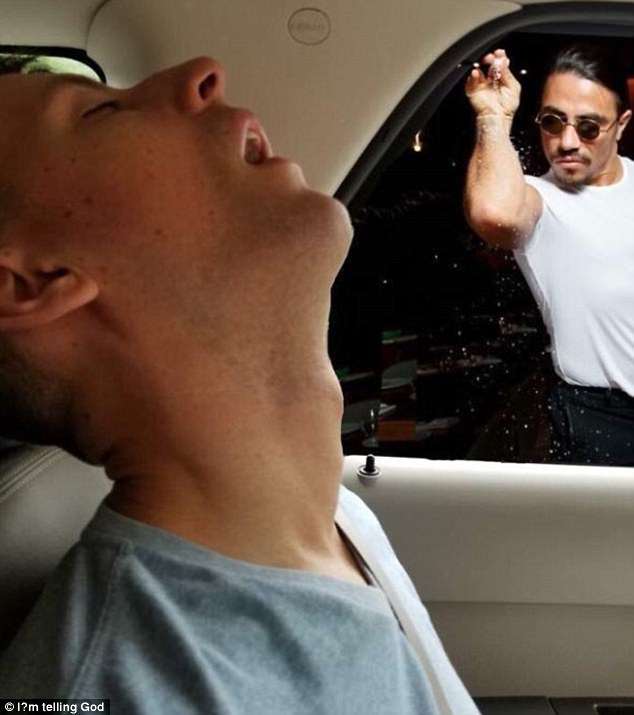 Meme: Someone used the hilarious salt bae meme to include in the Photoshopped image of Scott 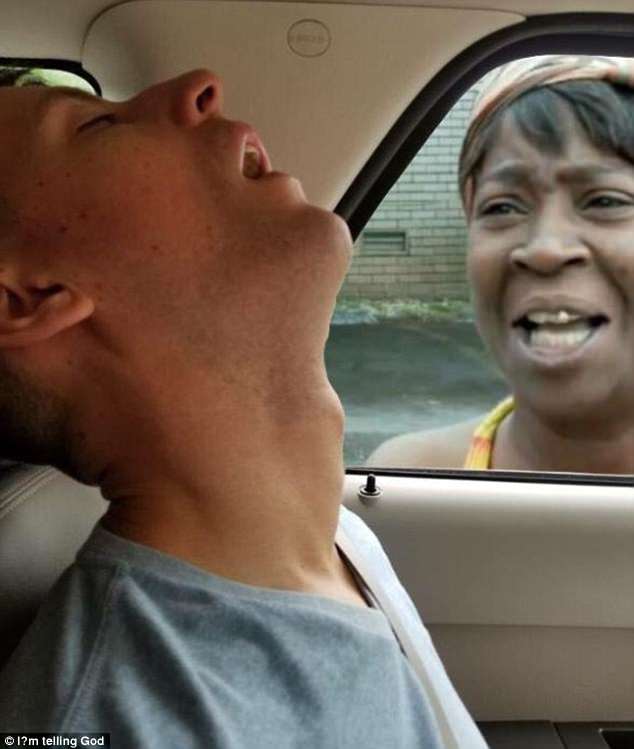 Plenty of time: Another person used a classic meme (ain’t nobody got time for that) to Photoshop into the picture 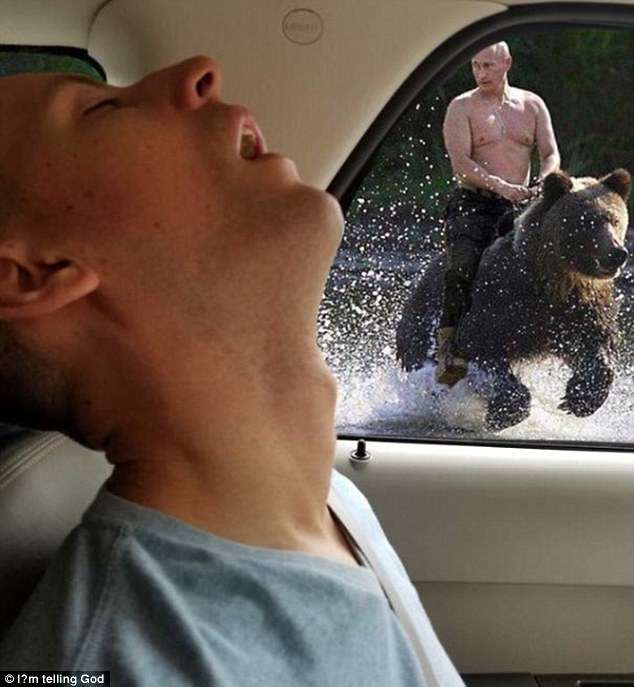 Nature: Someone posted the photo alongside a picture of a man riding a bear through the water 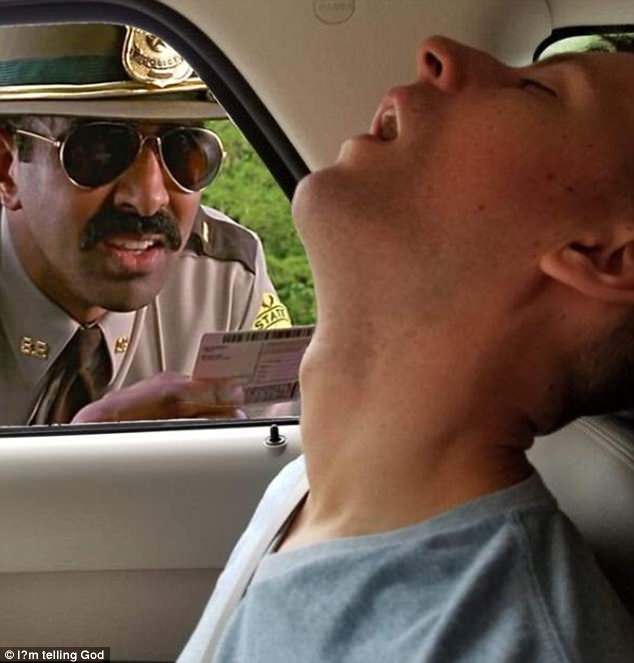 Under arrest: And lastly, a member of the Facebook group shared an image of Scott next to a sheriff from a movie

Over the years, there have been an array of Photoshopped imaged appearing on the internet but the most well-known would undoubtedly have to be the Photoshop fails that just seem to keep popping up.

Recently, Bored Panda put together a hilarious compilation of Photoshop fails,  showing the finished product isn’t always an improvement on the original.

The snaps, which were shared in February, include airbrushing disasters from beauty posters, fashion magazines and, ironically, even tech advertisements.

It just goes to show that no matter the content, people will always find ways to get a laugh out of Photoshop – whether it’s unintentional or deliberate.