Home » Lifestyle » The BBC behaved like idiots but I fear the ruling, says STEPHEN GLOVER

The BBC behaved like idiots, but I fear the judge’s ruling could let police raid your home at 4am without facing public scrutiny, says STEPHEN GLOVER

The BBC’s coverage of the police raid on Sir Cliff Richard’s home in 2014 was intrusive and sensationalist. Any decent person is bound to feel sorry for him.

There he was in Portugal, watching footage on television of his Berkshire home being raided by police, who were said by the BBC to be investigating him over alleged sexual offences against a minor.

He was never arrested, let alone charged. Which of us would not, exactly like Sir Cliff, feel outraged if we were put in the same position? It is easy to see why he should have said after the event that he felt his life had been ruined.

And yet the old saying that ‘hard cases make bad law’ is an apt one. However unjustly Sir Cliff was treated by the BBC, the judgment delivered yesterday in his favour in the High Court, and the award of £210,000 damages against the Corporation, threaten the freedom of the Press. Let me explain. 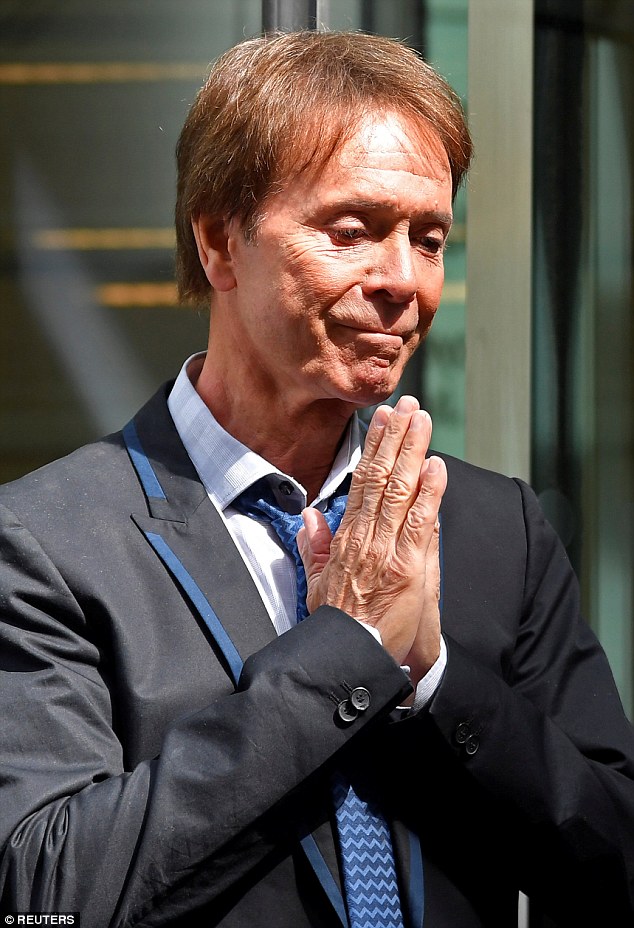 The BBC, I say again, behaved idiotically. They had a tip-off from South Yorkshire Police (who had been investigating Sir Cliff for some time) that a raid on his home was about to take place.

Instead of reporting this in a low-key and matter-of-fact way, the Beeb chose to summon a helicopter (at licence-payers’ expense) and to treat the incident as though World War III had broken out.

This was uncharacteristic behaviour by a media organisation that usually keeps a judicious distance from stories of this sort. Indeed, had a red-top tabloid behaved in such a brazen manner, it is easy to imagine Auntie pursing her lips and delivering a supercilious lecture.

So the whole approach was wrong-headed and ill-judged. South Yorkshire Police were even more at fault for collaborating so ostentatiously (eight plain-clothes policemen in five unmarked cars) in a wild caper of this sort. As for the Corporation nominating its overblown coverage for the Royal Television Society’s scoop of the year award — well, that was a crass attempt by our powerful public service broadcaster to honour a severe lapse of taste.

News helicopter images of police arriving to searching a Berkshire property belonging to Sir Cliff Richard in relation to an alleged historical sex offence.A number of items were removed from the property in the Sunningdale area for further investigation, but no arrests  were ever made.

So black marks to the BBC. But not entirely. For although Sir Cliff had not been charged or arrested, it was arguably in the public interest to report that he was under investigation.

Significantly, Mr Justice Mann made clear yesterday in his judgment against the Corporation that, even without all the razzmatazz, the simple naming of Sir Cliff as a suspect would have amounted to a breach of his privacy.

In other words, unless the learned judge is overturned on appeal, there is a danger that media organisations will no longer be allowed to identify anyone subject to a police investigation who has not been arrested or charged.

I realise some will think this a good thing. Why should people have their names made public through the media when the police have wrongly got it into their heads that they have committed a crime?

But there are obvious dangers in preventing publication. For one thing, as Theresa May rightly observed yesterday, the mere mention of a suspect’s name sometimes encourages other witnesses to come forward. 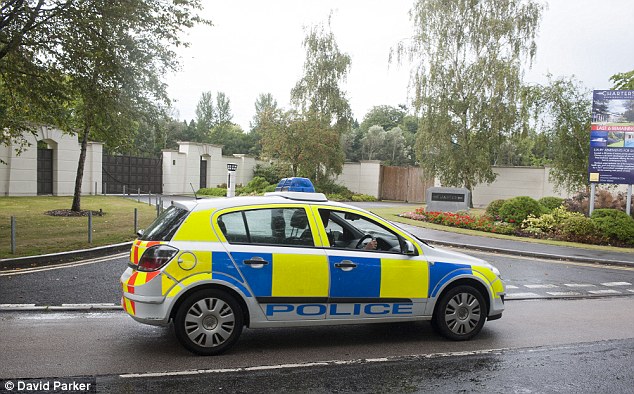 Even more pertinent, to my mind, is the issue of police conduct. I don’t want to live in a country in which it is permissible for the police to raid a person’s house at 4am on suspicion of a crime having been committed and the media are forbidden to report this fact.

The principle that justice must be open and transparent is precious. And that applies not only to the judicial process, but to those who enforce the law — namely the police.

Sorry though I feel for Sir Cliff, he is, after all, a very rich man who is able to stand up for himself. One might even add that, as someone who has benefited hugely from positive media publicity, he has learnt to expect that the wind will sometimes blow in a contrary direction.

Think instead of someone who in normal times is of no interest to the media. Who protects him or her if the police come calling in the middle of the night? Having turned their house upside down, they may nonetheless decide against charging the suspect, who could be put on police bail.

That this already happens can scarcely be doubted. In fact, my confident bet is that as a result of the alarming decline of local newspapers, the police find themselves under much less scrutiny than they used to be.

Needless to say, like most generally law-abiding souls, I thoroughly support the police as an institution. But that does not mean that they should be allowed to go about their business exactly as they please. 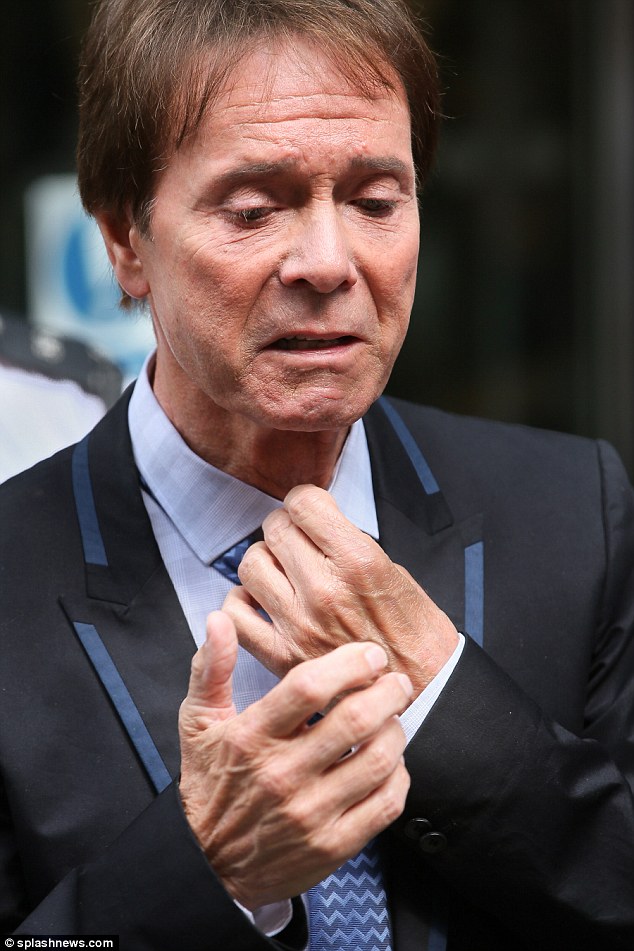 It can’t be denied many in the police have an in-built tendency to be secretive — one might say to be a law unto themselves. And following the misguided injunctions of the 2012 Leveson Report, there is much less interchange between journalists and police officers than there used to be.

So the risk that an innocent individual under police investigation might face unwanted publicity must be weighed against the greater risk of the police becoming increasingly secretive and unaccountable.

It’s interesting, by the way, that having been in ill-judged cahoots with the BBC over its investigation into Sir Cliff Richard, the police should have effectively swapped sides during the subsequent privacy case. One wonders whether they foresaw the benefit to them of Mr Justice Mann’s prospective ruling, giving them more scope to act independently of public scrutiny.

Perhaps such a suggestion is ungenerous. But I’m afraid that the way in which South Yorkshire Police worked with the BBC, and their heavy-handed tactics during the raid on Sir Cliff’s home, give one no confidence in their moderation or good sense.

Does Mr Justice Mann realise the possible consequences of what he has done? Like many modern judges, he places too much emphasis on celebrities’ right to privacy (invoking Article Eight of the European Convention on Human Rights) against wider considerations of the freedom to publish (Article Ten).

The truth is that this is another example of a judge-made law extending privacy rights at the expense of the right of the media to report the truth — in this case that a celebrity was under investigation for a serious crime.

I feel cross with the BBC for the cack-handed way in which it went about its task. The wildest red-top — which these days almost certainly operates under regulations far tighter than those that appear to affect Auntie — would never have behaved in such a cavalier manner.

Hiring a helicopter! What can have got into the BBC? A more explicit admission than we have so far received from the Corporation that it badly misfired is surely called for.

But if I am cross with the Beeb, I am wary of the police. I am frightened of allowing them more latitude to operate unexamined in the shadows.

So it’s good that the BBC is going to appeal against this potentially dangerous ruling. Let’s hope that Appeal Court judges cherish liberty more than Mr Justice Mann.

On this issue, newspapers and Auntie find themselves in the same trench. I’m sorry for Sir Cliff Richard, but I will feel much sorrier still to see a sustained assault on the freedom of the Press.

Mum uses £3.50 two-ingredient trick to clean her filthy grill and oven trays – and the results are incredible