Home » Lifestyle » Behind the loathing of the Duchess of Sussex 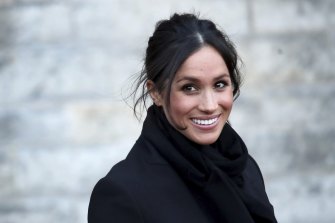 Much hatred is being heaped on Meghan, Duchess of Sussex, in the wake of the Oprah interview.Credit:Getty Images

Almost as soon as Oprah Winfrey’s sit-down with Prince Harry and Meghan, Duchess of Sussex, aired last week, the vitriol came roaring like a hurricane.

Criticism has, of course, closely followed the couple since stepping down as senior royals last year, and while there has been much public support over the tell-all interview – in which Meghan, 39, said she had felt suicidal while pregnant but was denied mental health support, and that a senior member of the royal family had expressed concerns over the colour of her unborn baby’s skin – the visceral hatred has been difficult to miss. More specifically, the visceral hatred of Meghan.

Conservative commentators predictably led the charge. After Meghan admitted she “didn’t want to be alive any more”, Piers Morgan shot back on Good Morning Britain: “I don’t believe a word she said.” (He’s since left the breakfast show and is digging his heels in, repeatedly referring to Meghan’s “bullshit”.) Shortly after, US journalist Megyn Kelly said: “You can become a princess. You can live in a palace. You can [have] access to the crown jewels and still somehow find yourself a victim.”

And there have been the memes: a fake image of Queen Elizabeth brandishing a gun in an apparent desire for revenge over Meghan’s “bitching”; Meghan and Harry’s faces photoshopped onto each other’s bodies to indicate the prince isn’t “wearing the pants”.

Time and again, the words calculated, pathetic, deceitful, outspoken are cropping up beside Meghan’s name. These sentiments are echoing far and wide – on social media, in group messages, in comments and letters received by this publication.

So how does this one woman draw such intense loathing from people who do not know her personally?

“It’s been quite dramatic,” says Jayashri Kulkarni, a Monash University professor of psychiatry. “Meghan embodies privilege, wealth, power, fame, she’s a celebrity, she’s the antithetical to the conservative look of a princess … so she’s already othered in that sense.”

Associate Professor Lauren Rosewarne, a University of Melbourne sociologist, adds: “She’s a woman, she’s an outsider to the royal institution, she’s a person of colour, she’s smart, and she’s American. So she hits a number of factors that stir judgment and in this case that’s manifesting in a disproportionate amount of hatred.” 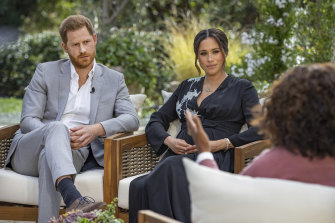 Prince Harry and Meghan during their interview with Oprah Winfrey.Credit:Harpo Productions

Australian National University sociology professor Mary Lou Rasmussen says when the white man – Prince Harry – is completely off the hook (despite long expressing his unhappiness as a royal), race and gender are unquestionably at play in the “irrational” loathing of Meghan. “[It] speaks to things [people] can’t say but feel really deeply – whether they are aware of it or not,” Rasmussen says, explaining ingrained prejudices are often unconscious and influenced by social structures.

And due to discomfort around racism, Rasmussen says many viewers didn’t give Meghan’s claims credibility. “They see her as someone who is shrill instead of someone who is giving a valuable account.”

Rosewarne says unless people have lived experience of discrimination, they struggle to see it. “They come up with other reasons as to why this woman is a problem,” she says, but points out labelling Meghan “calculating” and “gold digger” are gendered. Or calling her a mouthy American falls into the racist trope of the angry black woman.

Much divide has been on generational lines. A British YouGov poll found that in the wake of the Oprah interview, those under age 25 were mostly siding with the Sussexes, while those 50 and older were firmly backing the royal family.

Rosewarne says some older people view the interview as a crude betrayal of the Queen, who is deeply private, and the institution she heads. “Most people in Australia have never known another monarch,” Rosewarne says, adding there is a great sense of respect for her legacy, even among those who don’t consider themselves royalists.

“Comments can be racist or sexist even if a person doesn’t see themselves that way: this isn’t about self-perception.”

Also, Kulkarni says, older generations have typically been raised to deal with problems with a stiff upper lip. “So this [interview] is seen as washing your dirty linen in public.” Rosewarne says younger people are often considered “oversensitive” or “snowflakes” for their “oversharing” and “woke” politics – and this is what Meghan represents.

Rasmussen adds: “[The interview is] attacking values of the older generation … saying their silence around issues [such as racism and mental health] is a problem.”

Rosewarne stresses not everyone has to like Meghan. “She is likely flawed … We’re never going to know a true story, we don’t have a surround sound view of everything that went on.” 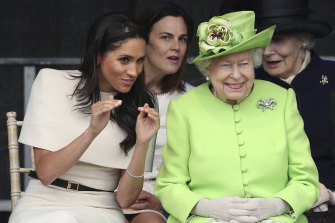 Meghan, the Duchess of Sussex, with the Queen in 2018.Credit:PA

And it’s OK to eye-roll at some of the antics of the Sussexes as a couple – for example much has been made of their financial motives or their decision to do a tell-all with Oprah rather than continue trying to find a resolution privately. This is not automatically racist or sexist, says Rasmussen.

Kulkarni warns that the problem with much of the hostility to Meghan is the ripple effect disdainful commentary has on others in the community who are made to feel hurt, further stigmatised and afraid to speak out – whether it be over racial, gender or mental health issues.

“Critical evaluation and balanced discussion is not a bad thing,” Kulkarni says. “[But] hateful language and hateful behaviour really lead to all sorts of unwanted effects … If the language is inflammatory then it’s not just Meghan in the firing line, it’s all women of colour, or it’s all women, or all people with mental illness, it becomes this bigger group.

“Unfortunately the general public got caught up in the ‘is this real or not real’ … that’s really dangerous and unhelpful.”

Kulkarni says that the gut response of disbelief and looking for an agenda feeds a troubling narrative: Meghan was called a liar for saying she felt suicidal and experienced racism in the same week it emerged Brittany Higgins – the former Liberal staffer who was allegedly sexually assaulted at Federal Parliament – was called a “lying cow” by her ex-boss. “What’s coming through is this thread of invalidation of women in crisis situations,” Kulkarni says.

It’s important – and healthy – for people to interrogate themselves to understand why they are feeling anger, says Kulkarni.

She explains that hating a celebrity involves well-known psychological mechanisms to deal with internal conflict at a distance. “What people are actually doing is displacing events, views or feelings they may harbour for something or somebody and projecting onto somebody else,” Kulkarni says. “It’s like when you’ve had a dreadful time at work but you can’t deal with it there, so you get home and pick a fight with your spouse. It’s the displacement of the problem.”

In the case of Meghan, the “problem” she embodies could be a range of things.

“People who have strong views one way or the other [should] self-reflect on what underpins the strong emotional response,” Kulkarni says. “It’s also possible that people who are pro-Meghan have a visceral hate of the royal family.”

Rasmussen agrees, and urges people to examine how their feelings are for Meghan compared to other figures, like Prince Harry, Princess Diana or Catherine, Duchess of Cambridge.

“If you’re feeling a stronger level of hate for Meghan, question that,” she says. “None of us is a saint. It’s a kind of wake-up call for us to think about what things are we not seeing.”

Get a little more outta life

Start your week with practical tips and expert advice to help you make the most of your personal health, relationships, fitness and nutrition. Sign up to our Live Well newsletter sent every Monday.