From Tesco to Morrisons we reveal how supermarket loyalty schemes compare and where you can make the most money.

It comes as discount supermarket Lidl has launched a new rewards app to help you save even more money on your food shop. 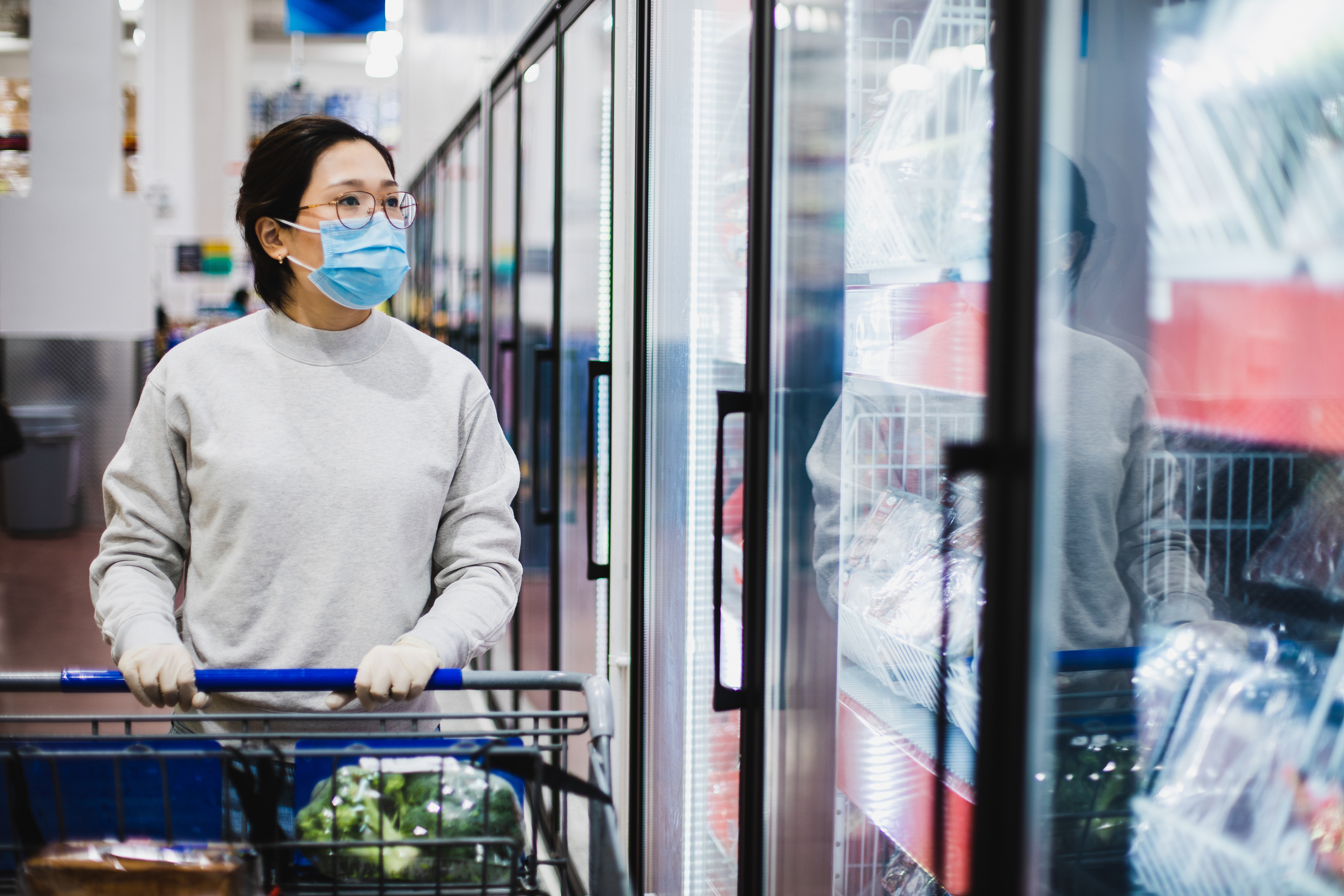 The app, called Lidl Plus, gives you money-off coupons each time you reach a spending target every month.

It’s the latest supermarket loyalty scheme to be launched, following in the footsteps of Tesco, Sainsbury’s, Morrisons, Waitrose, Iceland and M&S.

So to help you work out which scheme gives the best value for money, we've looked at how each scheme stacks up.

We've also weighed up how much you'd make from a £60 shop, based on the Office of National Statistics latest figures that show Brits spend on average £61.90 on their weekly shop.

Here’s what you need to know.

Unlike other stores, it is a prepaid card which you load money on to and then spend in a store or on your online shop.

Each time you load £20 on to your card, you’ll receive £1 from Iceland.

You also get an extra £2 when you first sign up and register your card.

It's unclear if there's a limit on how much you can load up and earn cashback on – we'll update this story as soon as we know more.

But once you have put money onto the card, you can't withdraw it and it can only be spent in Iceland.

Money saved onto the bonus card isn't protected by the Financial Service Compensation Scheme were Iceland to go bust.

But the supermarket has said other protections are in place – we've asked for more information on this and will update this story when we hear back.

Launched this month, Lidl’s Plus scheme uses an app rather than a card.

How it works is you scan your card as you shop in store (Lidl currently doesn’t offer an online shopping service), which sees you earn points.

Once you’ve earned a certain amount of money, Lidl will give you a reward each month.

New customers who downloaded the app will also see a voucher for £5 off when they next spend £25 in store. We’ve asked Lidl how long this promotion is available for and will update this article when we hear back.

There are also other offers available too, including 20% off laundry products, but they are only valid for a certain period of time – sometimes only as short as two days.

You can only use one promotion per month and the offers above will run until November 30.

Morrisons More was launched in 2016, which replaced its existing store loyalty card.

How it works is shoppers can get five points for every £1 spent in store, online or in the supermarket's cafe, as well as five points per litre of petrol purchased at one of Morrisons' garages.

One Morrisons point is worth 1p.

These are called “Fivers” by the supermarket.

If you spend £60 a week at the supermarket, you’d have to do around 17 food shops before getting your first £5 voucher.

You can also now also get your vouchers on your phone through the Morrisons More app, and choose whether you want to spend your vouchers in store or online.

NHS staff also currently have an extra 10% off their shops with the scheme until September 30.

In July this year, M&S scrapped its points card model and instead now offers a rewards scheme for its shoppers.

Each time you shop at M&S in a store or online, you could get a reward.

As the Sparks card reward scheme is tailored to what each shopper buys, it’s tricky to predict what rewards everyone will receive.

But M&S has said that some rewards include:

Like M&S’s Sparks card, you don’t collect points with the MyWaitrose card.

Instead you receive rewards when you spend money at Waitrose online or in store.

Some of the rewards include discounts on certain brands or free coffees.

On Fridays, MyWaitrose members get 20% off selected fish from the fish counter in store. 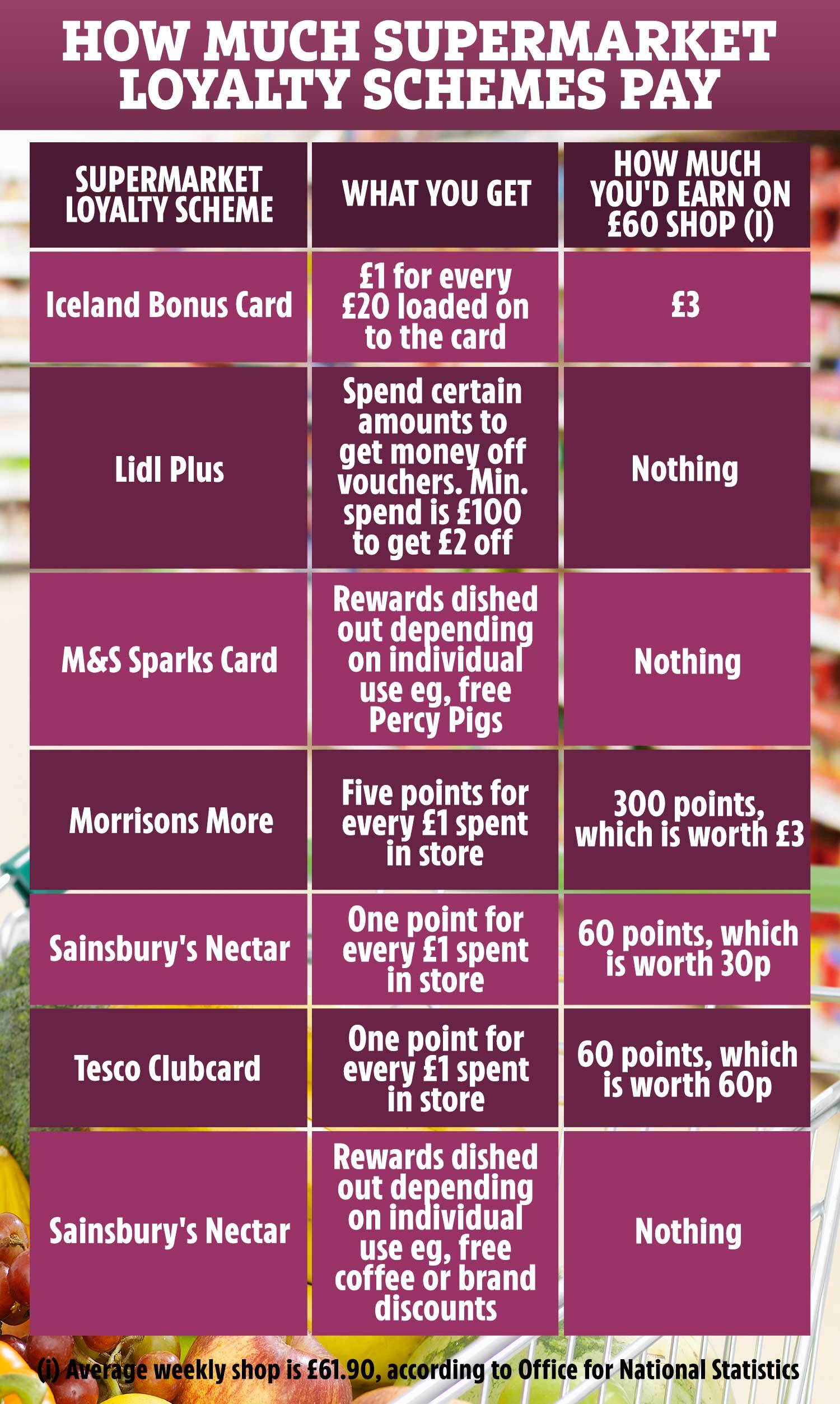 One of the longest-running loyalty card schemes, the Nectar Card was launched in 2002 after Sainsbury’s, Debenhams, BP and Barclaycard all combined their loyalty schemes under one brand.

Sainsbury’s then bought Nectar in 2018 and last year it began tailoring its offers to each customer, giving them even more savings on their shopping.

How it works is shoppers earn points when they spend money at Sainsbury’s, Sainsbury’s petrol stations and also at other retailers such as Ebay and Dulux Decorator Centres.

At Nectar’s online partner stores, you'll collect two points for each £1 you spend.

Once you have enough points you can turn them into vouchers to buy your next food shop at Sainsbury's or to buy things such as plane tickets at Expedia, train tickets from Eurostar or cinema tickets for Vue cinemas.

Just bear in mind some retailers have a minimum threshold before you can turn points into vouchers; so at Ebay, for example, you need 500 points.

Tesco’s Clubcard was launched in 1995 and, like Sainsbury’s, shoppers can earn points as they shop which can then be used to turn into vouchers for money off food or other partner schemes.

Each time you spend £1 in store and online you get one point when you scan your card or app.

You also get one point for every £2 spent on fuel.

You have to have a minimum of 150 points to request a voucher.

Once you have enough points, you can turn them into vouchers worth the face value to spend in store at Tesco, or you can triple their worth to spend at reward partners, including restaurants, and on days out.

You can request and receive vouchers within 24 hours on your Clubcard account online or on the Clubcard app.

Last year, Tesco launched the Clubcard Plus membership scheme, which sets you back £7.99 a month or £95.88 a year. It offers various of perks on top of the regular Clubcard scheme.

Meanwhile, Morrisons is cutting the cost of 400 everyday items in the latest supermarket price war.

Poundland has also launched bath bombs that leave a rainbow trail in the water.

And we've rounded up the best deals in Boots' Black Friday sale 2020.