Australia’s big business lobby has softened its opposition to individual employers mandating COVID-19 vaccines weeks after two of its members, Qantas and Telstra, decided to do just that.

The Business Council of Australia’s (BCA) new stance that states have failed to require vaccines for enough industries, justifying employers stepping in, suggests a growing belief in Australia’s corporate sector that inoculation will need to become a condition of employment for more workers. 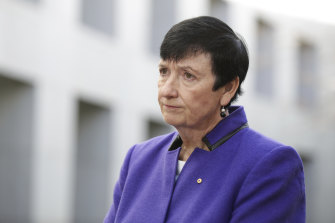 BCA, which represents most of the country’s biggest companies such as Google, McDonalds and the banks, had made plain its opposition to employers going it alone to mandate vaccines on August 13 in a joint statement with the unions.

“Employers and unions recognise that for a small number of high-risk workplaces there may be a need for all workers in a workplace to be vaccinated to protect community health and safety,” the statement from the BCA and Australian Council of Trade Unions (ACTU) said.

“These are serious decisions that should not be left to individual employers and should only be made following public health advice based on risk and medical evidence.”

Qantas announced it would mandate jabs on the morning August 18, the same time as the BCA and other groups were meeting to discuss the issue with the government. Telstra followed in early September for frontline workers.

But on Thursday’s Q+A program BCA chief executive Jennifer Westacott said her argument all along was that vaccination requirements should only “ideally” be done through public health orders.

“Now, the states haven’t gone there so that means that employers have to do that,” Ms Westacott said.

States such as NSW have mandates jabs for healthcare workers, teachers and police. All states and territories have required vaccination for aged care staff.

Ms Westacott said for employers looking to make vaccination a condition of employment should consult with staff and their unions.

“Qantas is a masterclass on this – they’ve done this extremely well,” Ms Westacott said, though its move attracted criticism from unions covering the company.

“So there are going to be circumstances where the risks are so high – health, aged care, very high-risk industries, essential services – where people are going to have to say, look, as a condition of your work you need to be vaccinated,” Ms Westacott said.

ACTU secretary Sally McManus, who was appearing alongside Ms Westacott, walked a tightrope on mandatory vaccination but also seemed to stray from the peak body’s position throughout the pandemic that only jabs mandates backed by a public health order are acceptable.

“It is a safety issue in the workplace and so in the case of other workplaces where there is no public health order, you have to assess whether or not someone who chooses not to get vaccinated poses a greater risk to the other workers and also to themselves,” Ms McManus said.

Pressed on whether companies should mandate vaccines on their own, Ms McManus said they should not, but added that: “If it is the case that there’s really good reasons and there’s no other way of keeping everyone safe, well, they might then say it is a condition of employment here.”

Ms. Marvel Is to Be First Muslim Superhero, May Appear in ‘Captain Marvel 2’

Ryan Reynolds Launches Diversity Initiative for His Next Movie: It's 'The Right Thing to Do'

Why Is Walmart Selling More Shirts Than Pants During the Coronavirus Pandemic?