In this round-up our reviewers critique movies released this week: from franchise to arthouse and independent films that deserve the spotlight. Which ones are worth the cost of a ticket?

Birds of Prey (and the Fantabulous Emancipation of One Harley Quinn) ★★★

By common consent, says reviewer Jake Wilson, one of the few bright spots in the overstuffed comic-book extravaganza Suicide Squad was Margot Robbie as the Joker's devoted girlfriend Harley Quinn – a sunshine pop variant on the usual femme fatale, with multicoloured pigtails, a Noo Yawk accent in the tradition of Tweety Bird and a girlish yen for violence and destruction. 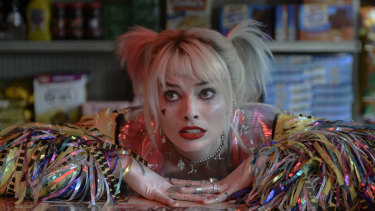 Margot Robbie steals the show as Harley Quinn in Birds of Prey.

Small wonder that Robbie's Harley now has a vehicle of her own, Birds of Prey, which finds her newly single and alone in the big city – specifically Gotham City, the fabled home to Batman, the Joker and a slew of other DC Comics superheroes and villains. For those keeping track, the film is a direct sequel to Suicide Squad, but not to the recent, more successful Joker, which was produced by the same studio, Warner Bros, but set in an alternate universe from their other DC adaptations.

If all this sounds a tad over-complicated, so is the movie, starting with the full title: Birds of Prey (and the Fantabulous Emancipation of One Harley Quinn). That gives an idea of the strained antic tone, which combines winking irreverence with a pseudo-feminist bravado left over from the heyday of the Spice Girls.

Other influences similarly derive from the late '90s and early 2000s, presumably formative years for the director Cathy Yan, a newcomer to Hollywood, as well as screenwriter Christina Hodson (Bumblebee). The fusion of pop brightness and scuzzy exploitation recalls Quentin Tarantino's Kill Bill films, though the violence is mostly conceptual rather than explicitly gory; the jumps in time are a Tarantino trick, too.

While Yan can't match Tarantino's ability to push pop archetypes to grotesque extremes, the blend of flippancy and horror can feel nightmarish, especially in a musical sequence – a fantasy within the fantasy – that pays tribute to Marilyn Monroe.

Still, it hardly needs saying that Robbie aces the role and she's not only a gifted clown, but one of the most intriguingly modern Hollywood stars. Like any film about a villain redeemed, Birds of Prey must wrestle with the question of how far the protagonist's naughtiness ought to go.

American writer-director Robert Eggers excels at transporting you into the past and putting you under the skin of those you meet there, says reviewer Sandra Hall. Persuading you to be glad that you came is another matter.

Eggers can be distinguished from those at the pulpy end of the horror movie market by his obsessive research into the customs, costumes and language of the past – and his histrionic flair. 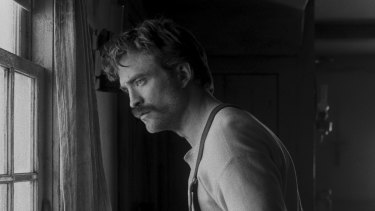 If anything, he's a bit too keen on the histrionics. The Lighthouse's opening scene is an example of him at his most excitable, promising a full catalogue of maritime terrors. A single ship is outlined against dark skies and an even darker sea while the soundtrack batters your ears with dissonant sounds presaging certain disaster. Even before Thomas Wake (Willem Dafoe) and Ephraim Winslow (Robert Pattinson) plod up the beach towards the isolated New England lighthouse which is to be their home, you know that things are about to get down and dirty. Confirmation comes when they reach the bedroom they'll be sharing and Wake asserts his territorial rights with a resounding fart.

The plot is onion-shaped. It peels away, layer by layer, as both men gradually reveal their seminal secrets. Wake is an old salt, smoked and cured by years spent absorbing sailors' tales and the lore of the sea, while Winslow spent his youth as a lumberjack. The lighthouse job was to be his way into a better-paid, more stable future but he's begun to realise the naivete of that hope. But for both men the confidences are a diversion – one more stage in the battle of wills that forms the plot's core.

Eggers' decision to film in black-and-white means the cinematography is full of shadow play, especially in the lamp-lit rooms of the tumbledown lightkeeper's cottage. But there's little suspense in any of it – partly because the outcome is inevitable. What's more, neither man has managed to generate much sympathy, so it doesn't qualify as tragedy. There is no fall from grace because there has never been much grace to lose. It's all academic.

In the foreground, H Is for Happiness appears to be a bright and sunny comedy set mostly in two locations: main character Candice Phee's unhappy but stylish home, and the multi-cultural schoolroom where she's the kid no one wants to sit next to. We can tell it's a high-key comedy from the first shot – a pullback from the wonky eye of Miss Bamford, Candice's teacher, writes reviewer Paul Byrnes. Miriam Margolyes fits the part, if not the computer-generated wobbly eye. Her style in comedy has often been to go the big bash. 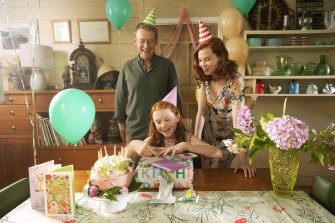 New director John Sheedy, a veteran of theatre and opera, encourages her performance as a statement of principles: if audiences need to be driven to the river of comedy and made to drink, Miriam takes us mid-stream with an anvil.

Sheedy does this partly as a ruse. It's not a straight comedy at all, but a drama with comic leavening. On that basis, it sometimes works pretty well. There are a few – a happy few – laugh-out loud moments that suggest how much potential this project might have had. The rest is a grown-up tragedy, from which 12-year-old Candice would like a break. Her mother Claire (Emma Booth) is four years into a breakdown caused by the cot death of Candice's little sister. Candice's father Jim (Richard Roxburgh) has more misery on top, after breaking with his brother Brian (Joel Jackson) over money. Brian got rich on Jim's business failure. Candice refers to him only as 'Rich Uncle Brian'. Candice's home life is about as much fun as a funeral on a wet Tuesday.

Daisy Axon, befreckled and red-haired, is well cast as Candice. She's more than a swot. When she meets Penelope Benson (Deborah Mailman), mother of her new (her only) friend Douglas Benson (Wesley Patten), Penelope recognises the girl's obsessive orderliness and precocious language. 'You're autistic, aren't you?' she asks, gently. Candice demurs, politely. Given that Douglas thinks he is from another dimension in time, she feels reasonably well-adjusted.

Sheedy never finds the right tone for this ambitious project. Candice's florid language is great on paper, one of the main attractions of the book, but it's almost impossible to translate to the screen. H is for Happiness is amiable, even quite likeable, just not good enough to compete against much bigger and better-funded foreign movies.

The source material for this film is a 1927 horror story by H.P. Lovecraft, whose vision of a cruel universe ruled by malignant forces seems more popular than ever just now, writes reviewer Jake Wilson. South African writer-director Richard Stanley's adaptation retains the outline of Lovecraft's plot and some of his heavily ominous language, while reimagining the characters for the present day. 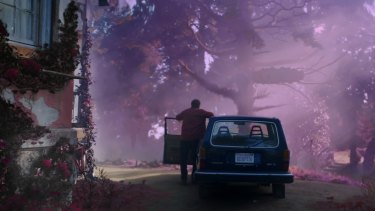 Hue’s next? The colours of the movie change as the alien force takes control.

Newly arrived in the woods of Massachusetts are the Gardners, an ordinary American family with some reasonably ordinary problems. Following a mastectomy, Theresa (Joely Richardson) fears her husband Nathan (Nicolas Cage) no longer finds her attractive.

But all these problems dwindle into insignificance when a meteor crashes in their front yard, possibly summoned by Lavinia's spells. This proves to be a vehicle for an abstract alien entity – the "colour" of the title – that has the power to cause mutations and to warp reality itself.

Like other films inspired by Lovecraft, Color out of Space faces the problem of how to portray a vaguely described menace that supposedly resembles nothing on Earth. Stanley's solution involves a degree of explicit "body horror," but he equally counts on his actors to look appropriately stupefied as their characters learn the nature of the threat.

Cage in particular is very much in his element, proving his reputation as an undisciplined weirdo is less than deserved. His performance is one long freakout, but a carefully calibrated one, escalating as the situation deteriorates.

Waad al-Kateab is worried that her baby Sama never cries. After all, she has plenty to cry about, says reviewer Sandra Hall. It's 2016 and she's been born into a world that seems about to end under the bombardment inflicted on the rebel-held areas of East Aleppo by Bashar al-Assad's allies, the Russian air force. 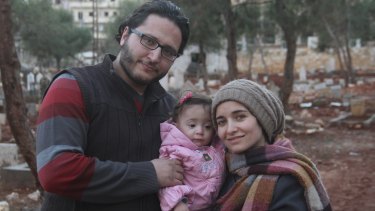 Sama's father, Hamza, is a doctor in the district's only remaining hospital and Waad is a self-taught citizen journalist whose footage is being shown regularly on one of Britain's major television networks. The family once had a house but now they live at the hospital – part of a tight little band of medicos who are holding out in the besieged city while they still have patients left to treat.

Waad shot 500 hours of film during the six months the siege lasted – at first with her phone, then with a succession of cameras that she learnt to operate by using them.

For Sama is fashioned as Waad's gift to her daughter. It's both a tribute and an apology to the child for her parents' decision to keep her with them throughout all they endured. It's also a terrifying day-by-day re-creation of what it was like to live at the bloody core of the Syrian war. The Russians made a habit of targeting hospitals and Waad kept her camera rolling no matter what.

It jerkily records the frantic dashes she and the others made to reach shelter before each bombardment. And there are the scenes she shot in the operating theatre, tucking herself into a corner to film the surgeries Hamza and the other doctors performed on the wounded.

She records their despair when a family of 10 are brought in dead and their sadness when they lose one of their own. Only once does her sangfroid fail her. She's reduced to tears by the sight of a boy they are trying to save, causing Hamza to order her out with the words: "You can't cry in here."

The film has just been named Best Documentary at the BAFTA film awards in London, where Waad made a fervent speech on behalf of those now fleeing the Syrian bombardments, and the film also stands a good chance of winning an Oscar – as it should.