A 22-year-old Chicago man was running from police, had his back turned, and appeared to have a gun in his hand when he was fatally shot by police last month, according to videos released by the city’s police oversight agency on Wednesday.

In body camera video, officers can be heard ordering Anthony Alvarez to drop a gun as he attempted to run away on March 31. Video from a doorbell camera at a nearby home appears to show Alvarez with a gun in his right hand. An officer fires his weapon several times, killing Alvarez.

The officers at the scene call for backup and begin administering first aid to Alvarez. One officer says, “Stay with me, man. Stay with me.”

After the shooting, police shared a photo of a firearm recovered at the scene. The officer who shot Alvarez has been identified as Evan Solano, 30, who has spent more than six years with the city’s police department. 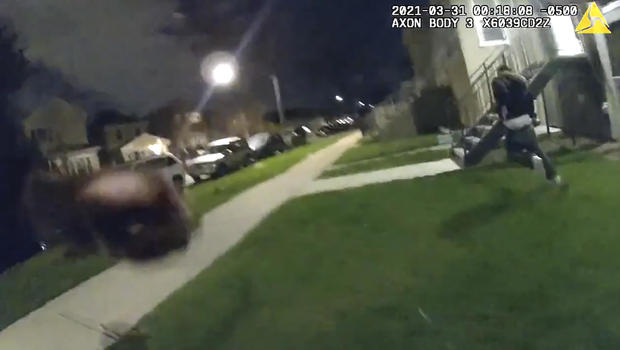 Earlier Wednesday, Mayor Lori Lightfoot said the chase began as a traffic violation. “We can’t live in a world where a minor traffic offense results in someone being shot and killed,” Lightfoot said. “That’s not acceptable to me, and it shouldn’t be acceptable to anyone.”

The mayor has called for reforms to the Chicago Police Department’s foot pursuit policy following the fatal police shooting of 13-year-old Adam Toledo. She reiterated this in a joint statement with the Alvarez family.

“This tragic event provides further motivation for the expediency for reform to the City’s foot pursuit policies,” the statement said. “We ask that all continue to respect the Alvarez family’s right to privacy as they grieve during this incredibly painful time.”

Colleen Connell, the executive director of the ACLU’s Illinois chapter, called for transparency throughout the investigation and said Chicago residents deserve “meaningful changes to policing.”

“They deserve a new policy on foot pursuits that is informed by community voices and driven by community needs – and one that actually results in changes in how police officers treat human beings,” Connell said in a statement. “This is but one step in creating a Chicago Police Department that serves all Chicagoans, including Black and Brown people.”

Anna Duggar to Counting On Fans: Stop Talking About My Baby Bump!

5 Seconds Of Summer Deliver Stellar Performance Of ‘Youngblood’ At MMVAs