‘Hell hath no fury like a minor Tory PA scorned’: Bodyguard fans blame sacked aide Chanel for Julia’s death- after claiming to spot her on screen moments before the bombing

Fans of the BBC’s nailbiting thriller the Bodyguard are convinced they’ve solved the mystery of the bomber who killed the home secretary, after apparently spotting her sacked PA in the background of a scene.

On Sunday night viewers discovered that Julia Montague had been killed after a bomb went off as she delivered a speech on her controversial RIPA-18 bill at St Matthews’ College.

The prime suspect is currently her aide Tahir Mahmood who entered the auditorium with a suspicious briefcase, but some fans are convinced they spotted her former PA Chanel Dyson at the side of the stage moments before the explosion.

Chanel was left fuming in episode one when she was unceremoniously sacked by Julia, and unsuccessfully tried to sell a story about her to a journalist.

Others pointed out that after being sacked, she was driven off in Range Rover by a man who later appeared at a Veteran’s Peace Group run by Andy Apstead, who later attempted to kill Julia in a sniper attack before turning the gun on himself. 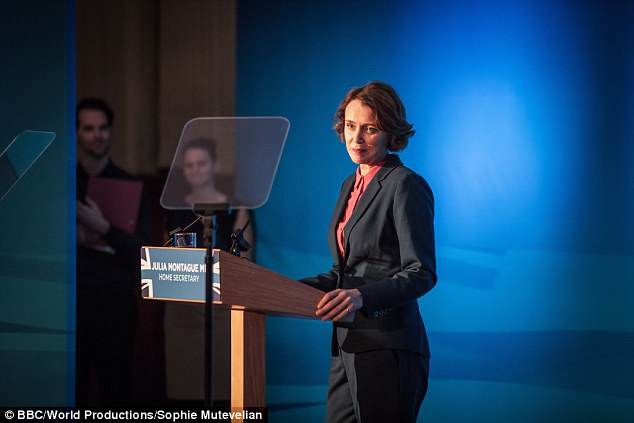 Fans are convinced they spotted home secretary Julia Montague’s disgruntled former aide Chanel at the side of the stage as she delivered a speech, moments before a fatal bombing 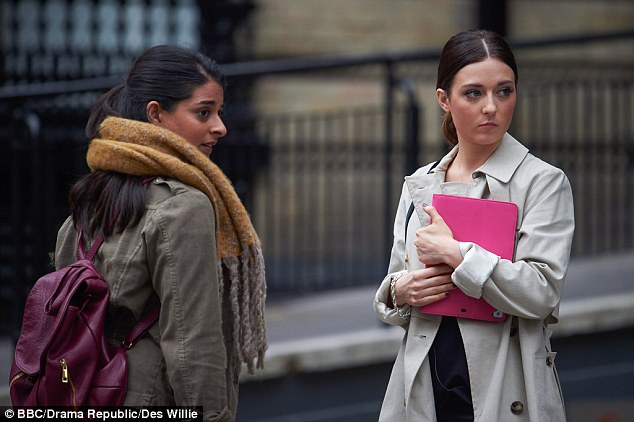 Some have also noticed despite only being on screen in episode one, Chanel is listed as being in all six episodes of the show in IMBD.

And another fan said that a woman who came in late to the speech looked like it could be Chanel wearing a wig.

‘Chanel in the Range Rover is 100 per cent behind Julia’s death in Bodyguard,’ one tweeted. Hell hath no fury like a minor Tory PAD scorned,’ one viewer tweeted.

Another wrote: .My plot theory is sacked aide Chanel is MI5 agent. 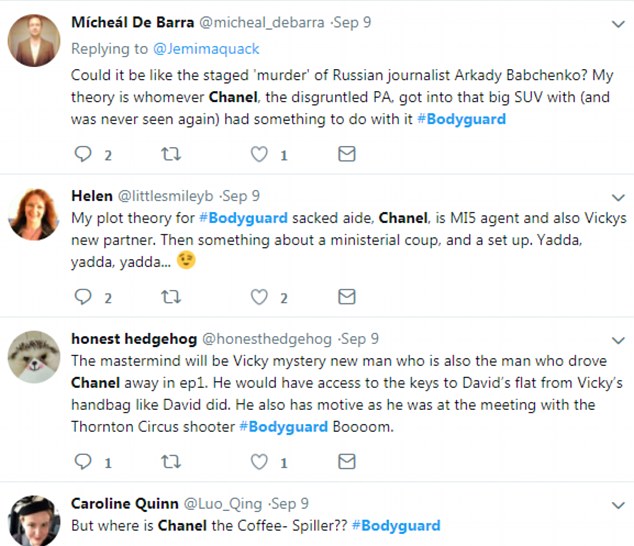 Fans are convinced that Julia’s former aide Chanel has something to do with the fatal bombing, with eagle-eyed viewers spotted that she’s listed on the cast for all six episodes

The terror thriller has already become the biggest new drama on British television in more than a decade, the BBC has said.

The BBC One series – starring Keeley Hawes as the Home Secretary and Richard Madden as the officer assigned to protect her – has achieved consolidated viewing figures of 10.4 million for its first episode.

This is the highest launch figure for any new drama across all UK channels since 2006, the corporation said.

The series, written and created by Line Of Duty’s Jed Mercurio, kicked off on August 26, when it scored the highest overnight audience for a drama launch this year by more than one million viewers.

Man who claimed landlord was in Freemasons paedophile ring is jailed