We talk a lot about dystopias these days. We’re living in a world where The Handmaid’s Tale feels less like fiction and more like a dire warning of things to come. And dystopias are important, even when they don’t come true — they engage with our cultural anxieties, our values, our fear of being forced to wear unflattering red capes and lose all of our bodily autonomy to patriarchal forces. Dystopias are grim for good reason.

But with all this talk of wretched futures, let’s not forget the dystopia novel’s grandmother, the good ol’ fashioned utopia novel.

We still have utopian fiction in a few corners of our modern media. Shows like Star Trek imagine a future where life on Earth is so chill that humans must venture out into the cosmos to find danger and moral quandaries. For the most part, though, there’s not too many contemporary books about utopian societies, because they just feel too darn corny these days. Too impossible. Too irrelevant to modern life.

That is, until you crack open the 1915 feminist utopia novel Herland by Charlotte Perkins Gilman and realize that… it still sounds pretty good? It’s not perfect, by any stretch of the imagination — Gilman’s perception of an "ideal society" is still the product of a white feminist writing in 1915 — but her vision of a world without men might be worth a second glance. 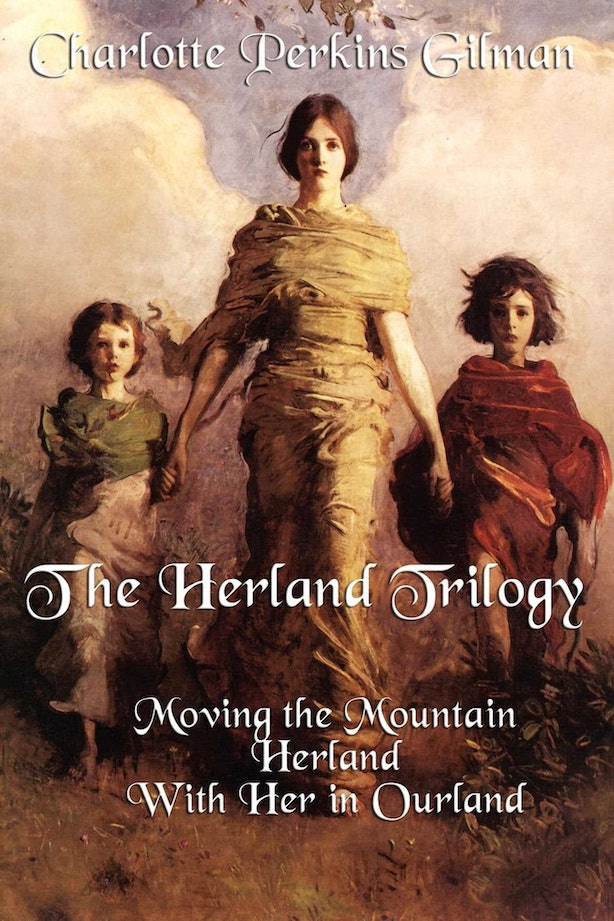 Herland follows three dudes from our "modern" world of 1915: Van, Jeff, and Terry. These boys are exploring a remote plateau surrounded by jungle, because American writers of the early 1900’s were convinced that all jungles were teeming with lost civilizations and dinosaurs and whatnot. Sure enough, our boys are soon captured and chloroformed by a team of beefy women.

They wake up in Herland, an all-woman society where ladies have learned to procreate without male contribution. These woman are all athletic and intellectual. They don’t perform femininity in the ways that the boys expect them to, because they don’t have to deal with the male gaze. They have no concept of the gender binary. They’re all rocking bob cuts and ripped arms, they’re all vegetarians, and they’ve abolished private property to all live as one giant, happy family. It sounds like a pretty choice society.

Van and Jeff get on board after a little while, even falling for Herland girls. Jeff still has an air of chivalry, falling over himself to gallantly "respect" the ladies while ignoring that most of them can bench press his body weight. But Van actually starts to get it after a while, coming to understand that gender is socially programmed nonsense designed mostly to make men feel better about themselves, with very little basis in biology:

Terry, however, continues to be the worst. He refuses to get on board with everyone else and their advanced understanding of gender. He insists that these women should "act more like real women." And that’s where the plot kicks in: he, too, marries a woman from Herland, and then tries to force himself on her physically, because it is her "wifely duty" to never turn him down. The government of Herland sends him to trial immediately, and exiles Terry from their country, putting an end to the novel (Van and his wife go with Terry, because Van is still a little bit the worst, too).

As a feminist fantasy, Herland hits a whole lot of distressingly relevant points: women aren’t beholden to the patriarchy. Motherhood is not seen as a hindrance to a political career. Everyone eats clean and shares and sexual assault charges are processed in a timely manner. A low bar to clear, as far as fantasies go, but still a vast improvement.

Basically, Herland is like the beginning of the Wonder Woman movie, before Chris Pine shows up to ruin everything.

And then, of course, we come to all the parts of Herland that have not aged well. Charlotte Perkins Gilman herself was a straight white feminist, and it sure shows. Her book completely ignores race and sexuality (I guess we’re supposed to assume that all these ladies are living together in celibacy?). Her real life advocacy was mostly limited to rights for straight, middle class white women like herself. The Herlanders seem to get pregnant spontaneously, with no abortion options (yikes). There doesn’t appear to be much room in this fantasy society for women who don’t want to be kick ass working moms.

But Gilman has allowed for the fact that she’s probably wrong about a lot of things in Herland. I mean, If J.K. Rowling’s Twitter feed has taught us anything, it’s that an author does not have all that much control over how people are going to understand her work. The true appeal of Herland is not just that it’s a peaceful society, or that women are permitted to live without conforming to gender norms. It’s that the women of Herland don’t care at all about preserving tradition. They want their children to grow up and think differently than they do. They want their society to move past their own values:

So perhaps Herland is a product of 1915. It’s still relevant in some places, deeply outdated in others. But, for all of its clunky prose and its glaring flaws, Herland reminds us that we can (we should) take the best from the feminist utopias of our past, and discard the rest as we forge a better future: "We do things FROM our mothers—not FOR them. We don’t have to do things FOR them—they don’t need it, you know."

‘The Young And The Restless’ Spoilers For Tuesday, June 26: A Major Heath Crises For Victor!