Caretakers at Audubon Zoo in New Orleans are hand-raising their newest primate pal with round-the-clock attention — and it’s attracted some attention.

A Sumatran orangutan infant — a member of a critically endangered species — is being bottle-fed at the New Orleans zoo after his mother experienced complications in producing milk, the Associated Press reported.

The unnamed baby ape was originally being tube-fed until Jan. 13.

Now the infant is receiving constant care from zoo staffers decked out in furry vests for him to cling to as they tend to him.

Twelve-year-old orangutan and first-time mother Menari gave birth to twins on Christmas Eve, but one of the infants was stillborn.

The lone survivor started showing signs of weakness and a lack of nursing days later. 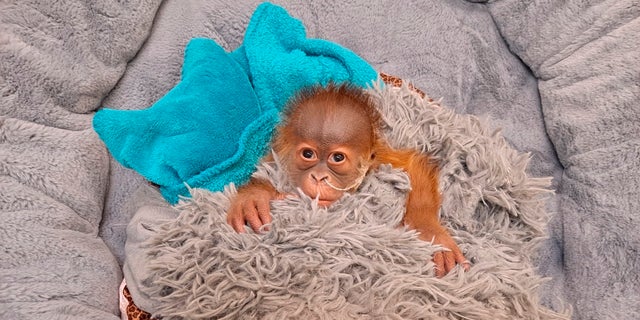 Since the infant has been taken into the zoo handlers’ care, he’s been eating well and now weighs 4.35 pounds, according to Bob Lessnau, Audubon Nature Institute’s vice president and general curator.

The International Union for Conservation of Nature has considered the species of great apes, known for their long red hair, endangered since Sumatran orangutans face threats such as hunting and forest and peat swamp destruction.

Lessnau said in a statement that the baby is being exposed to other orangutans for six to seven hours every day.

The group of apes seems to be most intrigued with their newest addition during bottle feedings and diaper changes.

Two-year-old orangutan Bulan, the oldest of father Jambi’s three, is “especially interested in the new little guy,” according to a Jan. 13 statement.

Audubon Zoo senior veterinarian Bob McLean shared that Menari is currently being given a drug that can help maintain lactation.

Experts from the Children’s Hospital of New Orleans have also been brought in to help find ways to stimulate the baby’s suckling.

“We don’t know if she [Menari] will maintain or restart lactation if we have a successful reintroduction of the infant to her,” McLean said on Wednesday.

But there’s still hope for Menari.

She, too, was hand-raised and was successfully reintroduced to her mother at eight months, according to Audubon’s senior veterinarian, Bob MacLean.

Sumatran orangutans aren’t weaned until they’re about 7 years old, and females have the longest period between births of any mammals — 8.2 to 9.3 years, according to the International Union for Conservation of Nature.