When Fight Club meets the nightclub! Boxing studio launches new initiative to encourage gay men to pick up a pair of gloves to banish ‘hostile’ image of sport

A London-based boxing studio has introduced a new campaign to encourage gay men to visit in the bid to break down stereotypes surrounding the sport.

Kobox Boxing Club has launched its PROUD campaign encouraging gay men to pick up a pair of gloves and help break down stigmas.

Boxing clubs are, by some, still seen as ‘hostile’ and ‘intimidating’ environments to work out in with gay men in particular feeling ‘uneasy’.

However, in the run-up to London Pride in July, Kobox has launched its PROUD campaign with a hard-hitting video, showcasing the isolation and exclusion some gay men may feel when thinking about taking up the sport. 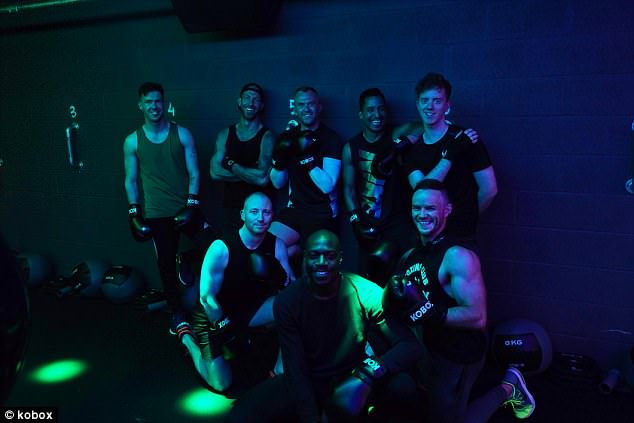 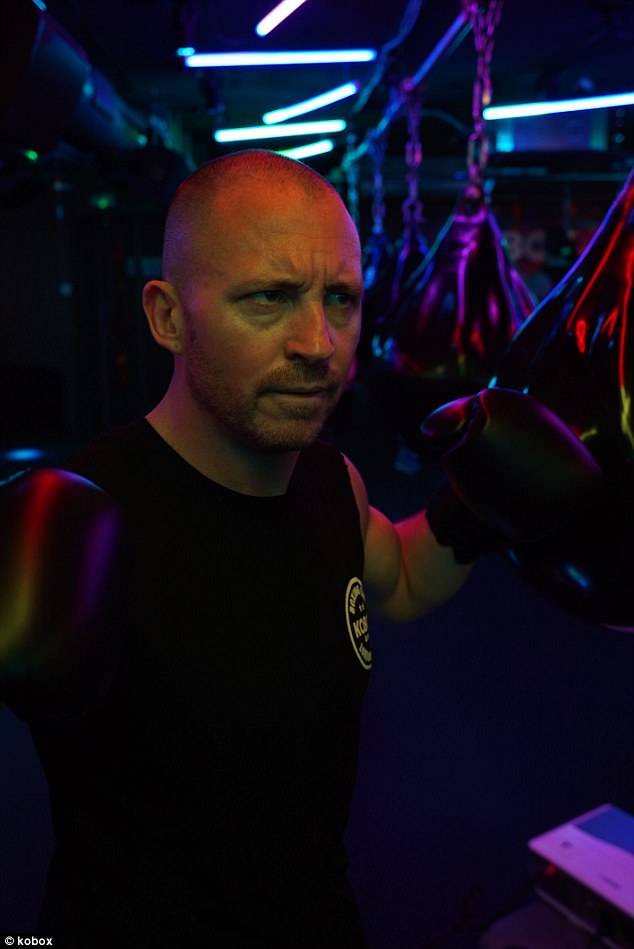 Larry Meyler (pictured), author of Being Brave, said that as a child he was all too familiar with the ‘brutal’ environment that comes with boxing

The club, which has a ‘Fight Club Meets Nightclub’ mantra and has a 70-per-cent female-dominant clientele, filmed the video in an effort to address the stigmatisation some gay men feel when thinking about getting into boxing.

One man who knows all too well the very real intimidation that comes with boxing clubs is Larry Meyler, author of Being Brave, who described the environment as ‘brutal’.

He said: ‘I boxed for a short time when I was in my very early teens and I know the boxing gym, more than most other kinds of fitness environments, can be a brutal and intimidating place.

‘I myself am from a council estate, so I’m used to more of a raw and fighting environment than some… but it still conjures feelings of anxiety thinking about attending a boxing gym as a gay man.

‘When I was in primary school, I had to look after myself… I guess I was classed as a bit of a hardnut, but that all changed leading up to my teenage years.

‘Most of my best friends were girls, and I got constant stick for it. Gay this… gay that… and I let my fears overwhelm me. It was a complete 360 and I avoided any sort of conflict like the plague.

He added: ‘You’d have gay slurs chucked at you here and there, and it all gets into your psyche one way or another. I guess the thought of getting into boxing for most gay men may reignite any feelings of anxiety and inferiority, so they may just avoid it.’

Larry also said that the opportunity to take part in the campaign had helped him redefine his feelings surrounding the sport.

He continued: ‘Being able to embrace boxing the Kobox way strengthens that little fighter in me.

Being part of this campaign is hugely important to help fuel that fire in anyone who is made to feel the lesser.

‘You don’t choose your sexuality, and people who think you do need a serious education.

‘My sexuality doesn’t define me and it never will, I don’t subscribe to ‘boxes’, I’m proud of who I am and I want every other girl, boy, or however you identify, out there to feel proud, too. 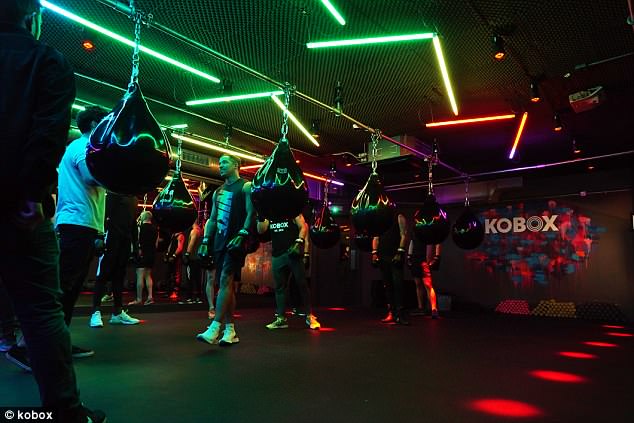 The club is hoping to banish the ‘hostile’ and ‘intimidating’ stigmas surrounding the sport, reiterating that all are welcome at Kobox

‘So get in that gym and punch that bag with all your f***ing might, because you deserve to be there, too.’

A host of names feature in the video – which is led by creative director Jerry Reeve – including showbiz journalist James Ingham, TV producer Joff Powell and comedian and TV presenter James Barr.

Renowned choreographer Jerry, best known for his work on The Voice, says: ‘I love the fact that KOBOX is doing this campaign.

‘It will help break stereotypes and lead towards the change in perception of certain sports.

‘I didn’t know what to expect going into KOBOX for the first time, but I came out smiling, sweating and chuffed that I learnt a new skill set. With the tunes, diverse workouts and sexy studios, it’s hard not walking out feeling like you’re Tyson.’

Showbiz journalist James Ingham, says: ‘I recently trained for a celebrity boxing fight, which brought back lots of childhood insecurities about my sexuality that I thought I had dealt with.

‘When I first considered boxing, I really didn’t want to go down to a boxing gym – I felt I would be judged by the predominantly straight male boxers with the huge levels of testosterone.

‘It brought back a lot feelings I’d experienced at school, and other points during my life. 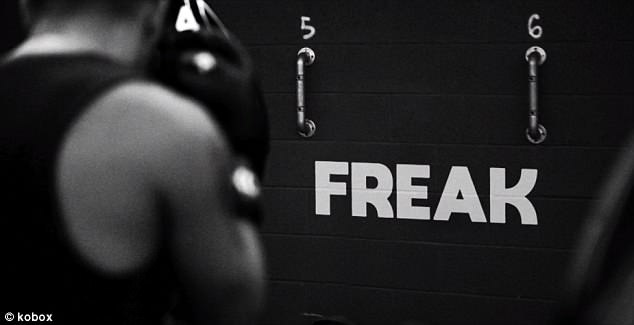 A new campaign video, created ahead of Pride in London highlights the insecurities that some gay men feel when taking part in boxing 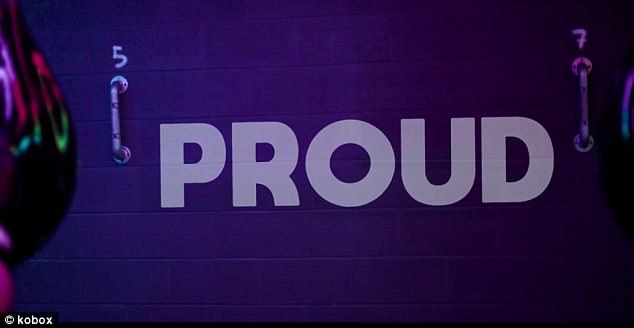 ‘I hated football at school, and being involved in group sports. Whenever we were allowed to do something else, I always wanted to do cross country so I could be on my own and stay out of the group.

‘I always felt intimidated by straight kids, and I’ve always known I was gay and felt that was ‘wrong’.

‘I grew up trying to portray an image of being this big strong confident guy, but anyone who knows me well knows I’m the biggest softy there is – something you don’t necessarily think fits in down a boxing gym.

‘But in complete contrast to my initial reservations, KOBOX offered a challenging training workout in a relaxed, fun, mixed environment. There was no intimidation, no agenda.

‘What I love about the club is its message of fun fitness for all. Everyone is welcome – whatever your sex, sexuality or level of boxing experience.’

Kris Pace, brand director, says: ‘The lack of gay men participating in boxing, and boxing-related fitness, has needed to be addressed for some time now, and we felt this was a profound way to deliver a clear message to everyone within the sport.

‘We spoke to a lot of our gay friends and relatives about starting a campaign, as well as Attitude magazine, and together we decided to make a stand for the community through KOBOX.

‘No one should feel intimidated coming to a boxing class at KOBOX, or any other gym for that matter. Any perception that gay men aren’t welcome at a boxing club is outrageous.

‘The thought of anyone feeling isolated or uneasy for wanting to learn to box is something we wanted to pinpoint in the video, and I think Jerry conveys these emotions with complete authenticity, because it’s a pain real to him and many other gay men.

‘We welcome anyone through our doors, from any walk of life, and the LGBT community is, without question, absolutely a part of that.’