Professor Brian Cox left This Morning viewers scratching their heads today after making a bizarre claim that humans ‘might be holograms’.

The British physicist, 53, appeared on the programme to promote his new live tour Horizons: A 2021 Space Odyssey, which will explore profound questions such as how the universe began.

While discussing the role of black holes in the evolution of the universe, Brian claimed the universe ‘might not be at all the way we perceive it to be’ and suggested we could all be holograms – but failed to elaborate before host Ruth Langsford moved the conversation on.

Viewers were unsurprisingly confused by the theory, with one calling the moment the ‘best thing to happen’ on the show so far while another joked that someone should come and ‘turn them off’. 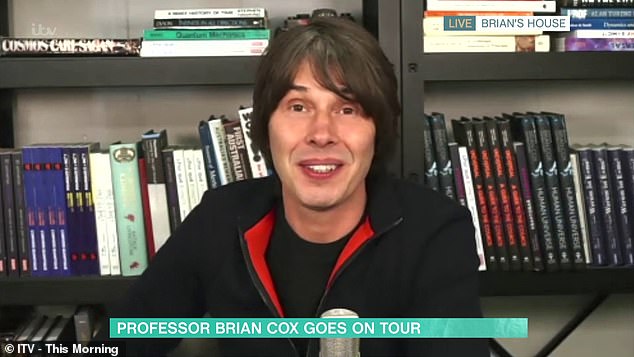 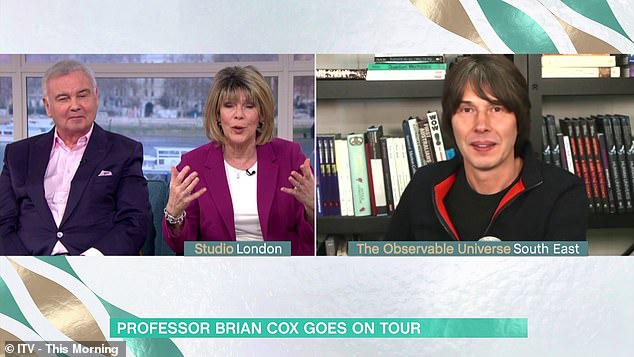 The British physicist, 53, said the ‘universe might not be at all the way we perceive it to be’ – but gave no other explanation before host Ruth Langsford quickly moved the conversation on

The scientist says his new tour will explore the biggest questions humanity asks, such as ‘why does the universe exist?’ and what the ‘fundamental nature of reality is’.

He went on: ‘By studying those and answering the questions that Stephen Hawking asked over 50 years ago, we’ve come to the conclusion – and I’ll just say it out loud and then I’ll stop – that we might be holograms.

‘That the universe might not be at all the way we perceive it to be.’

Viewers were suitably confused by the theory, with one calling the moment the ‘best thing to happen’ on the show so far while another joked that someone should come and ‘turn them off’

Host Ruth, 61, was stunned by the claim and told Brian: ‘You’re blowing my mind now. I was never good at science at school and I’m trying really hard to follow you and keep up here, but that is mind blowing.’

As the segment drew to a close Ruth brought up the subject again, saying to the professor: ‘Brian it’s always fascinating to talk to you, mind-boggling, I’m now thinking, am I a hologram?’ to which Brian quickly replied: ‘Yeah, you probably are.’

Viewers were baffled by the theory, which came with no other explanation, with one writing: Full on called Ruth a hologram! Love it’

Bemused viewers were desperate for an explanation, with one asking: ‘As if @ProfBrianCox has just said we are holograms on This Morning.’

Another teased: ‘Yup. Holograms would explain my ghosting boyfriend lol.’

‘I’m a hologram great… Can somebody please come and switch me off. Cheers,’ joked another user.

Diane Abbott tells how she copes with receiving hate tweets

Family had a mini pub built in their garden during lockdown

Gmail update: The feature fans have been waiting for could release very soon