We are all familiar with the moment in Willy Wonka and the Chocolate Factory when the titular chocolatier welcomes his group of prize winners to the chocolate room. As the children and their parents gape in wonder at the edible beauty before them, Gene Wilder begins to sing Pure Imagination and lets his charges loose to stuff their greedy little faces and begin the exciting journey towards diabetes. It’s one of cinema’s most memorable scenes.

Entering Lego Masters’ Brick Pit isn’t exactly like that – Ryan “Brickman” McNaught doesn’t sing and nothing in it is edible unless you’re seriously up for a challenge – but the feeling I get when I gaze with wild surmise upon the treasures of the pit must be akin to what Charlie Bucket felt when he realised it wasn’t to be cabbage soup for dinner tonight. 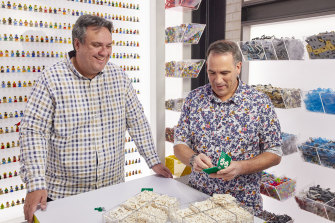 Ben Pobjie, left, and Ryan “Brickman” McNaught in the Brick Pit, a world of pure imagination.Credit:Nine

Before entering the Brick Pit, I walk past a spectacular mountain landscape – an illustration of the wondrous possibilities offered by the magical room’s contents, a reminder that nothing is beyond the scope of Lego as long as you have enough pieces.

The Brick Pit holds around three-and-a-half million bricks, which one imagines would be enough to fulfil anyone’s architectural or geographical fantasies. They’re called “bricks”, but the array goes way beyond the old-fashioned colourful blocks: wheels, weapons, joints, musical instruments, hot dogs, fishing rods, eyeballs, animals and plants are all available and ready to be pressed into service.

Then, of course, the human touch: the minifigs. Lego’s army of tiny people from every walk of life, with every conceivable expression, as enabled by the large bucket of disembodied heads that the Brickman gestures to casually as he conducts the tour. There are many contexts in which a bucket of heads might be viewed as slightly macabre, but in the Brick Pit it’s simply adorable.

“There’s every emotion you can possibly imagine in the faces and the heads,” Brickman informs me, opening up infinite storytelling possibilities for the contestants.

It stands to reason that if Brickman is Lego Masters’ mild-mannered Willy Wonka – sans the nightmarish boat ride – he must have a loyal team of Oompa Loompas to assist him, and so he does. I’ve arrived during a break in shooting, but the pit is a hive of activity as the Lego Masters assistants go to work, replenishing and tidying up the space. 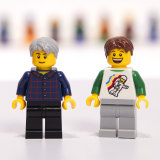 Ben and Ryan in minifigure form.Credit:Nine

“The team are constantly refilling these all the time,” says Brickman. It’s also important to make sure that the needs of the contestants are anticipated when filling the pit. “As Lego Masters has evolved over time, all these contestants in the show now have seen the others, so they’ve kind of gone up a notch, they’ve put more demands on it, so we’ve had to be quite overarching in making sure we’ve got enough pieces for them.”

On top of that, every year Lego adds about 1000 new elements to the Lego line-up, meaning the show has to ensure the pit is kept up to date – and that in a few years Lego will be the most common substance on the planet and all of us will have sore feet.

It’s thrilling to be in the nerve centre of Lego Masters, the very spot where I have seen so many brilliant, panicked artistes scoop up enormous handfuls of coloured bricks without any clear idea of what they’re going to do with them. It’s a place that can boggle the mind. “We had one particular contestant,” Brickman recalls, “when she came in here she freaked out, it was like, too much to choose from.” That’s the danger of infinite choice: he whom the gods would drive mad, they first allow access to three-and-a-half million pieces of Lego. 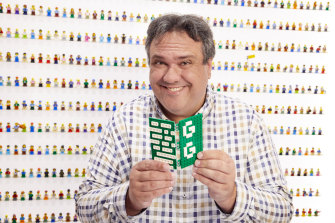 Ben with the Green Guide created by the Brickman.Credit:Nine

But as thrilling as getting inside the Brick Pit is, it’s as nothing compared to the electric jolt of excitement when the Brickman actually begins to make something in front of my very eyes. It’s like getting to see Michelangelo paint, or Phil Collins drum – seeing an artist at the peak of his powers create before you. As it takes shape I try to discern the object: a flat green base … a hinge … white lines forming … letters …

Suddenly it becomes clear: Brickman has made a Lego Green Guide. Just for me. And I didn’t even have to return the Everlasting Gobstopper. I take the gift with reverence and awe: it will be my most treasured possession, a reminder of the day I stepped into a cave of wonders and saw laid out before me the stuff of which worlds are made.

Find out the next TV shows, streaming series and movies to add to your must-sees. Sign up to get it every Thursday.

NHS sets up 69 clinics to treat patients with long-Covid