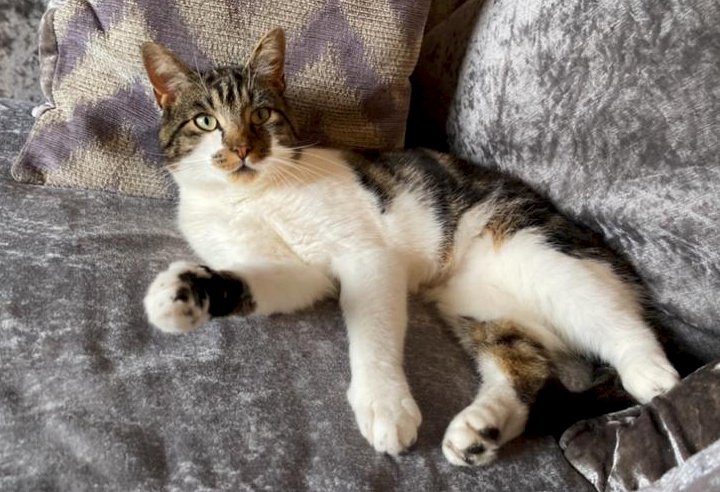 They say that cats have nine lives, but this cat has used up at least three of his after surviving multiple shooting incidents.

Two-year-old moggy Teddy has been dubbed The Purrminator after he managed to walk away from a trio of separate shootings five months apart.

Owner Lauren Williams, 27, was left horrified when her pet puss was first targeted in January this year when he was blasted through the tail.

He was then shot for a second time later that month before being attacked again with gas-powered air weapon on May 5.

The latest attack saw rescue cat Teddy blasted straight through the stomach – but incredibly the bullet missed all his vital organs.

Teddy was taken to the PDSA pet hospital in Birmingham where he was placed on an IV drip and received treatment for his injuries.

He is now back at his owner’s home in Wordsley, West Midlands, after making a miraculous recovery.

Mum-of-one Lauren said: ‘He really is remarkable to have survived and he can’t have many of his nine lives left.

‘It is frightening to think someone would do that to that animal like Teddy, it’s awful and cruel.’

The first two shootings left marks on Teddy’s tail, but it was the most recent attack that saw the poor cat facing life-threatening danger, as it went right through his stomach.

‘He must’ve been shot nearby to make it back into the garden where I found him,’ says Lauren.

‘He couldn’t move and was lying in a puddle of blood, there was a lot of blood He was crying out to me, it was heart-breaking.’

Lauren’s mum believes this was from a gas gun, although vets said it was too risky to opt for surgery to find out the type of bullets used.

Support worker Lauren also believes the offender must live local, as Teddy has managed to make his way home after each shooting.

She has contacted police about the attacks and is appealing to anyone with information to come forward.

She added: ‘It has to be someone who lives very local as Teddy wouldn’t have been able to get back home with his injury being so bad – and he doesn’t venture far.

‘He is quite a friendly cat I do wonder if this time someone beckoned him towards him and shot him at close range.

‘The other times it seems more likely he was running away because he was hit in the tail.

‘This time the bullets missed his vital organs by centimetres and I’m worried the next time might be his last chance.’

Police officers who visited Lauren for their enquiries told the owner that the culprit could face up to five years in jail for the crimes thanks to new anti animal cruelty laws.

Lauren said: ‘I only rescued him in December when I moved in the house so I had him for Christmas.

‘It’s awful and disgusting that someone would do this to him and the person responsible needs catching.’

After Lauren shared Teddy’s story on social media, messages of support poured in.

One person wrote: ‘That is one hard as nails cat right there. Should rename him Purr-minator. No matter how many times he gets shot, he just comes back for more.’

Another added: ‘That is beyond cruel. But you’ve definitely got the hardest cat in the country right there. Get well soon Teddy.’

He has thankfully made a full recovery, but Lauren is hoping that the person who injured her beloved pet is caught and convicted.

And, most importantly, that Teddy and other cats in the area will not be attacked again.

Get in touch at [email protected]