Put another log on, won’t you? Brits are spending thousands installing trendy outdoor ‘wall fires’ so they can keep socialising under Tier 2 rules – after patio heaters sales soared 400%

The government’s Tier 2 lockdown restrictions have already seen Britons snapping up pub-style patio heaters ahead of a winter of outdoor entertaining.

Now, according to The Sunday Times, well-heeled souls determined to keep partying have turned their attentions to trendy £3,000 outdoor ‘wall fires’, after patio heaters and fire-pits began selling out.

Residents currently living in areas hit by the second-harshest lockdown level are banned from mixing indoors and can only meet with people from different households when outside in groups of six or less – ensuring a lonely winter ahead for many.

However, for those in the business of outdoor heating, there’s currently a rosy glow around their latest sales figures. 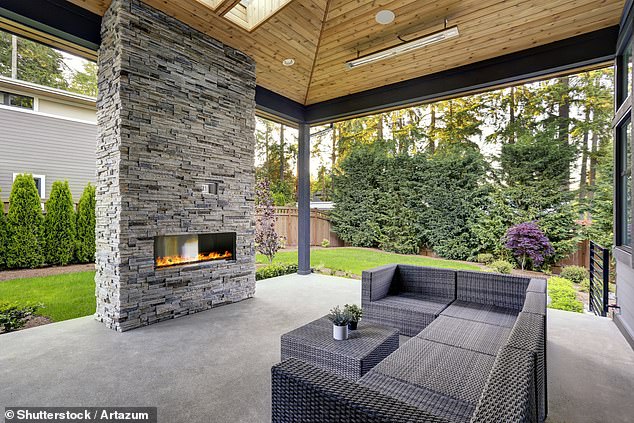 Tony Young of Urban fires in North London claims sales of outdoor fireplaces, which sit on a bracket mounted to your patio wall, are now also booming.

He said interest had gone ‘through the roof’ since the introduction of the new restrictions.

Sales of outdoor firepits are already up 22 per cent, and are expected to jump to a further 35 per cent by the end of the year.

The demand for patio heaters and fire pits soared as people desperately tried to get themselves ready for outdoor entertaining under new coronavirus restrictions, implemented earlier this month. 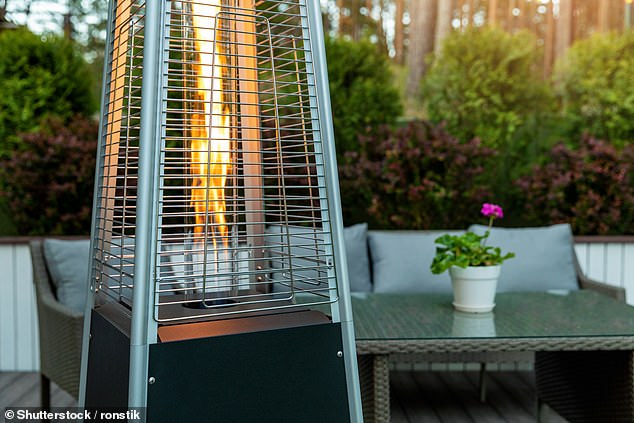 The demand for patio heaters and fire pits have soared as people desperately try to get themselves ready for outdoor entertaining under new coronavirus restrictions. (Stock image of a patio heater)

As such, outdoor furniture businesses saw a rush for patio heaters and fire pits – with one company telling FEMAIL it’s experienced a 400 per cent increase in sales on previous years.

Social media users have also admitted to urgently purchasing the devices since Boris Johnson announced the high alert level measures , with one person joking: ‘Patio heaters and fire pits… Take all my money!’.

Tier 1 restrictions, which half of England are under, are believed to mirror the rules currently in place across the country.

It includes the rule of six, which is the measure that only groups of six or less meet together, a 10pm curfew and group sport to be played outdoors only.

Under Tier 2 restrictions, households are also banned from meeting indoors, even in hospitality venues.

Two households are allowed to socialise outdoors but must stay within the six-person limit and adhere to social distancing.

This means keeping two metres apart where possible, or one metre with extra precautions in place, such as wearing face coverings or increasing ventilation indoors.

Tier 3 regulations have seen restaurants close at 10pm, pubs and bars being ordered to close and households have been banned from mixing indoors or outdoors.

Locals are advised to only leave their areas for essential travel, including work and education, and overnight stays outside of ‘high’ risk areas are banned.

‘The rise is a 400 per cent increase on previous years and the majority of customers seem to be commercial establishments gearing up to welcome customers outdoors over the colder months.’

Mike Powell, Director Neo Direct, who are specialists in appliances and home furniture, told FEMAIL they have seen a 300 per cent increase in sales of outdoor heating.

From October 17, individuals from different households in London, Essex, York, North East Derbyshire and Chesterfield were banned from mixing indoors, under Tier 2 restrictions, unless they are part of the same support bubble.

A support bubble is where a household with one adult joins with another household.

Areas of the West Midlands, the North and East Midlands are also following Tier 2 measures, which include a 10pm curfew for the hospitality sector and the ‘rule of six’ (which says only six or less people should meet together).

One wrote: ‘My mother has announced she’s buying us all fire puts and big coats for Christmas so we can sit outside and have Christmas dinner if we’re not allowed inside!’

Another said: The sale of outdoor heaters in whichever format might be the in thing this season,’ while a third joked: ‘Big year for patio heaters.’

A fourth wrote: ‘Looks like we are back at square one again despite further confusing rules! At least we get time outdoors… outdoor heaters may become the new investment.’

Meanwhile, a garden center in Ambleside, Cumbria, has seen a 32 per cent increase in outdoor heaters this week compared to this time last year. 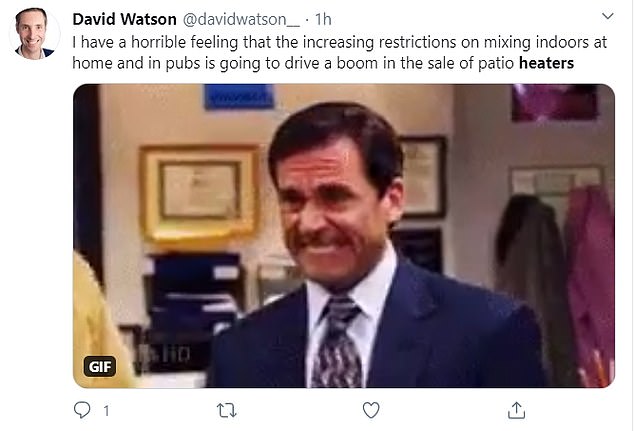 ‘As soon as the Tier 2 restrictions were announced, we saw a sharp increase in traffic and sales of outdoor heading products, with customers now planning for cosy nights in the garden rather than socialising in pubs and bars.’

Jonny Brierley, CEO of Moda Furnishings, based in Surrey, added: ‘Never before has the word “cosy “been associated with the garden. Now, however, with the increase in the availability of outdoor heating, it’s no wonder we have seen an 88 per cent increase in sales on charcoal and gas fire pits.

‘Not only do the outdoor fire pits keep you warm while the sun sets and temperatures drop, but they also act as a stylish focal point and create an ultra-cosy atmosphere.’

RuPaul's Drag Race: The Case For and Against Crowning Each Remaining Queen

From Amazon to Yelp: The companies taking a stand on reproductive rights