The Victorian government's $5.3 billion social housing package suggests a refreshing change to the prevailing view of social housing as a burden rather than an investment. Indeeed, Premier Daniel Andrews says that he didn't see this as a "cost to the budget" given the benefits of secure, affordable housing for those in need.

The details of the big housing build speak differently, however. The new investment is not in public assets. The only new public housing – which is owned and managed by the state, caps rent at 25 percent of a tenant's income, provides secure tenure and prioritises the people in greatest need – replaces housing that has already been demolished as part of another program. 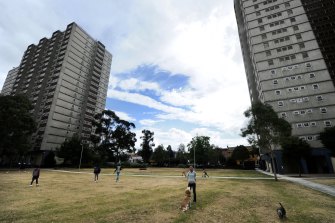 The only new public housing in the budget replaces housing that has already been demolished as part of another program.

Two-thirds of the package will go to community housing ("social housing" refers to both public and community housing). Community housing is owned and/or managed by private non-profit housing associations, its tenants pay 30 percent of their income in rent, the tenure is less secure and only 75 percent is allocated to those in greatest need.

Housing associations also draw Commonwealth Rent Assistance for their tenants, making this form of housing less cost-effective. While there is certainly a role for non-profits in delivering low-income housing, why doesn't the government build more public housing too, at less cost, with less risk, keeping the asset in public hands in perpetuity?

The answer is unfortunate. While the Premier and Housing Minister Richard Wynne appear genuinely committed to social housing in various forms, the maintenance of public housing seems an investment too far for Treasury.

International research is clear on what is needed for a fair housing system: directly provided public housing. State-built housing reduces risk and cost to taxpayers in the short and long term. A $5.3 billion spend just on public housing would deliver around 20,000 new dwellings, more if they were constructed on public land, and also keep the assets in public hands.

But governments in Australia have for decades avoided spending on public housing. The public-private model advanced in the big housing build package is in essence a continuation of the Public Housing Renewal Program, which engages private developers to replace old public housing with new social housing, their profits coming from a substantial new private housing component. Private non-profits then manage the social housing.

The UK abolished this type of arrangement two years ago after the collapse of construction firm Carillion, which left taxpayers with huge amounts of debt and undelivered projects. We are entering a phase of economic recession and volatility, in which private companies are not well-placed to follow through with essential infrastructure provision and maintenance.

Let's look at the detail of the Victorian package. The first part will spend $532 million on 500 new social homes and 540 "affordable" units (generally defined by governments as apartments leased at 80 per cent of market rent – in Melbourne, not affordable) on existing public housing estates. The targeted estates have 446 dwellings on them already. The increase in social housing units is 54. These will be managed by community housing associations and are not public housing.

The second part of the package spends $948 million to purchase units from private operators for social housing. These too will be managed by community housing associations. If Victoria had mandatory inclusionary zoning, whereby all large developments are required to deliver a social housing component (a common practice internationally), this could be achieved at no cost to government.

The fourth part commits $2.14 billion to help private developers build 5200 new houses on public land. How much of this will be social is unclear, but it too will be community and not public housing.

Victoria has 100,000 people – about 50,000 households – on the social housing waiting list. A generous assessment of the big housing build, which claims 12,200 new homes over four years, has 8200 new community housing units with the balance in "affordable", private and replacement public homes. Because allocation models differ across the tenures, only 6000 of these will be available to those in greatest need.

The package also includes a review of social housing regulations. This is important. But the panel is to report to the Assistant Treasurer, which calls into question its ability to critically examine Treasury's role in suppressing investment in public housing.

If the big housing build really were to represent a wind change, it would spend on the provision and maintenance of public housing, just as Treasury allows for other essential infrastructure. If social housing were a serious investment, it would receive a significant recurrent expenditure allocation.

The state needs sustained investment in best-value-for-money, properly affordable and secure housing that its people can rely on for decades to come. We are not there yet.

Dr David Kelly is a Research Fellow at the Centre for Urban Research, RMIT University.

Libby Porter is a Professor at the Centre for Urban Research, RMIT University.

Dr Kate Shaw is an Honorary Fellow in the School of Geography, University of Melbourne.

WWE Champions: A complete list of every title holder on Raw, SmackDown, NXT and 205 Live

Evaristo: 'Empire honours are old-fashioned but worth taking'