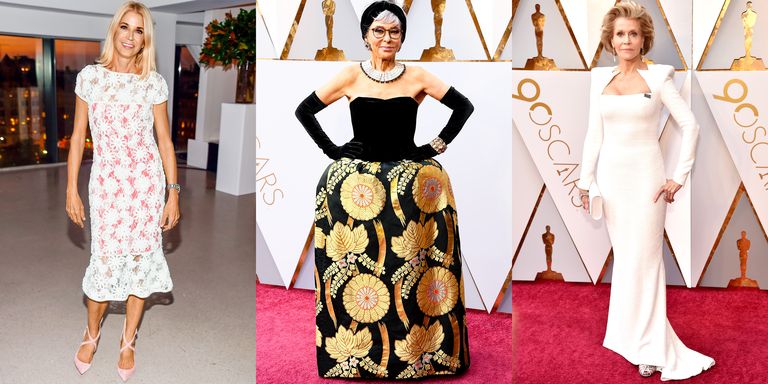 Traditionally, Right around the crossroads of age 50 and menopause, women are supposed to disappear, to fade away into a sea of other women dressed with similar decorum: short, nondescript hair; sad, sensible shoes; and plain clothing that covers as many body parts as possible.

But while the unenlightened are still debating whether women over 50 should be allowed to wear miniskirts, nothing short of a fashion revolution has been taking place on the red carpet. Think about Jane Fonda’s stunning appearance at the Emmys last fall in a floor-length fuchsia Brandon Maxwell gown with a scooped back and a long blonde ponytail. The fact that a woman of 79 would appear in public in garb generally deemed appropriate for a woman much younger felt rebellious. And then there was this year’s Oscars: Fonda, again flexing her right to wear whatever she wanted, in a perfect white Balmain column; Rita Moreno, 86, in the same black-and-gold dress she’d worn to the Academy Awards six decades before; and Eva Marie Saint, 93, presenting an award in a timeless black dress complete with ruffled-cuff sleeves. This is what fashion is about right now: breaking the rules about age-appropriate dressing for women “of a certain age.” And it’s not just happening on the red carpet.

“This is what fashion is about right now: breaking the rules about age-appropriate dressing for women “of a certain age.””

Women over 50 today look and feel younger than the women of their mothers’ generation did when they were that age. For them, the 50-plus years aren’t about sliding into retirement but about reinvention and new opportunities. Perhaps that’s why I can’t think of anyone I know who “dresses her age.” My friends and I still wear bikinis and miniskirts. We show our cleavage and our upper arms. We wear yoga pants. I see a lot of women, freed from marriages and their child-rearing days, embracing a teenage, hippie-style look. One friend has even taken to wearing her still-long hair in braids. These days, when it comes to fashion, it’s often women of a certain age who are taking some of the biggest risks. When I go into Gucci and see a floral bomber jacket emblazoned with tiger faces, and I say to the salesperson, “It’s fabulous, but who on earth would wear this?” The answer, inevitably, is an older woman. Case in point: the 89-year-old director Agnès Varda wearing Gucci floral silk pajamas to collect her Oscar at this year’s awards. A stroll down Madison Avenue gives further credence to this theory. I’ve seen women in light blue leggings and matching platform sneakers, head-to-toe black leather, and neon tracksuits. They are women with hair dyed pink and blue halfway down their backs. If you didn’t see their faces, you might mistake them for women much younger. Maybe that’s why there’s always a certain defiance in their attitude. Which is understandable.

“These days, when it comes to fashion, it’s often women of a certain age who are taking some of the biggest risks.”

It’s hard to break free from all the negative messages we’ve absorbed about fashion and age, as I discovered recently when debating whether or not to buy a pair of gorgeous hot-pink neoprene boots. Twenty years ago, I would have snapped them up. But now? The old-fashioned voice in my head told me that hot-pink boots were not appropriate for a woman of my age. They were too showy. Too attention-grabbing. I thought that people would look at the shoes and all they’d see was a 60-year-old woman. And then I remembered Jane Fonda. She broke the rules because she had the guts to be seen. She didn’t blend in; she didn’t disappear. Needless to say, I bought the boots.