In May, as Australian states wound back restrictions after the first lockdown, our hotel quarantine scheme was the crown jewel in our country’s defence against the ravages of the coronavirus.

But already the defences – at least in Victoria- were badly damaged by a botched hotel scheme that sadly proved no match for the virus.

By the end of June, international flights were diverted from Melbourne as the local hotel quarantine scheme was wound up, which led, inevitably to other states clamping down on the prodigals they were prepared to receive. 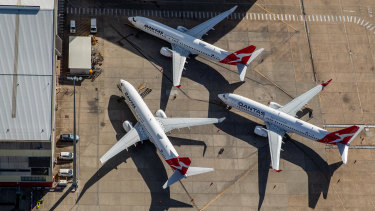 At the same time, Border Force has thrown a cordon around international departures, refusing three out of four applications to leave the country, even as nations such as New Zealand allow its residents to leave with their blessings.

Getting permission to leave the country is not straightforward and confusion abounds about what counts as a compassionate reason. Proving an immediate family member is gravely ill, or that you are in a relationship with someone, is not easy. It takes letters from doctors overseas, as well as the production of birth certificates, photographs and other documents. And it takes time to gather that evidence. The Sunday Age believes the rules could be reviewed to allow more Australians to freely depart.

But this comes with the caveat that those who leave must understand the terms under which they can come back. Even now, as Melbourne endures a stage four lockdown, we can hope to wipe out community transmission in this state and live without the terrible tolls endured in countries such as the UK, where deaths have literally been too many to count.

The rights of an individual must be balanced against the needs of the community, which must be protected from reinfection.

To do this we have quarantine and in many states require those who return to Australia to pay for their own quarantine period.

The hotel inquiry has made clear that we cannot allow travellers back into Victoria until we have strict infection control regulations, accountable oversight and a well-drilled security presence, ideally supported by the armed forces.

It is also clear that those who return must understand the rules: 14 days in a hotel room can take a toll on mental health, but it protects the entire nation’s wellbeing. Any outside breaks must be well-policed fresh-air excursions, not shopping trips.

We do need to find a way to help people return. While the government says they warned Australians to come home months ago, this glosses over the complex situations in which many people find themselves – obligations such as jobs, families and study are not easily abandoned. The government must work with the airlines to put in place an orderly passage home for those stranded overseas, working to a quota everyone understands, allowing people to plan their wait. We welcome Mr Morrison’s announcement on Friday that he had asked Defence and Foreign Affairs to come up with ways to help these Australians. But they must also help us, by being willing to wait both for the ticket home and the quarantine period when they return.

The separation of loved ones across the globe has been a terrible hardship – in the past five months, there have been untold births, marriages and deaths in foreign lands that Australians have missed. Many dream of holidays, but a far greater number simply want to be reunited with those they love, perhaps for the last time.

These are important moments of connection, rites of passage that give meaning to life and to human existence, especially at a time of such social upheaval. And they will not be repeated. Parents are also struggling to see their children. Couples are stranded apart.

Getting permission from the Australian Border Force to leave the country is not straightforward and confusion abounds about what counts as a compassionate reason. Reports suggest many people are not even bothering to try. For others, the process has compounded their distress.

Note from the Editor

The Age’s acting editor, Michelle Griffin, writes a weekly newsletter exclusively for subscribers. To have it delivered to your inbox, please sign up here.

'It's just gone': Wennington grandmother losing her home in wildfires

What does 'snowflake' mean, who are 'generation snowflake' and what's the origin of the term?

‘Collusion’ and the insane media divide