Is THIS Britain’s unhealthiest takeaway? Scottish chippy sells a box of fried foods containing nearly 7,000 calories for £10 (but some joke it’s a ‘Glasgow salad’)

A Scottish chippy is selling what may be Britain’s unhealthiest takeaway: a giant box of deep-fried foods that contains an artery-clogging 7,000 calories.

The ‘Crunchy Box’ also comes with a two-litre bottle of Irn-Bru which takes the calorie count to a whopping 6,792 kcal. 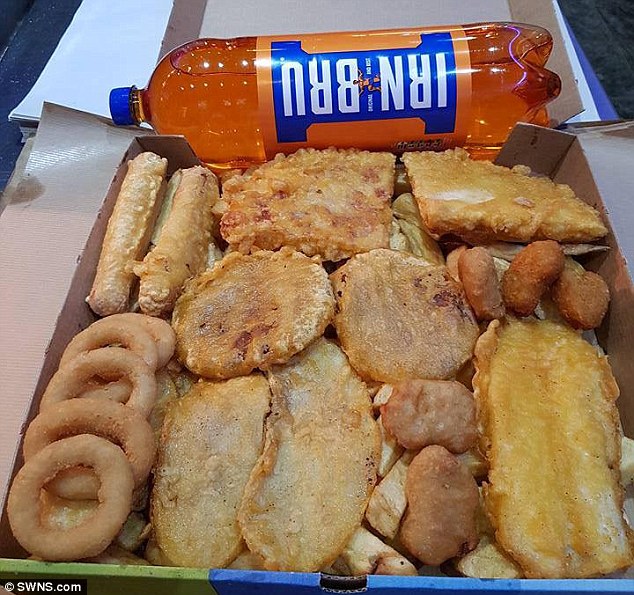 The Family Crunch Box, which is £10 from the East West Spice takeaway chippy in Greenock, Scotland, contains (from left to right): two sausages, five onion rings, potato fritters, two pizza slices, two hamburgers, two chicken nuggets, and fish on a bed of chips – all of which are battered and deep-fried. It also comes with a two-litre bottle of traditional Scottish beverage, Irn Bru

Although health campaigners have slammed the box as ‘gross,’ the shop manager, Bahadur Singh, says his customers love the deal.

He added that it is designed for more than one person as it is called the Family Crunch Box.

He said: ‘I just thought it would be nice to combine the ideas and bring something which would appeal to everyone.

‘We put the deal on and people seem to love it. Everything is cooked in fat but the dish is big enough for three or four people to share. 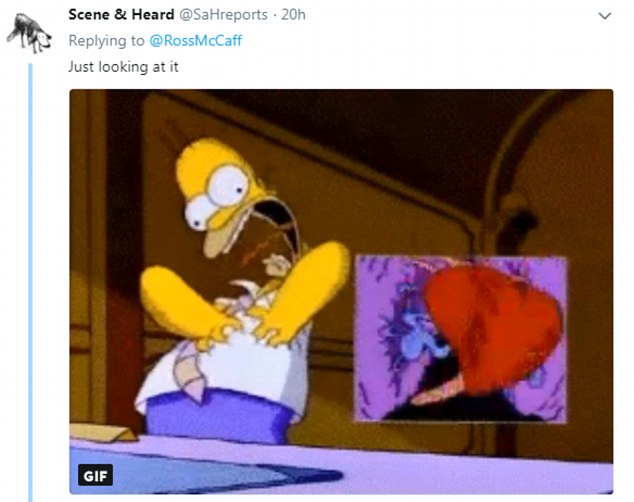 Writer Ross McCafferty sent the meal deal viral when he tweeted a photo of it on Twitter as the takeaway restaurant is in his hometown of Greenock. Twitter users found the picture hilarious and it received 9.4k likes

‘It’s definitely for the family to eat. People think it’s a great deal.’

The deal went viral with more than 9,000 likes after writer Ross McCafferty tweeted a photo of the beige meal deal on Twitter.

He joked: ‘A chippy in my hometown is selling this ‘crunch box’ for a TENNER and if you don’t think it looks like the most appetizing thing ever then there’s no hope for you.’

Takeaway fans have been sharing the post online, with one saying on Facebook that it was ‘the most Scottish thing I’ve seen’.

Another joked that the box would make a ‘nice starter,’ while one said that the box of fried foods was considered a ‘Glasgow salad’.

The box of fried foods can come with gravy or curry sauce as an optional extra.

Tam Fry, of the National Obesity Forum, said he despaired that such deals were still allowed.

He said: ‘It is gross. They will say it’s a family meal so it’s not too much, but I would be extremely worried about the type of food this family were eating.

‘I haven’t calculated the number of calories but it will be an enormous number. It also shows the irresponsibility of the out-of-home sector that they have totally ignored the Scottish Government’s desperate efforts to try and get people interested in healthy eating.

‘To top it all off with the Irn Bru is just out of this world. It’s a perfect example of everything we stand against in the fight against obesity.’

In 2014 Pizza Hut was panned by health campaigners after unveiling a new ‘Cheeseburger Pizza’ that contained 3,000 calories – half as much as the Family Crunch Box.

Couple act: Glenn Close on playing the woman behind the man in The Wife

'This Is Us': The Biggest Tearjerker Moments So Far (Photos)