Of the many challenges presented by life as the wife of the nation's Opposition Leader, being presented unexpectedly to a prime minister while she is at home in her "trackies" is one that stands out for Chloe Shorten.

It happened to her when her husband, Labor leader Bill Shorten, called to introduce her to New Zealand leader Jacinda Ardern. 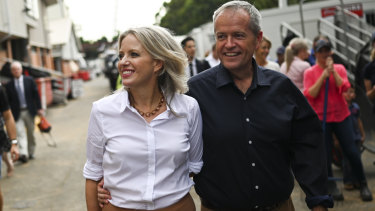 Chloe Shorten, campaigning with husband Bill on the weekend, is acknowledged by Labor insiders as a huge advantage for him.Credit:AAP

"With Bill's constant travel we have to do every possible app, every piece of technology," said Ms Shorten, who has been accompanying her husband on the campaign.

"It can get a bit embarrassing because he might FaceTime me in my trackies, putting a child to sleep and 'Bing! Hello?' – Bill is there with his colleagues, all dressed in their suits."

Ms Shorten's easy ability to connect with people at public events and on meet-and-greet outings is widely acknowledged by Labor insiders as a huge advantage for her husband. So much so, that she is considered one of Mr Shorten's best assets as he strives to become Australia's 31st prime minister.

In the run up to the May 18 election, Ms Shorten has given what is expected to be her only interview to Nine's Future Women platform, saying, should her husband become prime minister, she will use her visibility to promote feminist causes, including efforts to reduce violence against women.

"I think that I will always bang on about the things that are very unjust for women because they are still there," Ms Shorten told Future Women's Jamila Rizvi.

"I have two daughters and I want my son to become a man for others. That means seeing things through a different lens to a generation ago."

She said she was baffled that more conservative women did not identify as feminists. "It beggars belief. My dad is a feminist, my brothers are all feminists, my husband is a feminist.

There is no case study for living in the huge era of technological change, social media, public life and politics.

"You know the pub test? I have the teen test… And the idea that there is this false binary that if women get equality, men will lose out? That just doesn't pass the teen test." 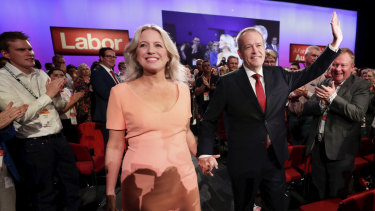 Chloe Shorten, pictured with her Labor leader-husband, Bill Shorten, says she will work to promote an end to violence against women if Mr Shorten is elected Prime Minister.Credit:Alex Ellinghausen

Ms Shorten, a former Queensland-based marketing executive, said she keeps herself and her Moonee Ponds family – the Shortens' daughter, Clementine, 9, as well as her two children from her first marriage, Rupert and Georgette (Gigi) – focused on the short term.

"I keep myself as firmly planted in the now and in the day and in the moment as I can," she said.

"It means not looking back too much and worrying about what's gone before and not extrapolating myself into the future: not buying into the inevitability of where my life is going, and not explaining to people what my life might look like in the future when I do not even know myself."

Her parenting strategy is to keep the children well informed about what is happening around them.

"There is no case study for living in the huge era of technological change, social media, public life and politics… Part of the strategy is telling the kids, 'This is what happened today, and this is how we're going to handle what happened today,'" she said.

"I keep routines and rituals going. The resilience you can build into so many parts of life, particularly when there are periods of stress, is to lean back on the mattress of ritual. I do that for myself too."

Maluma Reveals He Has a Crush on Kendall Jenner

Paul Bloch, Publicist to the Stars and Rogers & Cowan Chairman, Dies at 78