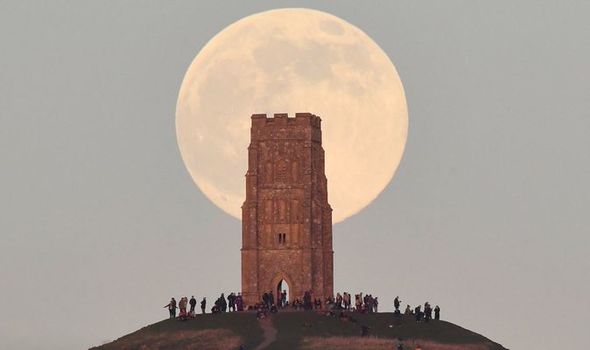 The year’s first full moon dwarfed St Michael’s Tower at the peak of the 520ft Somerset hill yesterday, providing photographers with jaw-dropping pictures in the clear sky. The dramatic scenes were replicated across the country.

The Wolf Moon seemed to dance around the historic stonework of 11thcentury Ely Cathedral in Cambridgeshire, as well as dominating a terrace of smart houses in the centre of Bristol and creating a tranquil image behind St

There were capital sights to be seen in London too as the full moon shone pin-sharp over the 72-storey Shard glass skyscraper while its silhouette of a Thames cable car reminded onlookers of a scene from blockbuster film ET.

Wolf Moons were given the name by native North Americans as the beasts howl more in winter while seeking scarce food.

January’s full moon is also known as the Ice Moon and Old Moon.

It stays for around three days while the Earth is positioned between the sun and moon.

Next month’s full moon, known as the Snow Moon after frequent falls at that time of year, will be visible on February 16. It will be followed on March 16 by the Worm Moon – so named as worms surface when spring warms the earth.