In-N-Out Burger failed to live up to its name Friday as a 14-hour-long line formed at its first Colorado locations, prompting a brawl between waiting customers.

The popular California-based fast-food chain opened two locations in the state, one in Colorado Springs and one in Aurora. The latter of the two locations saw wait times up to 14 hours. For context, one could drive from Aurora, Colo., to the In-N-Out in Orem, Utah, in only 8 hours. A roundtrip would only slightly be longer than waiting in the drive-thru line at the newest location.

At one point, the Aurora Police Department tweeted out a warning about the drive-thru wait times, which had hit 12 hours by about 4:30 p.m. on opening day.

THE WENDY'S FROSTY: 4 THINGS YOU NEVER KNEW ABOUT THE CHAIN'S SIGNATURE DESSERT

Police were ready for any issues that may arise among the thousands of fans eager to lock down the chain’s signature Double Double and animal-style fries. And one such incident did happen at the Aurora outpost.

In a video shared on Twitter, a group is seen fighting next to their cars. At one point, one of the men involved in the brawl loses his pants and a fifth person – identified by the person filming as In-N-Out security – comes up to seemingly break up the battle.

The person who recorded the video claimed the fight happened after one of the drivers refused to let a car in front of him in line, but that car cut him off anyway, the Daily Mail reported. 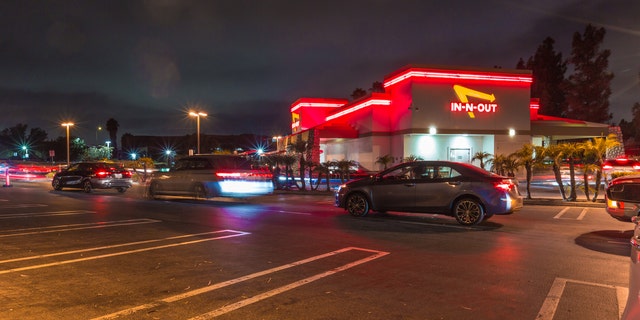 The lines at the Aurora location got up to 14 hours opening day.
(iStock)

No other fights were reported either at the eatery or inline. By Saturday, police tweeted that lines have been reduced to about 8 hours for the drive-thru and 1 hour for carry-out.

The lines are reminiscent of what Popeyes stores saw for its chicken sandwich, which prompted traffic mayhem and in some instances, violence when it was released. At least one altercation ended in a fatal stabbing over the coveted sandwich.